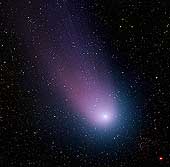 Though frequently beautiful, comets traditionally have stricken terror as often as they have generated wonder as they arc across the sky during their passages around the Sun. Astrologers interpreted the sudden appearances of the glowing visitors as ill omens presaging famine, flood or the death of kings. Even as recently as the 1910 appearance of Halley's Comet, entrepreneurs did a brisk business selling gas masks to people who feared Earth's passage through the comet's tail.

In the 4th century B.C., the Greek philosopher Aristotle concluded that comets were some kind of emission from Earth that rose into the sky. The heavens, he maintained, were perfect and orderly; a phenomenon as unexpected and erratic as a comet surely could not be part of the celestial vault. In 1577, Danish astronomer Tycho Brahe carefully examined the positions of a comet and the Moon against the star background Using observations of the comet made at the same time from two different locations, Tycho noted that both observers saw the comet nearly in the same location with respect to the background stars. If the comet was closer than the moon, this would not have been the case. This so-called parallax effect can be demonstrated if you hold up a finger and look at it while closing one eye and then the other. Tycho concluded that the comet was at least six times farther away than the moon.

A hundred years later, the English physicist Isaac Newton established that a comet appearing in 1680 followed a nearly parabolic orbit. The English astronomer Edmond Halley used Newton's method to study the orbits of two dozen documented cometary visits. The orbits of three comets seen in 1531, 1607 and 1682 were so similar that he concluded they in fact were appearances of a single comet wheeling around the Sun in a closed ellipse every 75 years or so. He successfully predicted the next visit in 1758-9, and the comet thereafter bore his name.

Since then, astronomers have concluded that some comets return relatively frequently, in intervals ranging from 3 to 200 years; these are called "short-period" comets. Others have enormous orbits that bring them back only once in hundreds of millennia.

In the mid-1800s, scientists also began to turn their attention to the question of comets' composition. Astronomers noted that several major meteor showers took place when Earth passed through the known orbits of comets, leading them to conclude that the objects are clumps of dust or sand. By the early 20th century, astronomers studied comets using the technique of spectroscopy, breaking down the color spectrum of light given off by an object to reveal the chemical makeup of the object. They concluded that comets also emitted gases and molecular ions in addition to the grains of dust.

In 1950, the American astronomer Fred L. Whipple (1906-2004) authored a major paper proposing what became known as the "dirty snowball" model of the cometary nucleus. This model, which has since been widely adopted, pictures the nucleus as a mixture of dark organic material, rocky grains and water ice. ("Organic" means that the compound is based on carbon and hydrogen, but is not necessarily biological in origin.) Most nuclei of comets range in size from about 1 to 10 kilometers (1/2 to 6 miles) in diameter.

If comets contain icy material, they must originate somewhere much colder than the relatively warm inner solar system. In 1950, the Dutch astronomer Jan Hendrik Oort (1900-1992) used indirect reasoning from observations to predict the existence of a vast cloud of comets orbiting many billions of miles from the Sun -- perhaps 50,000 astronomical units (AU) away (one AU is the distance from Earth to the Sun), or nearly halfway to the next nearest star. This region has since become known as the Oort Cloud.

A year later, the Dutch-born American astronomer Gerard Kuiper (1905-1973) pointed out that there should be comet-like objects remaining in the outer planetary region after the solar system formation process was complete.. He suggested the existence of a belt of dormant comets lying just outside the orbits of the planets at perhaps 30 to 100 AU from the Sun; this has become known as the Kuiper Belt. (Other astronomers such as Frederick Leonard and Kenneth Edgeworth also speculated about the existence of such a belt in the 1930s and 1940s, and so the region is sometimes referred to as the Edgeworth-Kuiper Belt, the Leonard-Edgeworth-Kuiper Belt, and so on.) The Kuiper Belt is now known to be the source of those comets with relatively short orbital periods about the sun. Close encounters with other dormant comets sometimes change their orbits so that they venture in toward the Sun and fall under the influence of the gravities of the giant outer planets -- first Neptune, then Uranus, then Saturn and finally Jupiter.

The Oort Cloud, by contrast, would be the home of long-period comets. They are periodically nudged from their orbits by any one of several influences -- perhaps the gravitational pull of a passing star or giant molecular cloud, or tidal forces of the Milky Way Galaxy.

In addition to the length of time between their visits, another feature distinguishes short- and long-period comets. The orbits of short-period comets are all fairly close to the ecliptic plane, the plane in which Earth and most other planets orbit the Sun. Long-period comets, by contrast, dive inwards toward the Sun from virtually any part of the sky. This suggests that the Kuiper Belt is a relatively flat belt, whereas the Oort Cloud is a three-dimensional sphere surrounding the solar system.

Where did the Oort Cloud and Kuiper Belt come from? Most astronomers now believe that the material that became comets condensed in the outer solar system around the orbits of Uranus and Neptune and beyond. Gravitational effects from those giant planets flung some of the comets outward to the Oort cloud, while the comets in the Kuiper Belt may have remained there.

Residing at the farthest reaches of the Sun's influence, comets did not undergo the same heating as the rest of the objects in the solar system, so they retain, largely unchanged, the original composition of solar system materials. As the preserved building blocks of the outer solar system, comets offer clues to the chemical mixture from which the planets formed some 4.6 billion years ago.

The geologic record of the planets shows that, about 3.9 billion years ago, a period of heavy cometary and asteroidal bombardment tapered off. The earliest evidence of life on Earth dates from just after the end of this heavy bombardment. The constant barrage of debris had vaporized any water on Earth, leaving the planet too hot for the survival of the fragile carbon-based molecules upon which life is based. Scientists therefore wonder: How could life form so quickly when there was so little liquid water or carbon-based molecules on Earth's surface? The answer may be that comets, which are abundant in both water and carbon-based molecules, delivered essential ingredients for life to begin.

Comets are also at least partially responsible for the replenishment of Earth's oceans after the vaporization of an early ocean during the late heavy bombardment. While Earth has long been regarded as the "water planet," it and the other terrestrial planets (Mercury, Venus and Mars) are actually poor in the percentage of water ice and in carbon-based molecules they contain when compared to objects that reside in the outer solar system at Jupiter's orbit or beyond. Comets are about 50 percent water by weight and about 10 to 20 percent carbon by weight. It has long been suspected that what little carbon and water there is on Earth was delivered here by objects such as comets that came from a more water-rich part of the solar system.

While comets are a likely source for life's building blocks, they have also played a devastating role in altering life on our planet. A comet or asteroid is credited as the likely source of the impact that changed Earth's climate, wiped out the dinosaurs and gave rise to the age of mammals 65 million years ago.