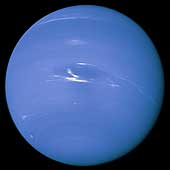 In the long run men hit only what they aim at.
- Thoreau


Neptune is the outermost planet of the gas giants. It has an equatorial diameter of 49,500 kilometers (30,760 miles). If Neptune were hollow, it could contain nearly 60 Earths. Neptune orbits the Sun every 165 years. It has eight moons, six of which were found by Voyager. A day on Neptune is 16 hours and 6.7 minutes. Neptune was discovered on September 23, 1846 by Johann Gottfried Galle, of the Berlin Observatory, and Louis d'Arrest, an astronomy student, through mathematical predictions made by Urbain Jean Joseph Le Verrier.

The first two thirds of Neptune is composed of a mixture of molten rock, water, liquid ammonia and methane. The outer third is a mixture of heated gases comprised of hydrogen, helium, water and methane. Methane gives Neptune its blue cloud color.

Neptune is a dynamic planet with several large, dark spots reminiscent of Jupiter's hurricane-like storms. The largest spot, known as the Great Dark Spot, is about the size of the earth and is similar to the Great Red Spot on Jupiter. Voyager revealed a small, irregularly shaped, eastward-moving cloud scooting around Neptune every 16 hours or so. This scooter as it has been dubbed could be a plume rising above a deeper cloud deck.

The strongest winds on any planet were measured on Neptune. Most of the winds there blow westward, opposite to the rotation of the planet. Near the Great Dark Spot, winds blow up to 2,000 kilometers (1,200 miles) an hour.

Neptune has a set of four rings which are narrow and very faint. The rings are made up of dust particles thought to have been made by tiny meteorites smashing into Neptune's moons. From ground based telescopes the rings appear to be arcs but from Voyager 2 the arcs turned out to be bright spots or clumps in the ring system. The exact cause of the bright clumps is unknown.

The magnetic field of Neptune, like that of Uranus, is highly tilted at 47 degrees from the rotation axis and offset at least 0.55 radii (about 13,500 kilometers or 8,500 miles) from the physical center. Comparing the magnetic fields of the two planets, scientists think the extreme orientation may be characteristic of flows in the interior of the planet and not the result of that planet's sideways orientation or of any possible field reversals at either planet.

Neptune
This picture of Neptune was taken by Voyager 2 on August 20, 1989. One of the great cloud features, dubbed the Great Dark Spot by Voyager scientists, can be seen toward the center of the image. It is at a latitude of 22 degrees south and circuits Neptune every 18.3 hours. The bright clouds to the south and east of the Great Dark Spot constantly change their appearances in periods as short as four hours. (Copyright Calvin J. Hamilton)

The Interior of Neptune
Our knowledge of the internal structure of Neptune is inferred from the planet's radius, mass, period of rotation, the shape of its gravitational field and the behavior of hydrogen, helium, and water at high pressure. This cut-away view shows Neptune composed of an outer envelope of molecular hydrogen, helium and methane roughly the mass of one to two Earths. Below this region Neptune appears to be composed of a mantle rich in water, methane, ammonia, and other elements. These elements are under high temperatures and pressures deep within the planet. The mantle is equivalent to 10 to 15 earth masses. Neptune's core is composed of rock and ice, and is likely no more than one Earth mass. (Copyright Calvin J. Hamilton)

HST Observes Triton and Neptune
This mosaic combines an almost true-color picture of Neptune taken by the Hubble Space Telescope's (HST) Wide Field Planetary Camera (WFPC), with a picture of Triton taken with the HST's Faint Object Camera. Although faint, the image of Triton vaguely shows a brighter equatorial region. The south pole is to the lower left.

HST Observations of Neptune
These almost true-color pictures of Neptune were constructed from HST/WFPC2 images taken in blue (467-nm), green (588-nm), and red (673-nm) spectral filters. There is a bright cloud feature at the south pole, near the bottom right of the image. Bright cloud bands can be seen at 30S and 60S latitude. The northern hemisphere also includes a bright cloud band centered near 30° N latitude. The second picture was compiled from images taken after the planet had rotated about 180 degrees of longitude (about 9 hours later) to show the opposite hemisphere.

One feature that is conspicuous by its absence is the storm system known as the Great Dark Spot. The second smaller dark spot, DS2, that was seen during the Voyager-2 encounter was also missing. The absence of these dark spots was one of the biggest surprises of this program. These dramatic changes in the large-scale storm systems and planet-encircling clouds bands on Neptune are not yet completely understood, but they emphasize the dynamic nature of this planet's atmosphere, and the need for further monitoring.

HST Observes High Altitude Clouds
These three images were taken on October 10, October 18 and November 2, 1994, when Neptune was 4.5 billion kilometers from Earth. Building on Voyager's initial discoveries, Hubble has revealed that Neptune has a remarkably dynamic atmosphere that changes over just a few days. The temperature difference between Neptune's strong internal heat source and its frigid cloud tops (-162° Celcius or -260° Fahrenheit) might trigger instabilities in the atmosphere that drive these large-scale weather changes. The pink features are high-altitude methane ice crystal clouds.

HST Finds New Dark Spot
In June 1994, the Hubble telescope revealed that the Great Dark Spot found by Voyager 2 was missing. This new image taken on November 2, shows that a new spot near the limb of the planet has formed. Like its predecessor, the new spot has high altitude clouds along its edge, caused by gasses that have been pushed to higher altitudes where they cool to form methane ice crystal clouds. The dark spot may be a zone of clear gas that is a window to a cloud deck lower in the atmosphere.

Cirrus-like Clouds
This image shows bands of sunlit cirrus-like clouds in Neptune's northern hemisphere. These clouds cast shadows on the blue cloud deck 35 miles below. The white streaky clouds are from 48 to 160 kilometers (30 to 100 miles) wide and extend for thousands of miles. (Copyright Calvin J. Hamilton)

True-color Image
This Voyager 2 image has been processed by computers so that both the clouds' structure in the dark regions near the pole and the bright clouds east of the Great Dark Spot are visible. Small trails of clouds trending east to west and large-scale structure east of the Great Dark Spot all suggest that waves are present in the atmosphere and play a large role in the type of clouds that are visible. (Courtesy NASA/JPL)

Great Dark Spot
Feathery white clouds fill the boundary between the dark and light blue regions on the Great Dark Spot. The pinwheel shape of both the dark boundary and the white cirrus suggests that the storm system rotates counterclockwise. Periodic small scale patterns in the white cloud, possibly waves, are short lived and do not persist from one Neptunian rotation to the next. (Courtesy NASA/JPL)

Change In The Great Dark Spot
The bright cirrus-like clouds of Neptune change rapidly, often forming and dissipating over periods of several to tens of hours. In this sequence spanning two rotations of Neptune (about 36 hours) Voyager 2 observed cloud evolution in the region around the Great Dark Spot at an effective resolution of about 100 kilometers (62 miles) per pixel. The surprisingly rapid changes which occur over the 18 hours separating each panel shows that in this region Neptune's weather is perhaps as dynamic and variable as that of the Earth. However, the scale is immense by our standards. The Earth and the Great Dark Spot are of similar size and in Neptune's frigid atmosphere, where temperatures are as low as 55 degrees Kelvin (-360 F), the cirrus clouds are composed of frozen methane rather than Earth's crystals of water ice. (Courtesy NASA/JPL)

Parting Look
This Voyager 2 image shows a beautiful dual-crescent view of Neptune and Triton. The image, acquired on August 31, 1989, is a parting tribute of the Voyager mission. (Copyright Calvin J. Hamilton)

Small Dark Spot
This image shows the Small Dark Spot, which is south of the Great Dark Spot. The small spot is thought to be a storm in Neptune's atmosphere, perhaps similar to Jupiter's Great Red Spot. (Copyright Calvin J. Hamilton)

Neptune Rings
These two 591-second exposures of the rings of Neptune were taken by Voyager 2 on August 26, 1989 from a distance of 280,000 kilometers (174,000 miles). The two main rings are clearly visible and appear complete over the region imaged. Also visible in this image is the inner faint ring at about 42,000 kilometers (25,000 miles) from the center of Neptune, and the faint band which extends smoothly from the 53,000 kilometer (33,000 miles) ring to roughly halfway between the two bright rings. The bright glare in the center is due to over-exposure of the crescent of Neptune. Numerous bright stars are evident in the background. Both rings are continuous. (Courtesy NASA/JPL)

Twisted Rings
This portion of one of Neptune's rings appears to be twisted. Scientists believe it looks this way because the original material in the rings was in clumps that formed streaks as the material orbited Neptune. The motion of the spacecraft added to the twisted appearance by causing a slight smearing in the image. (Courtesy NASA/JPL)

The following table is a summary of the rings of Neptune.

The following table summarizes the radius, mass, distance from the planet center, discoverer and the date of discovery of each of the moons of Neptune: