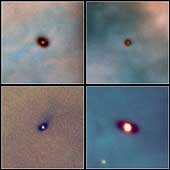 Planetary System Formation
"The created world is but a small parenthesis in eternity."
— Thomas Browne
Planetary system formation coincides with the process of star formation in which our Sun belongs to the generation of stars created 4.6 billion years ago, when our galaxy was roughly half its present age. A cloud of interstellar gas, dust, and ices containing several generations of material collapsed to form the nebula from which the Sun and the rest of our solar system grew. This collapse may have been triggered by a nearby supernova. Cosmologists believe that because the material in the nebula was rotating to some degree, not all of the nebular material fell directly into the central mass that would become the Sun. Instead, some of the material was confined to a flat, spinning disk, called a protoplanetary disk, around a young Sun. As time went on, the grains and ices in the disk bumped into and stuck to one another forming macroscopic objects with sizes on of order 0.01-10 meters, all orbiting in the same direction and same plane analogus to the rings around Saturn. As the objects grew larger, their gravitational forces increased, attracting more matter from the disk and gradually building kilometer-sized bodies called planetesimals. These planetesimals further collided and either shattered into fragments or merged producing larger objects. The gravitational pull of the largest planetesimals produced rapid growth to the size of small planets and formed the nuclei of the planets as we know them today.

Some planetesimals in the outer solar system became large enough to accrete gas forming the giant planets Juipter, Saturn, Uranus, and Neptune. Because of the higher temperatures in the inner solar system, accretion of ice and gas was inhibited so the planetesimals grew into what is known as the rocky terrestrial planets. Planetary growth slowed down significantly once a gap was cleared within its orbit. But even today planets continue to grow by small amounts as they sweep up micrometeor dust particles or are impacted every few million years by larger asteroids or comets such as the dramatic impact of comet Shoemaker-Levy with Jupiter.

Planetesimals that became modest in size but did not merge to form larger bodies became asteroids and comets. The asteroid belt may be result of fragmentation of planetisimals that were prevented from growing larger by the close proximity of Jupiter's gravitational pull. Other planetesimals were tossed about into random orbits from gravitational interaction with the larger planets. The Oort Cloud was formed early in the history of the solar system through gravitational interaction of planetisimals with Uranus and Neptune. (Close encounters with Saturn and Jupiter would have ejected the objects out of the solar system.) These planetisimals were thrown outwards close to the Solar System escape velocity. The Oort cloud consists of some 1,000,000,000,000 long-period comets that extends out to tens of thousands of AU, half way to our closest stellar neighbors. Comets found within Kuiper Belt may be early remnants of the Sun's protoplanetary disk. Additional debris left over from the earliest phases of solar system formation includes small grains of sand and small Meteorids.