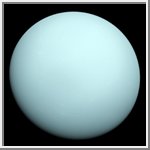 The important thing is not to stop questioning.
- Albert Einstein

Uranus is the seventh planet from the Sun and is the third largest in the solar system. It was discovered by William Herschel in 1781. It has an equatorial diameter of 51,800 kilometers (32,190 miles) and orbits the Sun once every 84.01 Earth years. It has a mean distance from the Sun of 2.87 billion kilometers (1.78 billion miles). It rotates about its axis once every 17 hours 14 minutes. Uranus has at least 22 moons. The two largest moons, Titania and Oberon, were discovered by William Herschel in 1787.

The atmosphere of Uranus is composed of 83% hydrogen, 15% helium, 2% methane and small amounts of acetylene and other hydrocarbons. Methane in the upper atmosphere absorbs red light, giving Uranus its blue-green color. The atmosphere is arranged into clouds running at constant latitudes, similar to the orientation of the more vivid latitudinal bands seen on Jupiter and Saturn. Winds at mid-latitudes on Uranus blow in the direction of the planet's rotation. These winds blow at velocities of 40 to 160 meters per second (90 to 360 miles per hour). Radio science experiments found winds of about 100 meters per second blowing in the opposite direction at the equator.

Uranus is distinguished by the fact that it is tipped on its side. Its unusual position is thought to be the result of a collision with a planet-sized body early in the solar system's history. Voyager 2 found that one of the most striking influences of this sideways position is its effect on the tail of the magnetic field, which is itself tilted 60 degrees from the planet's axis of rotation. The magnetotail was shown to be twisted by the planet's rotation into a long corkscrew shape behind the planet. The magnetic field source is unknown; the electrically conductive, super-pressurized ocean of water and ammonia once thought to lie between the core and the atmosphere now appears to be nonexistent. The magnetic fields of Earth and other planets are believed to arise from electrical currents produced in their molten cores.

In 1977, the first nine rings of Uranus were discovered. During the Voyager encounters, these rings were photographed and measured, as were two other new rings and ringlets. Uranus' rings are distinctly different from those at Jupiter and Saturn. The outermost epsilon ring is composed mostly of ice boulders several feet across. A very tenuous distribution of fine dust also seems to be spread throughout the ring system.

There may be a large number of narrow rings, or possibly incomplete rings or ring arcs, as small as 50 meters (160 feet) in width. The individual ring particles were found to be of low reflectivity. At least one ring, the epsilon, was found to be gray in color. The moons Cordelia and Ophelia act as shepherd satellites for the epsilon ring.

Uranus
The greenish color of it atmosphere is due to methane and This view of Uranus was acquired by Voyager 2 on January 10, 1986. The blue-green appearance of its atmosphere results from methane and high-altitude photochemical smog. This gas absorbs red wavelengths from the incoming sunlight, leaving the predominant bluish color seen here. Towards the bottom of the image a few clouds can be seen. This image is one of the few Voyager pictures that shows this type of cloud. (Copyright Calvin J. Hamilton)

The Interior of Uranus
Our knowledge of the internal structure of Uranus is inferred from the planet's radius, mass, period of rotation, the shape of its gravitational field and the behavior of hydrogen, helium, and water at high pressure. Its internal structure is similar to that of Neptune except for the fact that it is less active in terms of atmospheric dynamics and interior heat flow.

This cut-away view shows Uranus composed of an outer envelope of molecular hydrogen, helium and methane roughly the mass of one to two Earths. Below this region Uranus appears to be composed of a mantle rich in water, methane, ammonia, and other elements. These elements are under high temperatures and pressures deep within the planet. The mantle is equivalent to 10 to 15 earth masses. Uranus's core is composed of rock and ice, and is likely no more than one Earth mass. (Copyright Calvin J. Hamilton) 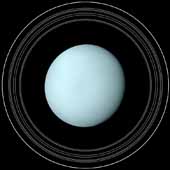 Uranus with its Rings
This is the highest resolution image of Uranus with its rings ever assembled. Four separate images were mosaicked together to create the picture of Uranus. The rings were made from two high resolution images of Uranus's rings in which a strip was cut out and projected for a full 360 degrees. The rings and planet are to scale and shows the view Voyage 2 had of at the time the images were taken. The rings shown in the picture are Epsilon, Delta, Gamma, Eta, Beta, Alpha, 4, 5, and 6. Although there are other rings, these are the ones that could be seen on the Voyger 2 images at the point in time in which the pictures were taken. (Copyright Calvin J. Hamilton)

Uranus in True and False Color
These two pictures of Uranus, one in true color (left) and the other in false color, were compiled from images returned January 17, 1986, by the narrow-angle camera of Voyager 2. The spacecraft was 9.1 million kilometers (5.7 million miles) from the planet, several days from closest approach. The picture at left has been processed to show Uranus as human eyes would see it from the vantage point of the spacecraft. The picture is a composite of images taken through blue, green and orange filters. The darker shadings at the upper right of the disk correspond to the day-night boundary on the planet. Beyond this boundary lies the hidden northern hemisphere of Uranus, which remains in total darkness as the planet rotates. The blue-green color results from the absorption of red light by methane gas in Uranus' deep, cold and remarkably clear atmosphere. The picture at right uses false color and extreme contrast enhancement to bring out subtle details in the polar region of Uranus. Images obtained through ultraviolet, violet and orange filters were respectively converted to the same blue, green and red colors used to produce the picture at left. The very slight contrasts visible in true color are greatly exaggerated here. In this false-color picture, Uranus reveals a dark polar hood surrounded by a series of progressively lighter concentric bands. One possible explanation is that a brownish haze or smog, concentrated over the pole, is arranged into bands by zonal motions of the upper atmosphere. The bright orange and yellow strip at the lower edge of the planet's limb is an artifact of the image enhancement. In fact, the limb is dark and uniform in color around the planet. (Courtesy NASA/JPL)

Voyager Farewell Image
This view of Uranus was recorded by Voyager 2 on January 25, l986, as the spacecraft left the planet behind and set forth on its cruise to Neptune. Voyager was 1 million kilometers (620,000 miles) from Uranus when it acquired this wide-angle view. The picture has a resolution of 140 kilometers (90 miles). The thin crescent of Uranus is seen at an angle of 153 degrees between the spacecraft, the planet and the Sun. Even at this extreme angle, Uranus retains the pale blue-green color seen by ground-based astronomers and recorded by Voyager during its historic encounter. This color results from the presence of methane in Uranus' atmosphere; the gas absorbs red wavelengths of light, leaving the predominant hue seen here. The tendency for the crescent to become white at the extreme edge is caused by the presence of a high-altitude haze. (Copyright Calvin J. Hamilton)

Hubble Tracks Rotation of Uranus
This view of Uranus was acquired by NASA's Hubble Space Telescope and reveals a pair of bright clouds in the planet's southern hemisphere, and a high altitude haze that forms a "cap" above the planet's south pole. This is just one view of a sequence of three that can be obtained by selecting the above gif image.

Hubble's new view was obtained on August 14, 1994, when Uranus was 2.8 billion kilometers (1.7 billion miles) from Earth. These atmospheric details were only previously seen by the Voyager 2 spacecraft, which flew by Uranus in 1986. Since then, detailed observations of Uranus's atmospheric features have not been possible because the planet is at the resolution limit of ground-based telescopes.

Uranus Ring System
This dramatic Voyager 2 picture reveals a continuous distribution of small particles throughout the Uranian ring system. The unique geometry of this picture makes the previously unseen lanes of fine dust particles visible. All the formerly known rings are visible here; however, some of the brightest features in the image are bright dust lanes not previously seen. The combination of this unique geometry and a long, 96 second exposure allowed this spectacular observation. The image was acquired through the clear filter of Voyager's wide-angle camera. The long exposure produced a noticeable, non-uniform smear as well as streaks due to trailed stars. (Copyright Calvin J. Hamilton)

Shepherd Satellites
The discovery of two shepherd satellites has advanced our understanding of the structure of the Uranian rings. The moons, Cordelia (1986U7) and Ophelia (1986U8), are seen here on either side of the bright epsilon ring; all 9 of the known Uranian rings are also visible. The epsilon ring appears surrounded by a dark halo as a result of image processing; occasional blips seen on the ring are also artifacts. Lying inward from the epsilon ring are the delta, gamma and eta rings; the beta and alpha rings; and finally the barely visible 4, 5 and 6 rings. The rings have been studied since their discovery in 1977. (Courtesy NASA/JPL)

Pseudo-image of Uranus' Ring
This pseudo-image of Uranus' rings was generated by using Voyager 2 frame FDS 26852.19. This image was taken in forward scattered light and shows dust bands not seen in any other image. A 3 pixel wide slice was taken from the most detailed part of the image, averaged to a 1 pixel wide image, then rotated 360 degrees and projected into perspective view. The real color of the rings are neutral gray and they are as dark as charcoal. (Courtesy A. Tayfun Oner)

Uranus' Rings
The 9 known rings of Uranus are visible here. The somewhat fainter, pastel lines seen between the rings are artifacts of computer enhancement. Six narrow-angle images were used to extract color information from the extremely dark and faint rings. The final image was made from three color averages and represents an enhanced, false-color view. The image shows that the brightest, or epsilon, ring at top is neutral in color, with the fainter 8 remaining rings showing color differences between them. (Courtesy NASA/JPL)

Uranian System
This montage of the Uranian system was prepared from an assemblage of images taken by the Voyager 2 spacecraft during its Uranus encounter in January 1986. This artist's view shows Ariel in the forefront, with Uranus rising behind. Traversing clockwise from Ariel are the satellites Umbriel, Oberon, Titania, Miranda, and the small moon Puck. (Copyright Calvin J. Hamilton)

The following is a summary of the rings of Uranus.

The following table summarizes the radius, mass, distance from the planet center, discoverer and the date of discovery of each of the moons of Uranus: