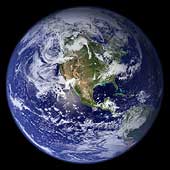 My view of our planet was a glimpse of divinity.
-Edgar Mitchell, USA

From the perspective we get on Earth, our planet appears to be big and sturdy with an endless ocean of air. From space, astronauts often get the impression that the Earth is small with a thin, fragile layer of atmosphere. For a space traveler, the distinguishing Earth features are the blue waters, brown and green land masses and white clouds set against a black background.

Many dream of traveling in space and viewing the wonders of the universe. In reality all of us are space travelers. Our spaceship is the planet Earth, traveling at the speed of 108,000 kilometers (67,000 miles) an hour.

Earth is the 3rd planet from the Sun at a distance of about 150 million kilometers (93.2 million miles). It takes 365.256 days for the Earth to travel around the Sun and 23.9345 hours for the Earth rotate a complete revolution. It has a diameter of 12,756 kilometers (7,973 miles), only a few hundred kilometers larger than that of Venus. Our atmosphere is composed of 78 percent nitrogen, 21 percent oxygen and 1 percent other constituents.

Earth is the only planet in the solar system known to harbor life. Our planet's rapid spin and molten nickel-iron core give rise to an extensive magnetic field, which, along with the atmosphere, shields us from nearly all of the harmful radiation coming from the Sun and other stars. Earth's atmosphere protects us from meteors, most of which burn up before they can strike the surface.

From our journeys into space, we have learned much about our home planet. The first American satellite, Explorer 1, discovered an intense radiation zone, now called the Van Allen radiation belts. This layer is formed from rapidly moving charged particles that are trapped by the Earth's magnetic field in a doughnut-shaped region surrounding the equator. Other findings from satellites show that our planet's magnetic field is distorted into a tear-drop shape by the solar wind. We also now know that our wispy upper atmosphere, once believed calm and uneventful, seethes with activity -- swelling by day and contracting by night. Affected by changes in solar activity, the upper atmosphere contributes to weather and climate on Earth.

Besides affecting Earth's weather, solar activity gives rise to a dramatic visual phenomenon in our atmosphere. When charged particles from the solar wind become trapped in Earth's magnetic field, they collide with air molecules above our planet's magnetic poles. These air molecules then begin to glow and are known as the auroras or the northern and southern lights.

Animations of Earth
Views of Earth

The following set of images show some of the wonders of our planet, the Earth.

Blue Marble West
This spectacular "blue marble" image is the most detailed true-color image of the entire Earth to date. Using a collection of satellite-based observations, scientists and visualizers stitched together months of observations of the land surface, oceans, sea ice, and clouds into a seamless, true-color mosaic of every square kilometer (.386 square mile) of our planet. (Courtesy NASA/MODIS/USGS) 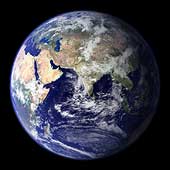 Blue Marble East
This spectacular "blue marble" image is the most detailed true-color image of the entire Earth to date. Using a collection of satellite-based observations, scientists and visualizers stitched together months of observations of the land surface, oceans, sea ice, and clouds into a seamless, true-color mosaic of every square kilometer (.386 square mile) of our planet. (Courtesy NASA/MODIS/USGS) 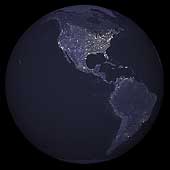 The brightest areas of the Earth are the most urbanized, but not necessarily the most populated. Cities tend to grow along coastlines and transportation networks. Even without the underlying map, the outlines of the continents are still be visible. The United States interstate highway system appears as a lattice connecting the brighter dots of city centers. (Copyright Calvin J. Hamilton) 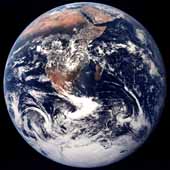 Africa
The crew of Apollo 17 took this photograph of Earth in December 1972 while the spacecraft was traveling between the Earth and the Moon. The orange-red deserts of Africa and Saudi Arabia stand in stark contrast to the deep blue of the oceans and the white of both clouds and snow-covered Antarctica. (Courtesy NASA)

Mariner 10's View of the Earth & Moon
The Earth and Moon were imaged by Mariner 10 from 2.6 million kilometers while completing the first ever Earth-Moon encounter by a spacecraft capable of returning high resolution digital color image data. These images have been combined below to illustrate the relative sizes of the two bodies. From this particular viewpoint the Earth appears to be a water planet! (Courtesy NASA/JPL/Northwestern University) 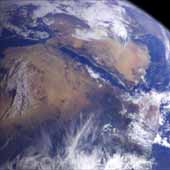 Horn of Africa, Somalia
The orange and tan colors of this high-oblique photograph of the Horn of Africa indicate an arid-to-semiarid landscape in the northern half of the east African country of Somalia. Except in the darker areas where thicker vegetation can be found, most of the vegetation in this part of Somalia is shrub brush and grasslands. The general climate of this region features hot temperatures and scarce, irregular rainfall. Two distinct drainage basins are characterized by lighter colors-the Nugaaleed Valley along the western side of the photograph and the other watershed trending toward the Hafun Peninsula, the tombolo along the east coast of Somalia. The southern extent of the Saudi Arabian Peninsula is visible north across the Gulf of Aden. (Courtesy NASA)

Southern Tip of Greenland
The southern tip of Greenland is seen in this high-oblique, almost colorless, stark photograph of the world's largest island. The blackness of space contrasts sharply with the whiteness of clouds, ice, and snow. The only true color is the blue of the Atlantic Ocean and the Labrador Sea. Cloud-free conditions existing along the southern coastal area emphasize the deeply indented fjords along the coast. A close look at the white areas reveals three different features-snow and ice on the land; cloud formations over the central region and the eastern and western sides of the island; and wispy-looking ice floes off the southeast and the southwest tip of the fjord-lined coast, which are moved by the East Greenland Current to the south-southwest, and larger ice packs developing north along the east coast. Greenland has the only surviving continental glacier in the Northern Hemisphere. This ice sheet covers seven-eighths of Greenland's surface and contains an estimated 11 percent of the world's fresh water. (Courtesy NASA)

Antarctica
This image of Antarctica was taken by Galileo several hours after it flew close to the Earth on December 8, 1990. This is the first picture of the whole Antarctic continent taken nearly at once from space. Galileo was about 200,000 kilometers (125,000 miles) from Earth when the pictures were taken.

The icy continent is surrounded by the dark blue of three oceans: the Pacific to the left, the Indian to the bottom, and a piece of the Atlantic to the upper right. Nearly the entire continent was sunlit at this time of year, just two weeks before southern summer solstice. The arc of dark spots extending from near the South Pole (close to the center) toward the lower left is the Transantarctic Mountain Range. To the left of the mountains is the vast Ross Ice Shelf and the shelf's sharp border with the dark waters of the Ross Sea. The thin blue line along the Earth's limb marks our planet's atmosphere. (Courtesy NASA/JPL)

Clementine Mission
This false-colored image was acquired during the Clementine mission. It shows airglow of the upper atmosphere as a thin blue line. The bright spot toward the bottom is an urban area. (Courtesy Naval Research Laboratory)

USA
This image is a mosaic of the United States prepared by using 16 images from the Advanced Very High Resolution Radiometer (AVHRR) sensors on the meteorological satellites NOAA-8 and NOAA-9. The images were acquired between May 24, 1984 and May 14, 1986.