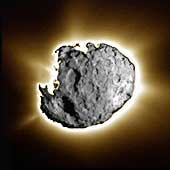 History is filled with famous comets. Halley's comet, Hale-Bopp, Hyakutake and others have dazzled observers with their brilliant nuclei and dramatic tails. Comets like Hale-Bopp have been viewed by hundreds of millions of people, and Halley's comet has had a real impact on history, as in 1066 when it was so bright that it terrified millions of Europeans and was widely credited with the Norman victory at the Battle of Hastings.

Unlike its famous cousins, comet Wild-2 (pronounced "Vilt-2") is a relatively dim, new arrival to the inner solar system. Until recently it circled the Sun in an orbit between Jupiter and Uranus, but everything changed in September 1974 when Wild-2 passed within 0.006 AU of Jupiter. That encounter with the giant planet, at only 10 times the distance which fragmented P/Shoemaker-Levy 9 in 1994, altered Wild-2's orbit so that its closest approach to the Sun now lies just inside the orbit of Mars. 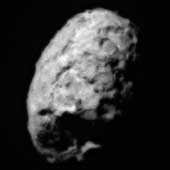 During its first passage relatively near to Earth (1.21 AU) on January 6, 1978, the comet was discovered by Paul Wild. Since then, the best apparition of Wild-2 was in March 1997 when it passed within 0.85 AU of our planet, brightening to an unimpressive 10th magnitude. That's too faint to be seen with the naked eye, but bright enough for modest amateur telescopes.

So, why was the Stardust spacecraft mission targeted to visit an obscure, hard-to-see object like Wild-2, when there are so many more notorious comets to choose from? There are two important reasons:

#1 It's fresh. Before its near miss with Jupiter in 1974 comet Wild-2 was well-preserved in the frigid outer solar system. With its new orbit, Wild-2 now comes much closer to the Sun. When a comet passes close enough to the Sun, some of its material is boiled off into interplanetary space. After about a thousand trips past the Sun, it loses most of its volatile materials and no longer generates a coma or tail. Since Wild-2 has passed the Sun only a few times, it still has most of its dust and gases - it is "pristine." By the time Stardust encounters the comet, Wild-2 will have made only five trips around the Sun. By contrast, Comet Halley has passed the Sun more than 100 times. 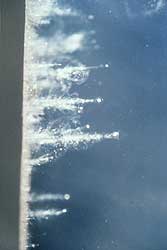 #2 It's in the right place at the right time. Wild-2 presents a unique opportunity -- it is in the right place at the right time. Scientists found a flight path that allowed the spacecraft to fly by the comet at a relatively low speed, only 13,600 mph. Because of this "low velocity" flyby, comet dust can be captured by collectors on the spacecraft, rather than blowing right through the collectors and out the back side! This comet dust can then be brought back to the Earth to be analyzed.

When Stardust caught up with comet Wild-2 on 2 January 2004, both the comet and spacecraft were beyond the orbit of Mars. Although they are far from the Sun, solar heating is still sufficient to cause particles to bubble off the surface of the comet's nucleus. The spacecraft flew within 240 kilometers (149 miles) of Wild-2. Cometary debris hit the dust catcher at up to six times the speed of a bullet fired from a high-powered rifle. To protect Stardust against the blast of expected cometary particles and rocks, the spacecraft rotated so it was flying in the shadow of its "Whipple Shields." The shields are named for American astronomer Dr. Fred L. Whipple, who, in the 1950s, came up with the idea of shielding spacecraft from high-speed collisions with the bits and pieces ejected from comets.

A unique substance called aerogel is the medium that is used to catch and preserve the high speed dust samples. Aerogel is the lightest known solid, and is considered the best substance available for capturing fragile particles from a comet without damaging them. When a high-velocity dust particle hits the aerogel, it buries itself in the material, creating a carrot-shaped track up to 200 times its own length. Since aerogel is translucent scientists can use these tracks to find the tiny particles. The track is largest at the point of entry, and the particle can be collected intact at the point of the cone. 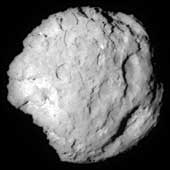 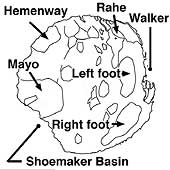 Wild 2 Close Look
This image shows the comet Wild 2, which NASA's Stardust spacecraft flew by on January 2, 2004. This image is the closest short exposure of the comet, taken at an 11.4-degree phase angle, the angle between the camera, comet and the Sun. The listed names on the diagram are those used by the Stardust team to identify features. "Basin" does not imply an impact origin. (Courtesy NASA/JPL)

If You Were There
This is an artist's concept depicting a view of comet Wild 2 as seen from NASA's Stardust spacecraft during its flyby of the comet on January 2, 2004. (Courtesy NASA/JPL)

Wild 2 Features
These images taken by NASA's Stardust spacecraft highlight the diverse features that make up the surface of comet Wild 2. Side A shows a variety of small pinnacles and mesas seen on the limb of the comet. Side B shows the location of a 2-kilometer (1.2-mile) series of aligned scarps, or cliffs, that are best seen in the stereo images. (Courtesy NASA/JPL) 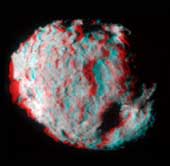 Comet Wild-2 Anaglyph
This is a red/blue stereo anaglyph of comet Wild-2. To view it properly you will need red/blue 3D glasses. (Copyright Calvin J. Hamilton)

Comet Wild-2
On January 2, 2004 NASA's Stardust spacecraft made a close flyby of comet Wild 2. Among the equipment the spacecraft carried on board was a navigation camera. This is the 34th of the 72 images taken by Stardust's navigation camera during close encounter. The exposure time was 10 milliseconds. The two frames are actually of 1 single exposure. The frame on the left depicts the comet as the human eye would see it. The frame on the right depicts the same image but "stretched" so that the faint jets emanating from Wild 2 can be plainly seen. Comet Wild 2 is about five kilometers (3.1 miles) in diameter. (Courtesy NASA/JPL)