Against all odds, NASA's Deep Space 1 not only survived its daring encounter with Comet Borrelly but also returned stunning pictures of the comet's hidden nucleus.

September 25, 2001 In a risky flyby, NASA's experimental Deep Space 1 (DS1) probe successfully navigated past the heart of Comet Borrelly last Saturday, September 22nd. Whizzing just 2,200 kilometers from Borrelly's rocky, icy core, DS1 captured the best-resolution pictures to date of any comet's nucleus. Onboard instruments also measured the composition of gases swirling around the nucleus and revealed new information about how those gases interact with the solar wind.

Before the encounter, mission planners weren't certain that DS1 would survive its rendezvous with Borrelly. After all, the craft was designed for a technology-testing mission -- long ago completed with great success -- and not for a comet flyby. Deep Space 1 sped through the comet's turbulent coma (a hazy cloud of gas and dust surrounding the core) with no shielding from gaseous jets or potentially damaging bits of flying comet dust.

Nevertheless, the flyby was a big success.

"Deep Space 1 plunged into the heart of Comet Borrelly and has lived to tell every detail of its spine-tingling adventure!" said Dr. Marc Rayman, the project manager of Deep Space 1 at the Jet Propulsion Laboratory (JPL), Pasadena, Calif. "The images are even better than the impressive images of comet Halley taken by Europe's Giotto spacecraft in 1986." Rayman added, "After years of nursing this aged and wounded bird -- a spacecraft not structured to explore comets, a probe that exceeded its objectives more than two years ago -- to see it perform its remarkably complex and risky assignment so well was nothing short of incredible."

"It's mind-boggling and stupendous," agreed Dr. Laurence Soderblom, the leader of Deep Space 1's imaging team, and a geologist with the U.S. Geological Survey, Flagstaff, Ariz. "These pictures have told us that comet nuclei are far more complex than we ever imagined. They have rugged terrain, smooth rolling plains, deep fractures and very, very dark material."

Scientists also realized that Borrelly was different than they expected as Deep Space 1 flew through the dusty gaseous coma. They had expected that the solar wind (a stream of charged particles flowing from the Sun) would flow symmetrically around the coma with the nucleus in the center.

The solar wind did indeed flow symmetrically around the cloud, but the nucleus was off to one side shooting out a great jet of material forming the cloud that makes the comet visible from Earth. "The formation of the coma is not the simple process we once thought it was," said Dr. David Young of the University of Michigan, Ann Arbor, leader of the team that made the measurements. "Most of the charged particles are formed to one side, which is not what we expected."

More surprises may await scientists in the data beamed back from DS1. It's only been a few days since the speedy encounter, note researchers -- not enough time to completely explore the data set. The most extraordinary discoveries may be yet to come. 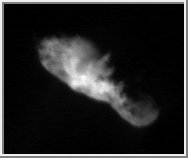 Comet Borrelly's Varied Landscape
In this Deep Space 1 image of comet Borrelly, sunlight illuminates the bowling-pin shaped nucleus from directly below. At this distance, many features are become vivid on the surface of the nucleus, including a jagged line between day and night on the comet, rugged terrain on both ends with dark patches, and smooth, brighter terrain near the center. The smallest discernable features are about 110 meters (120 yards) across. [more information] 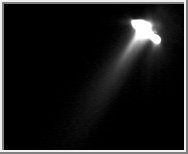 Jets on comet Borrelly
This very long exposure was taken by NASA's Deep Space 1 to show detailed structures in the faint parts of comet Borrelly's inner coma. As a result, the nucleus has been greatly over-exposed and its shape appears distorted. The main jet extends to the lower right about 30 degrees off the Sun-line. Faint structures in the coma stretch from the nucleus in all directions. The surface of Borrelly is composed of a mixture of dust and water ice, and as the comet approaches the Sun the ice sublimes. Dust carried outward by expanding gas makes the jets visible. [more information]

Early close image of comet Borrelly
The solid nucleus of comet Borrelly is barely resolved in this image, enhanced to reveal the highly collimated dust extending towards the bottom left corner of the picture. The jet is attributed to dust carried outward by gas expanding outwards into a cone about 20 degrees across. The surface of Borrelly is composed of a mixture of dust and water ice, and as the comet approaches the Sun the water ice sublimes. The gases produced inside the comet by the Sun's heating race away from the surface into the vacuum of space, carrying the dust away with them. The jet was also seen in images acquired around 9 hours earlier. This suggests that the emission is coming from close to the rotation axis at the comet's constantly illuminated pole. The Sun is at the bottom of the image. [more information]

Comet Slows Solar Wind
Over 1300 energy spectra taken on September 22, 2001 from the ion and electron instruments on NASA's Deep Space 1 span a region of 1,400,000 kilometers (870,000 miles) centered on the closest approach to the nucleus of comet Borrelly. A very strong interaction occurs between the solar wind (horizontal red bands to left and right in figure) and the comet's surrounding cloud of dust and gas, the coma. Near Deep Space 1's closest approach to the nucleus, the solar wind picked up charged water molecules from the coma (upper green band near the center), slowing the wind sharply and creating the V-shaped energy structure at the center. [more information]

Comet Nucleus Found to the Side
Deep Space 1 flew by comet Borrelly on September 22, 2001 and took these measurements with its plasma instruments between 90,000 kilometers (56,000 miles) and 2,000 kilometers (1,200 miles) away. These data show that the flow of ions around the comet's rocky, icy nucleus (the center of the deep V-shaped feature) is not centered on the comet's nucleus as scientists expected before the Borrelly flyby. Ions in the turbulent flow are heated to about 1 million Kelvin (2 million degrees Fahrenheit) causing the bands of ions to appear broad and jagged compared to the solar wind. [more information]