Home | Site Map | What's New | Image Index | Copyright | Posters | ScienceViews | Mythology |
Home Solar System Comets Comet Tempel 1
Discovery
Comet 9P/Tempel 1 was discovered on April 3, 1867 by Ernst Wilhelm Leberecht Tempel of Marseilles France while visually searching for comets. The comet was then 9th magnitude and described by Tempel as having an apparent diameter of 4 to 5 arcmin across. Later calculations revealed that the comet had been situated 0.71 AU from the Earth and 1.64 AU from the sun at that time.

Historical Highlights
The comet was very well placed for its 1867 discovery thanks to its closest approach to Earth (0.568 AU) and its perihelion (1.562 AU), which occurred on May 15 and May 24, respectively. Over the next five months after its initial detection, subsequent observations were frequently made. The comet was last detected on August 27, 1867 by Julius Schmidt, at which point the comet had become too faint for position measurements. At that time the comet was 1.30 AU from Earth and 1.81 AU from the sun.

The comet was recovered on April 4, 1873 by E.J.M. Stephan of Marseilles, France. The comet remained under observation until July 1st of that year.

Predictions were made for an 1879 return, with the most ambitious being that of Raoul Gautier who computed definitive orbits from the two previous appearances before making his predictions for the upcoming return. Gautier's predictions enabled Tempel to recover the comet on April 25, 1879. The comet was observed until its last detection on July 8.

In 1881, comet Tempel 1 passed 0.55 AU from Jupiter. Due to gravitational interactions, the comet's orbital period was increased to 6.5 years and the perihelion distance was increased from 1.8 AU to 2.1 AU, making the comet an even fainter object. Subsequently, the comet was lost and it was not observed at its next expected return. Photographic attempts during 1898 and 1905 failed to recover the comet.

During 1963, B.G. Marsden conducted an investigation as to why comet Tempel 1 became lost. He found that further close approaches to Jupiter in 1941 (0.41 AU) and 1953 (0.77 AU) had decreased both the perihelion distance and the orbital period to values smaller than when the comet was initially discovered. These approaches moved Tempel 1 into its present libration around the 1:2 resonance with Jupiter. Subsequently, Marsden published predictions for the 1967 and 1972 returns in his paper On the Orbits of Some Long Lost Comets. (Courtesy of NASA Astrophysics Data System)

Despite an unfavorable 1967 return, Elizabeth Roemer of the Catalina Observatory took several photographs during 1967. Her initial inspections of these photographs revealed nothing. However, in late 1968 she re-examined the photographic plates and found that a single exposure taken on June 8, 1967 held the image of an 18th magnitude diffuse object very close to where Marsden had predicted the comet to be. Unfortunatly, the single image did not provide definitive proof of the comet's recovery.

During 1972, Marsden's predictions allowed Roemer and L.M. Vaughn to recover the comet on January 11 from Steward Observatory. The comet became widely observed and reached a maximum brightness of magnitude 11 during May of that year. The comet was last seen on July 10. This apparition proved that the single image taken by Roemer in 1967 was indeed comet 9P/Tempel 1. Since that time the comet has been seen at every apparition.

Tempel 1 Today
Currently, Tempel 1 has an orbital period of 5.5 years and a perihelion distance of roughly 1.5 AUs. With an orbital eccentricity of 0.5, Tempel 1's orbit lies between the orbits of Mars and Jupiter. These values varied in the past and will change in the future because of close approaches with the planet Jupiter. While we can calculate the orbital parameters, determining the size and shape of the nucleus has been difficult because we can't see the nucleus. However, based on a variety of observations, we believe the nucleus is very roughly 6km in diameter and that it is somewhat more elongated rather than a sphere. In fact, we've only seen the nuclei for three comets -- Halley, Borrelly, and Wild 2. In July 2005, we hope to add to this small collection with a very detailed view of the nucleus of Tempel 1!

Click Here to View all of the Temple 1 Pictures

Analyzing a Cometary 'Sneeze'
This display shows highly processed images of the outburst of comet Tempel 1 between June 22 and 23, 2005. The pictures were taken by Deep Impact's medium-resolution camera. An average image of the comet has been subtracted from each picture to provide an enhanced view of the outburst. The intensity has also been stretched to show the faintest parts. This processing enables measurement of the outflow speed and the details of the dissipation of the outburst. The left image was taken when the comet was very close to its normal, non-bursting state, so almost nothing is visible. (Courtesy NASA/JPL-Caltech/UMD) 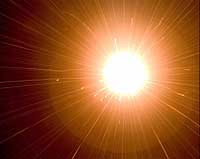 It Happens in a Flash
This image shows a flash produced in a laboratory by a high-velocity bead slamming into dust. Though the flash itself can't be resolved, its brilliant effects can be seen in this three-second time exposure. Scientists say that the collision between Deep Impact's impactor and comet Tempel 1 may produce a similar flash.

This flash occurred when a quarter-inch sphere smashed into powdered dust at a speed of 6.4 kilometers per second (4 miles per second). Even though the actual flash lasted less than 50 millionths of a second, the camera recorded the hot debris in the impact crater (center) and the streaking ejecta. This experiment was performed at NASA's Ames Research Center, Moffett Field, Calif. (Courtesy NASA/Ames)

Cometary 'Sneeze'
This movie of comet Tempel 1 is made up of raw images taken by the medium resolution imager on the Deep Impact spacecraft. The images were acquired between June 22 and June 24, 2005. A brightening by a factor of about 5 and a rapid decay to baseline brightness were observed on June 22. As the comet moves through space, background stars pass in and out of the field of view. Cosmic rays hitting the spacecraft's detector give an appearance of flickering. This is an artifact of space cameras that can be removed. (Courtesy NASA/JPL-Caltech/UMD) 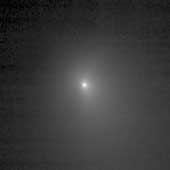 Capturing the Coma
This image shows comet Tempel 1, as seen by the Deep Impact spacecraft on June 21, 2005. It was taken using the clear filter of the spacecraft's medium resolution imager camera. The spacecraft was 11,564,081.7 kilometers (7,185,920 miles) away from the comet. Twelve images were combined together, and a logarithmic stretch was applied to enhance the coma of the comet. (Courtesy NASA/JPL-Caltech/UMD) 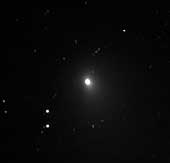 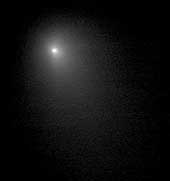 Deep Impact View of Tempel 1
This image is a compilation of 9 images that were taken on June 15, 2005 through the Clear filter of the Medium Resolution (MRI) camera. The spacecraft is 16,896,900 km (10,499,250 miles) away from the comet. This image is displayed on a logarithmic scale that enhances the comet's coma. (Courtesy NASA/JPL-Caltech/UMD) 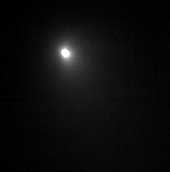 Deep Impact View of Tempel 1
This image is a compilation of 9 images that were taken on June 15, 2005 through the Clear filter of the Medium Resolution (MRI) camera. The spacecraft is 16,896,900 km (10,499,250 miles) away from the comet. This image is displayed on a linear scale that enhances the comet's coma. (Courtesy NASA/JPL-Caltech/UMD)