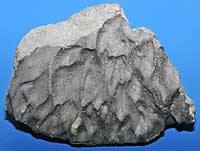 The term meteor comes from the Greek meteoron, meaning phenomenon in the sky. It is used to describe the streak of light produced as matter in the solar system falls into Earth's atmosphere creating temporary incandescence resulting from atmospheric friction. This typically occurs at heights of 80 to 110 kilometers (50 to 68 miles) above Earth's surface. The term is also used loosely with the word meteroid referring to the particle itself without relation to the phenomena it produces when entering the Earth's atmosphere. A meteoroid is matter revolving around the sun or any object in interplanetary space that is too small to be called an asteroid or a comet. Even smaller particles are called micrometeoroids or cosmic dust grains, which includes any interstellar material that should happen to enter our solar system. A meteorite is a meteoroid that reaches the surface of the Earth without being completely vaporized.

One of the primary goals of studying meteorites is to determine the history and origin of their parent bodies. Several achondrites sampled from Antarctica since 1981 have conclusively been shown to have originated from the moon based on compositional matches of lunar rocks obtained by the Apollo missions of 1969-1972. Sources of other specific metorites remain unproven, although another set of eight achondrites are suspected to have come from Mars. These meteorites contain atmospheric gases trapped in shock melted minerals which match the composition of the Martian atmosphere as measured by the Viking landers in 1976. All other groups are presumed to have originated on asteroids or comets; the majority of meteorites are believed to be fragments of asteroids.

Meteorites have proven difficult to classify, but the three broadest groupings are stony, stony iron, and iron. The most common meteorites are chondrites, which are stony meteorites. Radiometric dating of chondrites has placed them at the age of 4.55 billion years, which is the approximate age of the solar system. They are considered pristine samples of early solar system matter, although in many cases their properties have been modified by thermal metamorphism or icy alteration. Some meteoriticists have suggested that the different properties found in various chondrites suggest the location in which they were formed. Enstatite chondrites contain the most refractory elements and are believed to have formed in the inner solar system. Ordinary chondrites, being the most common type containing both volatile and oxidized elements, are thought to have formed in the inner asteroid belt. Carbonaceous chondrites, which have the highest proportions of volatile elements and are the most oxidized, are thought to have originated in even greater solar distances. Each of these classes can be further subdivided into smaller groups with distinct properties.

Other meteorite types which have been geologically processed are achondrites, irons and pallasites. Achondrites are also stony meteorites, but they are considered differentiated or reprocessed matter. They are formed by melting and recrystallization on or within meteorite parent bodies; as a result, achondrites have distinct textures and mineralogies indicative of igneous processes. Pallasites are stony iron meteorites composed of olivine enclosed in metal. Iron meteorites are classified into thirteen major groups and consist primarily of iron-nickel alloys with minor amounts of carbon, sulfur, and phosphorus. These meteorites formed when molten metal segregated from less dense silicate material and cooled, showing another type of melting behavior within meteorite parent bodies. Thus, meteoritescontain evidence of changes that occurred on the parent bodies from which they were removed or broken off, presumably by impacts, to be placed in the first of many revolutions.

The motion of meteoroids can be severely perturbed by the gravitational fields of major planets. Jupiter's gravitational influence is capable of reshaping an asteroid's orbit from the main belt so that it dives into the inner solar system and crosses the orbit of Earth. This is apparently the case of the Apollo and Vesta asteroid fragments.

Particles found in highly correlated orbits are called a stream components and those found in random orbits are called sporadic components. It is thought that most meteor streams are formed by the decay of a comet nucleus and consequently are spread around the original orbit of the comet. When Earth's orbit intersects a meteor stream, the meteor rate is increased and a meteor shower results. A meteor shower typically will be active for several days. A particularly intense meteor shower is called a meteor storm. Sporadic meteors are believed to have had a gradual loss of orbital coherence with a meteor shower due to collisions and radiative effects, further enhanced by gravitational influences. There is still some debate concerning sporadic meteors and their relationship with showers.

Martian Meteorite
This meteorite, a basalt lava rock nearly indistinguishable from many Earth rocks, provided the first strong proof that meteorites could come from Mars. Originally weighing nearly 8 kilograms (17.6 pounds), it was collected in 1979 in the Elephant Moraine area of Antarctica. The side of the cube at the lower left in this image measures 1 centimeter (0.4 inches).

This picture shows a sawn face of this fine-grained gray rock. (The vertical stripes are saw marks.) The black patches in the rock are melted rock, or glass, formed when a large meteorite hit Mars near the rock. The meteorite impact probably threw this rock, dubbed "EETA79001," off Mars and toward Antarctica on Earth. The black glass contains traces of martian atmosphere gases. This meteorite is 180 million years old.

The Mars Exploration Rover Opportunity has discovered that a rock dubbed "Bounce" at Meridiani Planum has a very similar mineral composition to this meteorite and likely shares common origins. Bounce itself is thought to have originated outside the area surrounding Opportunity's landing site; an impact or collision likely threw the rock away from its primary home.(Courtesy NASA/JSC/JPL) 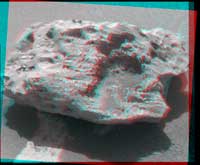 'Block Island' Meteorite on Mars
Composition measurements by NASA's Mars Exploration Rover Opportunity confirm that this rock on the Martian surface is an iron-nickel meteorite.

This image combines exposures from the left eye and right eye of the rover's panoramic camera to provide a three-dimensional view when seen through red-green glasses with the red lens on the left. The camera took the component images during the 1,961st Martian day, or sol, of Opportunity's mission on Mars (July 31), after approaching close enough to touch the rock with tools on the rover's robotic arm.

Researchers have informally named the rock "Block Island." With a width of about two-thirds of a meter (2 feet), it is the largest meteorite yet found on Mars. Opportunity found a smaller iron-nickel meteorite, called "Heat Shield Rock" in late 2004. (Courtesy NASA/JPL-Caltech/Cornell University) 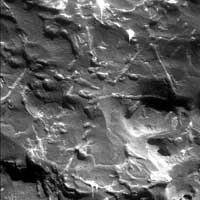 Magnified Look at a Meteorite on Mars
NASA's Mars Exploration Rover Opportunity used its microscopic imager to get this view of the surface of a rock called "Block Island" during the 1,963rd Martian day, or sol, of the rover's mission on Mars (Aug. 1, 2009). The triangular pattern of small ridges seen at the upper right in this image and elsewhere on the rock is characteristic of iron-nickel meteorites found on Earth, especially after they have been cut, polished and etched. Block Island has been identified as an iron-nickel meteorite based on this surface texture and analysis of its composition by Opportunity's alpha particle X-ray spectrometer. At about 60 centimeters (2 feet) across, it is the largest meteorite yet found on Mars.

This image shows a patch 32 millimeters by 32 millimeters (1.3 inches by 1.3 inches) on the surface of Block Island while the target was fully illuminated by the sun. This target on the rock is informally named "New Shoreham." The vertical white streaks, especially near the top and bottom of the image, are artifacts caused by saturation of the camera's CCD (charge-coupled device, or image recorder) where sunlight glinted off metallic facets.

The triangular pattern in the texture of iron-nickel meteorites, called the Widmanstatten pattern, formed more than 4.5 billion years ago as the metal cooled. One iron-nickel mineral, kamacite, formed thin layers along the surface of crystals of another, taenite, which contains less nickel. The two minerals differ in their resistance to either etching by acid or erosion by wind-blown sand, so those processes can make the pattern visible. (Courtesy NASA/JPL-Caltech/Cornell University/USGS) 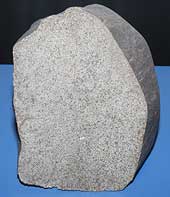 Chondrite Meteorite
This meteorite fell in 1970 in Cherokee County, Oklahoma. It is subclassed as H Group or an olivine-bronzite chondrite. Meteorites are bits of rock that are captured by a planet's gravity and pulled to the surface. This meteorite is of a type named chondrite and is thought to have formed at the same time as the planets in the solar nebula, about 4.55 billion years ago. (Copyright Calvin J. Hamilton) 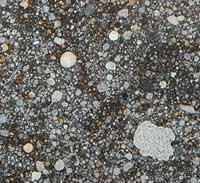 Chondrite Meteorite Slice
This is a section from a stone chondrite meteorite that fell in 1852 in Harghita, Romania. (Copyright Calvin J. Hamilton)

Chondrite Meteorite Showing Regmaglypts
This meteorite fell in 1924. Notice the depreessions on this sample. These are called regmaglypts and are most likely paralled to the air flow direction during the flight of the meteorite. (Copyright Calvin J. Hamilton)

Achondrite Meteorite
Discovered at Norton County, Kansas, this type of meteorite is known as an achondrite. It has a basaltic composition and was probably formed when an asteroid melted about 4.5 billion years ago. The asteroid broke up some time later and this small piece of the asteroid was captured by Earth's gravity and fell to the ground. (Copyright Calvin J. Hamilton) 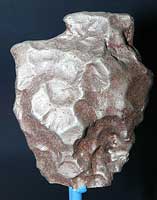 Iron Meteorite
This iron meteorite was found at Victoria Land, Antarctica. This type of meteorite gets its name because it is mostly made of the elements iron and nickel. This sample is probably a small piece from the core of a large asteroid that broke apart. (Copyright Calvin J. Hamilton) 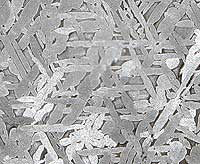 Polished Iron Meteorite
This Iron (III E) Meteorite contains a distinctive crystal pattern known as the Widmanstaten structure. It was fashioned over thousands or millions of years in a low gravity environment at an extremely low rate of cooling producing large crystals of nickel-rich and nickel-poor metallic bands. Such a structure is impossible to forge making the identity of this and similar iron meteorites absolute. Laboratories are only able to imitate it on the microscopic scale. This sample has been cut, polished and etched with acid to enhance the view of the Widmanstaten structure. (Copyright Calvin J. Hamilton) 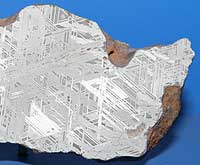 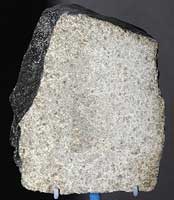 Martian Meteorite
This meteorite fell in 1911 in Alexandria, Egypt. It is believed to have formed on Mars based on its dense pyroxene (greenish-gray) and olivine (brown) crystals which are a signature of martian molten rock. It also contains water-bearing minerals. (Copyright Calvin J. Hamilton) 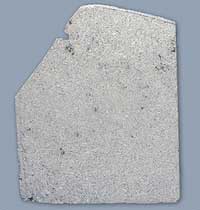 Martian Meteorite Slice
This meteorite fell in 1962 in Katsina Province, Nigeria. It is believed that it is a fragment of a Martian lava flow. It found its way to Earth when a giant impact on Mars catapulted rock fragments into space. A close look at the black glass veins show they are impact melt that contain Martian gases. (Copyright Calvin J. Hamilton)

Peekskill Meteorite
This meteorite is famous for the fact that when it fell on October 9, 1992 it destroyed the trunk of a car in Westchester County, New York. (Copyright Calvin J. Hamilton)

Vesta Meteorite
This meteorite is assumed to be a sample of the crust of the asteroid Vesta, which is only the third solar system object beyond Earth where scientists have a laboratory sample (the other extraterrestrial samples are from Mars and the Moon). The meteorite is unique because it is made almost entirely of the mineral pyroxene, common in lava flows. The meteorite's mineral grain structure also indicates it was once molten, and its oxygen isotopes are unlike oxygen isotopes found for all other rocks of the Earth and Moon. The meteorite's chemical identity points to the asteroid Vesta because it has the same unique spectral signature of the mineral pyroxene.

Most of the identified meteorites from Vesta are in the care of the Western Australian Museum. This 1.4 pound (631 gm) specimen comes from the New England Meteoritical Services. It is a complete specimen measuring 9.6 x 8.1 x 8.7 centimeters (3.7 x 3.1 x 3.4 inches), showing the fusion crust, evidence of the last stage in its journey to Earth. (Photo Credit: R. Kempton, New England Meteoritical Services)