Introduction
Fragments of comet P/Shoemaker-Levy 9 collided with Jupiter on July 16-22, 1994. The results were spectacular. At least 20 large fragments impacted the planet at 60 kilometers (37 miles) per second, causing plumes thousands of kilometers high. They left hot bubbles of gas in the atmosphere and great dark scars which lasted for months after the collision. The largest fragments were estimated at 2 kilometers (1.2 miles) in diameter.

The fragments impacted Jupiter at approximately 45° south latitude and 6.5° longitude from the limb, and 15° from the dawn terminator just out of view of the Earth. Eleven minutes after impact, the point in the atmosphere where the impact occurred would rotate across the limb and 14 minutes later would cross the dawn terminator. The fragments were moving at an angle of 83° from the Jovian north to south axis and struck the cloud tops at about 45°. The following table lists the impact times as seen from the Earth, calculated by Don Yeomans and Paul Chodes.

Galileo Image of Impact W
These four images of Jupiter and the luminous night-side impact of fragment W of Comet Shoemaker-Levy 9 were taken by the Galileo spacecraft on July 22, 1994. The spacecraft was 238 million kilometers (148 million miles) from Jupiter at the time, and 621 million kilometers (386 million miles) from Earth. The spacecraft was about 40 degrees from Earth's line of sight to Jupiter, permitting this direct view. The first image, taken at an equivalent time to 8:06:10 Greenwich Mean Time (1:06 a.m. Pacific Daylight Time), shows no impact. In the next three images, a point of light appears, brightens so much as to saturate its picture element, and then fades again, seven seconds after the first picture. The location is approximately 44 degrees south as predicted; dark spots to the right are from previous impacts. Jupiter is approximately 60 picture elements in diameter. (Courtesy NASA)

Impact of H-fragment observed at La Silla
This image was obtained with the TIMMI instrument at the European Southern Observatory's 3.6-meter telescope on July 18, 1994, 20:11 UT. It shows the rising plume above the impact site of fragment H of comet Shoemaker-Levy 9. The image was made in the 9.1 - 10.4 micron band in the far-infrared region. The surface brightness of this plume was about 50 times that of the Jupiter disk. The temperature was measured as more than 300 K. (Courtesy European Southern Observatory)

HST UV Image of Impacts H, Q1, R, D, G, L, B, N & Q2
This ultraviolet image shows Jupiter's atmosphere at a wavelength of 2550 Angstroms after many impacts by fragments of comet Shoemaker-Levy 9. The most recent impactor is fragment R which is below the center of Jupiter (third dark spot from the right). This photo was taken by the Hubble Space Telescope at 3:55 EDT on July 21, about 2.5 hours after R's impact. A large dark patch from the impact of fragment H is visible rising on the morning (left) side. Proceeding to the right, other dark spots were caused by impacts of fragments Q1, R, D and G (now one large spot), and L, with L covering the largest area of any seen thus far. Small dark spots from B, N, and Q2 are visible with careful inspection of the image. The spots are very dark in the ultraviolet because a large quantity of dust is being deposited high in Jupiter's stratosphere, and the dust absorbs sunlight. (Courtesy Hubble Space Telescope Comet Team)

HST Image of Impacts E/F, H, N, Q1, Q2, R and D/G
Image of Jupiter with the Hubble Space Telescope Planetary Camera. Eight impact sites are visible. From left to right are the E/F complex (barely visible on the edge of the planet), the star-shaped H site, the impact sites for tiny N, Q1, small Q2, and R, and on the far right limb the D/G complex. The D/G complex also shows extended haze at the edge of the planet. The features are rapidly evolving on time scales of days. The smallest features in this image are less than 200 kilometers (124 miles) across. (Courtesy Hubble Space Telescope Comet Team)

HST Image of Impacts D and G
This image of Jupiter shows the impact sites of fragments "D" and "G" from Comet Shoemaker-Levy 9. The large feature was created by the impact of fragment "G" on July 18, 1994 at 3:28 a.m. EDT. It entered Jupiter's atmosphere from the south at a 45-degree angle, and the resulting ejecta appears to have been thrown back along that direction. The smaller feature to the left of the fragment "G" impact site was created on July 17, 1994, at 7:45 a.m. EDT by the impact of fragment "D". The "G" impact has concentric rings around it, with a central dark spot 2,500 kilometers (1,550 miles) in diameter. This dark spot is surrounded by a thin dark ring 7,500 kilometers (4,661 miles) in diameter. The dark thick outermost ring's inner edge has a diameter of 12,000 kilometers (7,460 miles) - about the size of the Earth. (Courtesy Hubble Space Telescope Comet Team)

HST Views of Comet Fragment G Impact Zone
This image shows two views of the impact zone on Jupiter of fragment G of Comet Shoemaker-Levy 9. The image on the left was made in green light. The image on the right is the same field taken through a methane filter. These images were obtained by the Hubble Space Telescope in the early morning of July 18, 1994. The impact site is visible as a complex pattern of circles seen in the lower left of the partial planet image. The small dark feature to the left of the pattern of circles is the impact site of fragment D. The dark, sharp ring at the site of the fragment G impact is 80% of the size of the Earth. (Courtesy Dr. Heidi Hammel, Massachusetts Institute of Technology/NASA HST)

HST A, C and E Impact Sites
This Hubble image of Jupiter was obtained with a filter at 336 nm (near-ultraviolet light) at 18:42 UT on 17 July 1994. Three impact sites (from left to right: C, A, and E) are visible as dark spots across the lower portion of the image. All other features in this picture are characteristic of Jupiter's normal state. The feature created by the impact of A is 23 hours old in this image. The C and E features are 12 and 5 hours old, respectively. Io is seen on the left as a dark spot in the northern hemisphere, and the Great Red Spot is visible on the right limb. (Courtesy Hubble Space Telescope Jupiter Imaging Team) 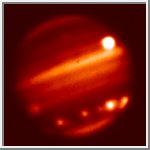 IRTF Infrared Image of Q & R Impacts
This is a 2.07 micron image of Jupiter taken on the NASA Infrared Telescope Facility, Mauna Kea, Hawaii, at 08:54 on July 21, 1994. Io, the closest of the jovian moons, can be seen crossing the planet in the northwest of the image (top right). The Great Red Spot is visible in the south east of the planet. At the collision latitudes, the impact due to Fragment Q is just setting on the west. Just to the east of it, the R Fragment impact site shows up very brightly. Another four impact sites form a chain of spots behind R. (Courtesy NASA IRTF Comet Science Team)