"What a way to kick off America's Independence Day," said Deep Impact Project Manager Rick Grammier of NASA's Jet Propulsion Laboratory, Pasadena, Calif. "The challenges of this mission and teamwork that went into making it a success, should make all of us very proud."

"This mission is truly a smashing success," said Andy Dantzler, director of NASA's Solar System Division. "Tomorrow and in the days ahead we will know a lot more about the origins of our solar system."

Official word of the impact came 5 minutes after impact. At 1:57 a.m. EDT, an image from the spacecraft's medium resolution camera downlinked to the computer screens of the mission's science team showed the tell-tale signs of a high-speed impact.

"The image clearly shows a spectacular impact," said Deep Impact principal investigator Dr. Michael A'Hearn of the University of Maryland, College Park. "With this much data we have a long night ahead of us, but that is what we were hoping for. There is so much here it is difficult to know where to begin."

The celestial collision and ensuing data collection by the nearby Deep Impact mothership was the climax of a very active 24 hour period for the mission which began with impactor release at 2:07 a.m. EDT on July 3. Deep space maneuvers by the flyby, final checkout of both spacecraft and comet imaging took up most of the next 22 hours. Then, the impactor got down to its last two hours of life.

"The impactor kicked into its autonomous navigation mode right on time," said Deep Impact navigator Shyam Bhaskaran, of JPL. "Our preliminary analysis indicates the three impactor targeting maneuvers occurred on time at 90, 35 and 12.5 minutes before impact."

At the moment the impactor was vaporizing itself in its 10 kilometers per second (6.3 miles per second) collision with comet Tempel 1, the Deep Impact flyby spacecraft was monitoring events from nearby. For the following14 minutes the flyby collected and downlinked data as the comet loomed ever closer. Then, as expected at 2:05 a.m. EDT, the flyby stopped collecting data and entered a defensive posture called shield mode where its dust shields protect the spacecraft's vital components during its closest passage through the comet's inner coma. Shield mode ended at 2:32 a.m. EDT when mission control re-established the link with the flyby spacecraft.

"The flyby surviving closest approach and shield mode has put the cap on an outstanding day," said Grammier. "Soon, we will begin the process of downlinking all the encounter information in one batch and hand it to the science team."

The goal of the Deep Impact mission is to provide a glimpse beneath the surface of a comet, where material from the solar system's formation remains relatively unchanged. Mission scientists expect the project will answer basic questions about the formation of the solar system, by offering a better look at the nature and composition of the frozen celestial travelers known as comets.

Click Here to View all of the Temple 1 Pictures

Impactor Eyes Comet Target
Comet Tempel 1 as seen by the Deep Impact impactor targeting sensor at 7:44 Universal Time, July 3, 2005. This image was taken 1 hour and 37 minutes after the impactor was released from the flyby craft and is displayed on a logarithmic scale. The impactor was 808,478 kilometers (502,388 miles) away from the comet when the image was taken. (Courtesy NASA/JPL-Caltech/UMD)

Journey to a Comet (Animation)
This movie shows Deep Impact's approach to comet Tempel 1. It is made up of images taken by the spacecraft's medium-resolution camera from May 1 to July 2, 3:50 Universal Time. The spacecraft detected three outbursts during this time period, on June 14, June 22 and July 2. The outbursts appear as flickers or bursts of light. The movie ends during the middle of the final outburst. (Courtesy NASA/JPL-Caltech/UMD) 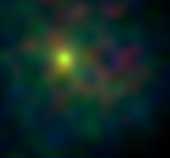 X-ray Eyes on Tempel
This false-color image shows comet Tempel 1 as seen by Chandra X-ray Observatory on June 30, 2005, Universal Time. The comet was bright and condensed. The X-rays observed from comets are caused by an interaction between highly charged oxygen in the solar wind and neutral gases from the comet.

Chandra will observe the comet for 18 hours during and after the time when NASA's Deep Impact impactor probe collides with Tempel 1 at 10:52 p.m. Pacific time, July 3 (1:52 a.m. Eastern time, July 4). The material ejected from the crater could cause the interaction region, and thus the X-ray emission, to move toward the Sun. (Courtesy NASA/CXC) 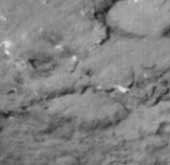 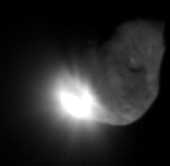 Hubble Witnesses Comet Crash
These pictures of comet Tempel 1 were taken by NASA's Hubble Space Telescope. They show the comet before and after it ran over NASA's Deep Impact probe. (Courtesy NASA/STScI) 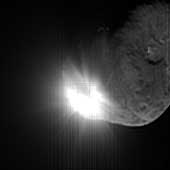 Gone in a Flash
This image shows the initial ejecta that resulted when NASA's Deep Impact probe collided with comet Tempel 1 at 10:52 p.m. Pacific time, July 3 (1:52 a.m. Eastern time, July 4). It was taken by the spacecraft's high-resolution camera 13 seconds after impact. The image has been digitally processed to better show the comet's nucleus. (Courtesy NASA/JPL-Caltech/UMD) 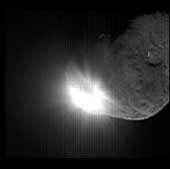 We're Going In! (Animation)
This movie shows Deep Impact's impactor probe approaching comet Tempel 1. It is made up of images taken by the probe's impactor targeting sensor. The probe collided with the comet at at10:52 p.m. Pacific time, July 3 (1:52 a.m. Eastern time, July 4). (Courtesy NASA/JPL-Caltech/UMD)