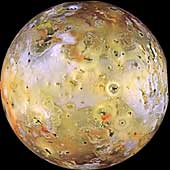 Nothing endures but change.
- Heraclitus

Jupiter's moon Io [EYE-oh or EE-oh] is one of the most exotic places in the solar system. It is the most volcanic body known, with lava flows, lava lakes, and giant calderas covering its sulfurous landscape. It has billowing volcanic geysers spewing sulfurous plumes to over 500 kilometers high. Its mountains are much taller than those on Earth, reaching heights of 16 kilometers (52,000 feet).

Io orbits closer to Jupiter's cloud tops than the moon does to Earth. This places Io within an intense radiation belt that bathes the satellite with energetic electrons, protons, and heavier ions. As the Jovian magnetosphere rotates, it sweeps past Io and strips away about 1,000 kilograms (1 ton) per second of volcanic gases and other materials. This produces a neutral cloud of atoms orbiting with Io as well as a huge, doughnut shaped torus of ions that glow in the ultraviolet. The torus's heavy ions migrate outward, and their pressure inflates the Jovian magnetosphere to more than twice its expected size. Some of the more energetic sulfur and oxygen ions fall along the magnetic field into the planet's atmosphere, resulting in auroras. Io acts as an electrical generator as it moves through Jupiter's magnetic field, developing 400,000 volts across its diameter and generating an electric current of 3 million amperes that flows along the magnetic field to the planet's ionosphere.

On January 7, 1610 Galileo Galilei observed three pinpoints of light strung out in a line next to Jupiter. The next evening, these stars seemed to have moved the wrong way, which caught his attention. Galileo continued to observe the stars and Jupiter for the next week. On January 11, a fourth star (Ganymede) appeared. After a week, Galileo observed that the four stars never left the vicinity of Jupiter, appeared to be carried along with the planet, and changed their position with respect to each other and Jupiter. Finally, Galileo determined that what he was observing were not stars, but planetary bodies that were in orbit around Jupiter. This discovery provided evidence in support of the still heretical Copernican solar system and showed that everything did not revolve around the Earth.

In 1676 a Danish astronomer Ole Romer was able to make the first accurate measurement of the speed of light by using eclipse timings of the Galilean satellites with Jupiter's shadow. Another discovery was made by Pierre-Simon de Laplace during the late 1700s when he deduced that the orbital periods of Io, Europa, and Ganymede are nearly in a perfect 1:2:4 ratio. In 1920 this knowledge paved the way for the first estimate of the satellites' masses within an accuracy of 20%. Finally in 1979, the Voyager spacecraft flew past the Jovian system, took high-resolution pictures of the moons, and conducted experiments that provided the first accurate measurements of the moon's dimensions and mass. These in turn were used to calculate the mean density of Io (3.5 g/cm3), Europa (3.0 g/cm3), Ganymede (1.9 g/cm3), and Callisto (1.8 g/cm3).

Based on density, surface composition analysis, and gravity data, Io appears to be a rocky silicate rich body that has a dense iron, iron sulfide core that extends halfway to the surface with a partially melted silicate rich mantle, and a thin rocky crust. The lower density of Ganymede and Callisto suggest that they are composed of lighter elements, most likely water in some form. Why are there such differences among the four Galilean satellites? During the early formation of the solar system, Jupiter would have been very hot. This may have prevented lighter elements from condensing at the inner orbits. The mini system of Galilean satellites orbiting Jupiter resembles that of the solar system with the rocky, dense planets at the innermost orbits and the light, least dense planets at the outer orbits.
Animations of Io
Views of Io 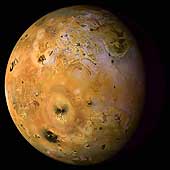 Color Image of Io
This color image of Io was created by combining the color channels of the low resolution USGS Voyager controlled color mosaic with Tayfun Oner's high resolution Galileo mosaic. The brown, orange areas are probably covered by sulphur or a mixture containing sulphur. The light areas may be sulphur dioxide snow and the pock-marks are mostly volcanic calderas up to 200 kilometers (124 miles) across. Mountainous regions exist near both poles, with some features rising 8 kilometers (5 miles) or more above their surroundings. (Courtesy A.Tayfun Oner) 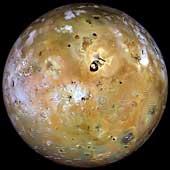 Io Feature Map
This is the highest resolution color global mosaic of Io. It was created by combining the color channels of the low resolution USGS controlled color mosaic with the high resolution B&W controlled USGS mosaic. It was then projected to an ortographic projection centered at 0 degrees latitude and 315 degrees longitude. (Courtesy A.Tayfun Oner)

Hubble Discovers Bright New Spot on Io
This pair of Hubble images of Jupiter's volcanic moon Io shows the surprising emergence of a 320-kilometer (200-mile) diameter, large yellowish-white feature near the center of the moon's disk (photo on the right). Scientists suggest the spot may be a new class of transient feature on the moon. For comparison, the photo on the left was taken in March 1994 before the spot emerged, and shows that Io's surface had undergone only subtle changes since it was last seen by the Voyager 2 probe in 1979. The new spot in the July 1995 Hubble image replaces a smaller whitish spot seen at about the same location in the March 1994 image. "The new spot surrounds the volcano Ra Patera, which was photographed by Voyager, and is probably composed of material, probably frozen gas, ejected from Ra Patera by a large volcanic explosion or fresh lava flows," according to John Spencer of Lowell Observatory in Flagstaff, Arizona. (Credit: J. Spencer, Lowell Observatory/NASA) 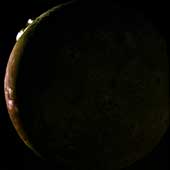 Io's Volcanic Plumes
Voyager 2 took this picture of Io on the evening of July 9, 1979, from a range of 1.2 million kilometers (745,700 miles). On the limb of Io are two blue volcanic eruption plumes about 100 kilometers (62 miles) high. These two plumes were first seen by Voyager 1 in March 1979 and are designated Plume 5 (upper) and Plume 6 (lower). They apparently had been erupting for a period of at least four months and probably longer. A total of six plumes were seen by Voyager 2, all of which were first seen by Voyager 1. Plume 1, the largest volcano viewed by Voyager 1, was no longer erupting when Voyager 2 arrived. Plume 4 was not viewed on the edge of Io's disc by Voyager 2 and, therefore, it is not known whether it was still erupting. (Copyright Calvin J. Hamilton)

Close-Up of Io's Surface
This image is the highest resolution image ever taken of Io. The resolution is 5.2 meters (18 feet) per picture element.

Galileo viewed the surface obliquely, tilted 72 degrees from straight overhead. Illumination is from the lower right, but the topographic shading is difficult to see because of the strong contrasts in brightness of the surface materials. The bright areas are generally higher in elevation than adjacent dark areas. The surface appears to have been eroded by an unknown process, in places exposing layers of bright and dark material. Evaporation of solid ice may also play a role in separating the bright and dark materials. North is toward the upper right. (Courtesy NASA/JPL) 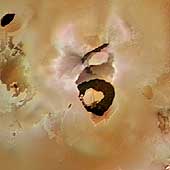 Loki Patera
This is a close up view of Io's northern hemisphere. The central feature has been named Loki Patera. The large dark area might be a lake of liquid sulphur with a raft of solid sulphur inside. (Copyright Calvin J. Hamilton)

Venting Gasses
This photograph of Io shows what appears to be a volcanic caldera that is venting gasses (the bright blue patch at left center). In the photo is a network of volcanic calderas with dark floors linked by bright red materials. The northernmost caldera has a bright blue patch on the floor. Scientists believe the bright blue patch may be clouds of gas issuing from volcanic vents. The gas clouds may condense to form extremely fine particles that appear blue. Since Voyager 1's infrared spectrometer has discovered sulfur dioxide on Io, it is possible that sulfur dioxide is the main component of the clouds. Sulfur dioxide clouds would rapidly freeze and snow back to the surface. It is also possible that dark areas in the floors of the calderas are pools of molten sulfur, a very dark form of sulfur. The image was taken March 5, 1979, as Voyager 1 approached Io, and was taken from 129,600 kilometers (80,500 miles). (Courtesy NASA/JPL)

P3 Prometheus
Voyager 1 took this picture of the P3 Prometheus volcano on March 4, 1979. The volcanic eruption can be seen on the limb of Io. (Credit: Calvin J. Hamilton)

Ra Patera
Ra Patera is a large shield volcano with multi colored flows. This image shows at least a dozen dark flows originating from the central dark vent. Some of these flows are 300 kilometers (186 miles) in length. (Copyright Calvin J. Hamilton)