It would seem that Io should have a substantial atmosphere due to its numerous volcanoes spewing out massive amounts of gas and lava. Yet the first scientific observations seemed to indicate that Io had no atmosphere. The first atmospheric measurement was made in 1971 when a bright star passed behind (occulted) Io. By measuring the time the star took to pass from one side of Io to the other, scientists were able to obtain an accurate measurement of its diameter as well as check for an atmosphere. The moment the star passed behind Io, it's light was extinguished. Had there been an atmosphere with a pressure of more than about 1 microbar, the star's light would have dimmed while passing through the atmosphere before being extinguished.

In 1973 Pioneer 10 flew by Jupiter and passed behind Io. By monitoring the radio signals during the spacecraft occultation, scientists discovered that Io had a high concentration of electrons close to its surface indicating that it had an ionosphere. This implied that there must be atmospheric gases to provide the source of electrons and ions. What gases were present was unknown at the time. Later telescopic observations discovered that a neutral cloud of Sodium and Potassium was associated with Io's orbit and ionized sulfur in the Jovian magnetosphere.

Io's Sodium Cloud: This image taken by the Galileo spacecraft shows the diffuse yellow glow of Io's sodium cloud that appears throughout much of the sky. The sodium atoms within Io's extensive material halo are scattering sunlight at the yellow wavelength of about 589 nanometers. [more]

In spite of the large volume of gas released through volcanic activity, Io's atmosphere is extremely thin, less than one millionth as dense as Earth's atmosphere. Most of the volcanic gas condenses back to the surface in the form of frost. Other molecules escape into space through a process of atmospheric sputtering. Io lies within an intense radiation belt where energetic electrons, protons, and ions bombard Io's fragile atmosphere ejecting molecules which become part of Io's plasma torus and neutral cloud of atoms orbiting Jupiter. Our own planet is bombarded with energetic electrons and ions streaming from the Sun; however, Earth is protected by a strong magnetic field that prevents its precious resources from escaping. Io's atmosphere is very patchy with higher concentrations of atmospheric density at midday and over active vents.

Mountains on Io are much taller than Earth's largest mountains, towering up to 52,000 feet (16 kilometers) high. Paradoxically, they do not appear to be volcanoes - there are no lava flows or plumes that issue from their summits. Scientists believe that the mountains are formed when blocks of Io's crust are uplifted along thrust faults. Angular mountains are thought to be younger, while older mountains have more subdued topography.

Frequently giant depressions or calderas abut Io's mountains which suggests some volcanic relationship. Calderas are formed by the collapse of the surface over empty magma chambers. Unlike Earth's calderas, many Io depressions have very straight margins, sharp corners, and are located next to mountains. In images of the Hi'iaka Patera depression and adjacent mountains, it looks as though two mountain blocks have split and slid apart by 145 kilometers (90 miles), forming a pull-apart basin like California's Death Valley or Salton Sea. This lateral movement may be driven by deep "mantle plumes" of rising hot rock masses within Io. 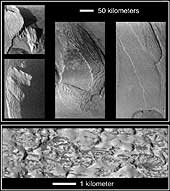 Collapsing Mountains on Io
These unusual mountains were captured by the Galileo spacecraft on October 10, 1999. The top four pictures show four different mountains at resolutions of about 500 meters per picture element. The bottom picture is a close-up of another mountain at a resolution of 9 meters per picture element. The lower resolution images show a range of mountain structures from angular peaks on the left to gentler plateaus, surrounded by very gently sloping debris aprons on the right.

These images illustrate the deterioration of Ionian mountains. The more angular mountains on the left are younger than the rounded mountains on the right. Almost all of the mountains exhibit ridges parallel to their margins. These ridges indicate material is moving down the sides of the mountains generating huge landslides as they collapse under the force of gravity. The ridges bear a striking resemblance to the rugged terrain surrounding giant Olympus Mons on Mars. The very high-resolution image shows a close-up of a degraded mountain with a lumpy looking terrain.

Haemus Mons
Haemus Mons is a mountain located near the south pole and in this image near the terminator of Io. Its base measures about 200 by 100 kilometers (124 by 62 miles) and rises to a height of 9 kilometers. Several mountain peaks are found on Io some measuring as high as 10 kilometers (6.2 miles) tall. (Copyright Calvin J. Hamilton) 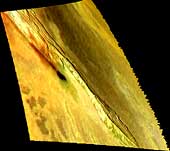 Mountain of Volcanic Origin
This unusual 240 kilometer long mountain is south of the volcanic hot spot named Zal. The bright red material is believed to contain a compound of sulfur that forms when sulfur is boiled at a high temperature. Active eruptions of molten rock are the most likely source for the heat. Other sulfur compounds cover the yellow areas, and the black areas are fresh silicate lava that has not yet been coated by the yellow sulfurous materials.

In this image, it is clear that the red material has blown out of a long crack along the western side of the mountain. Lava has flowed from this crack and filled a depression. 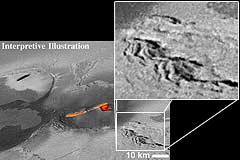 A feature of great interest is illustrated by the flat-topped mesa in this image. The mesa surrounds a giant calder of the Tvashtar Catena crater chain. The scalloped margins are typical of a process geologists call "sapping," which occurs when erosion takes place as fluid escapes from the base of a cliff. On Earth, such sapping features are caused by springs of ground water. Similar features on Mars are one of the key pieces of evidence for past water on the Martian surface. However, on Io, the liquid is presumed to be pressurized sulfur dioxide. The liquid sulfur dioxide changes to a gas almost instantaneously when it bubbles up to the near-vacuum of Io's surface, blasting away material at the base of the cliff. The sulfur dioxide gas eventually freezes out on the surface of Io in the form of a frost. As the frost is buried by later deposits, it can be heated and pressurized until it becomes a liquid. This liquid then flows out of the ground again, completing Io's version of the 'water cycle.'