Man's mind and spirit grow with the space in which they are allowed to operate. - Krafft A. Ehricke


Callisto [kah-LISS-toe] is the second largest moon of Jupiter, the third largest in the solar system, and is about the same size as Mercury. It orbits just beyond Jupiter's main radiation belt. Callisto is the most heavily cratered satellite in the solar system. Its crust is very ancient and dates back 4 billion years, just shortly after the solar system was formed.

Callisto has the lowest density (1.86 gm/cm3) of the Galilean satellites. From recent observations made by the Galileo spacecraft, Callisto appears to be composed of a crust about 200 kilometers (124 miles) thick. Beneath the crust is a possible salty ocean more than 10 kilometers (6 miles) thick. Beneath the ocean, is an unusual interior that is not entirely uniform nor does it vary dramatically. Prior to Galileo, scientists believed that Callisto's interior was totally undifferentiated, but Galileo data suggests that the interior is composed of compressed rock and ice with the percentage of rock increasing as depth increases. Meteorites have punctured holes in Callisto's crust, causing water to spread over the surface and forming bright rays and rings around the crater. Callisto has no known atmosphere.

Callisto
This image shows the heavily cratered surface of Callisto. It was taken by Voyager 2 on July 7, 1979. An enormous impact basin with concentric rings is located near the top and slightly left of center. (Copyright Calvin J. Hamilton)

The Interior of Callisto
This artistic cutaway view shows a model of the interior of Jupiter's moon Callisto. Before the Galileo spacecraft, Callisto was thought to be an inactive moon -- just a chunk of rock and ice. Data recently obtained from the Galileo spacecraft has revealed the surprising result that Callisto might have a salty ocean lying beneath its icy crust.

Callisto is the most heavily cratered satellite in the solar system. Its battered surface lies on top of an icy layer (shown as a whitish band) that is about 200 kilometers (124 miles) thick. Beneath the crust lies an ocean in excess of 10 kilometers (6 miles) as indicated by the blue band. The premise of an ocean came from studying the magnetic fields around Jupiter and its moons. It was found that Callisto's magnetic field varies (flows in various directions at different times) in response to the background magnetic field generated by Jupiter.

Beneath the ocean, Callisto seems to have a strange interior that is not entirely uniform and does not vary dramatically. Prior to Galileo, scientists believed that Callisto's interior was totally undifferentiated, but Galileo data suggests that the interior is composed of compressed rock and ice with the percentage of rock increasing as depth increases. (Copyright 1998 by Calvin J. Hamilton) 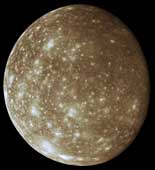 High-Resolution Image of Callisto
Jupiter's icy moon Callisto is shown here in approximate natural color. At the lower left is the impact structure, Asgard surrounded by concentric rings up to 1,700 kilometers (about 1,050 miles) in diameter. A second ringed structure with a diameter of about 500 kilometers (310 miles) is just below Asgard, partially obscured by the more recent, bright-rayed crater, Burr. The icy materials excavated by the younger craters contrast sharply with the darker and redder coatings on older surfaces of Callisto. These bright areas are believed to contain more clean ice than the rest of Callisto's generally 'dirty-ice' surface. (Copyright Calvin J. Hamilton)

Callisto's Valhalla Region
This close up of Callisto shows the heavily cratered surface and the prominent ring structure known as Valhalla. It was acquired by Voyager 1 on March 6, 1979. Valhalla's bright central area is about 300 kilometers across with sets of concentric ridges extending out to 1,500 kilometers from the center. (Copyright Calvin J. Hamilton)

Gipul Catena
This image shows a chain of craters on Callisto that is 620 kilometers long. The largest crater is 40 kilometers across. This is the longest of 12 or so such chains on Callisto. The chain probably formed from the collision of a comet that was tidally disrupted during close passage of Jupiter, such as the comet Shoemaker-Levy 9. (Copyright Calvin J. Hamilton)

Callisto's Valhalla Impact Structure
A portion of the central zone of the large impact structure Valhalla on Callisto was imaged by the Galileo spacecraft on November 4, 1996. The area shown here is centered at 16 degrees north, 55 degrees west and is about seven miles (11 kilometers) across. This is the highest resolution picture ever taken of Callisto and shows features as small as 200 feet (60 meters) across. The formation of Valhalla occurred early in Callisto's history; however, the central zone shown here is probably younger than Valhalla's surrounding structure. This newly acquired picture shows some small craters, although they have been softened or modified by downslope movement of debris, revealing bright ice-rich surfaces. In contrast to other areas on Callisto, most of the very smallest craters appear to have been completely obliterated. (Courtesy Arizona State University)

Asgard Impact Structure on Callisto
This four-frame mosaic shows the ancient impact structure Asgard on Callisto. This image is centered at 30 degrees north, 142 degrees west. The Asgard structure is approximately 1700 km across (1,056 mi) and consists of a bright central zone surrounded by discontinuous rings. The rings are tectonic features with scarps near the central zone and troughs at the outer margin. Several large impacts have smashed into Callisto after the formation of Asgard. The very young, bright-rayed crater Burr is located on the northern part of Asgard. This mosaic has been projected to show a uniform scale between the four mosiacked images. The image was processed by Deutsche Forschungsanstalt fuer Luft-und Raumfahrt e.V., Berlin, Germany.

Callisto Asgard Region as Viewed by NIMS
This view of Callisto's Asgard multi-ring structure was taken by the Near Infrared Mapping Spectrometer (NIMS) 90 minutes before closest approach. The false color image shows surface compositional differences, white=more ice, blue=less ice. The large bright/white area is the palimpsest or center of Asgard. The smaller bright area is Tornasuk, a crater with a diameter of about 70 km.

The infrared spectrum shows that Tornasuk exhibits a greater abundance of water ice compared with the surrounding region. This may be due to impact excavation revealing a more ice-rich subsurface and suggesting that the darker material is a relatively thin surface covering. This covering could be either impact debris material or a lag deposit of existing material from which the ice has evaporated away. (Courtesy NASA)

A Chain of Impact Craters on Callisto
A portion of a chain of impact craters on Callisto is seen in this image taken by the Galileo spacecraft on November 4, 1996. This crater chain on Callisto is believed to result from the impact of a split object, similar to the fragments of Comet Shoemaker-Levy 9 which smashed into Jupiter's atmosphere in July of 1994. This high-resolution view is of Callisto's northern hemisphere at 35 degrees north, 46 degrees west, and covers an area of about eight miles (13 kilometers) across. The smallest visible crater is about 140 yards (130 meters) across. The image was taken at a range of 974 miles (1,567 kilometers).

On a global scale, Callisto is heavily cratered, indicating the great age of its surface. At the scale of this image, it was anticipated that the surface would be heavily cratered as well; however, there is a surprising lack of small craters, suggesting that one or more processes have obliterated these and other small-scale features. For example, downslope movement of ice-rich debris could bury small craters. The bright slopes visible in this picture represent places where downslope movement has taken place, exposing fresh ice surfaces. (Courtesy Arizona State University)

View of Callisto from Voyager and Galileo
This mosaic was prepared from images obtained by three spacecraft: Voyager 1 (left side), Galileo (middle), and Voyager 2 (right side). The Voyager data were taken in 1979 but left a "gap" centered at longitude 290 degrees in the trailing hemisphere of Callisto. The Galileo Solid-State Imaging system photographed this area on its second orbit around Jupiter on 9 September, 1996 Universal Time. The resolution of the Galileo data is 4.3 kilometers/pixel (2.7 miles), meaning that the smallest visible feature is about 12 kilometers (7 miles) across. North is to the top of the picture.

Features of interest in the new Galileo data include a dark, smooth area in the northern latitudes (upper third) which appears to mantle older terrain. This could be dark ejecta from a small impact crater. Also visible is a fresh, sharp-rimmed crater some 90 km (56 miles) across named Igaluk (center left third of picture), and a bright zone in the south polar area (bottom of image) which could be an impact scar. (Courtesy NASA)