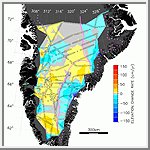 Greenland's southeastern glaciers are rapidly thinning and their lower elevations may be particularly sensitive to potential climate changes, a NASA study suggests.

"The results of this study are important in that they could represent the first indication of an increase in the speed of outlet glaciers," said Bill Krabill, principal investigator at NASA Goddard Space Flight Center's Wallops Flight Facility, Wallops Island, VA. An outlet glacier acts as a major ice drainage region for an ice sheet.

"The excess volume of ice transported by these glaciers has had a negligible effect on global sea level thus far, but if it accelerates or becomes more widespread, it would begin to have a detectable impact on sea level," Krabill said.

In the March 5 issue of SCIENCE, researchers report the glacial thinning is too large to have resulted from increased ice- surface melting or decreased snowfall. The researchers believe the thinning, as much as 30 feet over five years in some locations, is the result of increasing discharge speeds of glaciers flowing into the Atlantic Ocean.

Krabill said surface-melt water might be seeping to the bottom of glaciers. Such seepage may be reducing the friction between the ice and the rock below it, enabling the glaciers to slide with less friction across the bedrock and thus allow more ice to slip off into the ocean, according to Krabill.

"The results of this study are significant because they provide the first evidence of widespread thinning of low-elevation parts of one of the great polar ice sheets. The results also suggest that the thinning outlet glaciers must be flowing faster than necessary to remove the annual accumulation of snow within their basins," said Krabill.

"Why they are behaving like this is a mystery," said Krabill, "but it might indicate that the coastal margins of ice sheets are capable of responding quite rapidly to external changes, such as a potential warming of the climate."

Researchers noted that while some internal areas of Greenland that were surveyed showed ice thickening, areas along the coast showed ice thinning. "Taken as a whole, the surveyed region is in negative balance," Krabill said.

In 1993 and 1994, NASA researchers surveyed the Greenland ice sheet using an airborne laser altimeter flown on a NASA P-3 aircraft and measured the thickness of the entire ice sheet. Ten flight lines flown in 1993 in Southern Greenland were resurveyed in 1998. The flight lines in Northern Greenland flown in 1994 will be resurveyed in May 1999. Throughout the study, pilots have used the Global Positioning System and other navigational equipment to fly the same flight path some 400 meters above the icy surface.

The results showed three areas in the South accumulating at rates up to ten inches per year. These areas located in the internal sections of Greenland are in regions of high snowfall.

These surveys have established baseline data sets that will be extended with information from NASA's ICESAT spacecraft. The ICESAT satellite laser altimeter will be launched in 2001 to measure ice-surface elevations in Greenland and Antarctica.