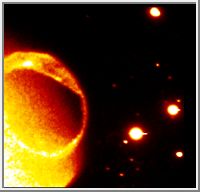 Initial pictures from NASA's Imager for Magnetopause to Aurora Global Exploration (IMAGE) spacecraft are revealing for the first time the global ebb and flow of hot, electrified gas (plasma) around the Earth in response to the solar wind. Severe disturbances in this region controlled by the Earth's magnetic field (the magnetosphere) are capable of disrupting satellites, telephone and radio communications, and power systems.

"IMAGE is the first weather satellite for space storms," said Dr. James L. Burch, Principal Investigator for IMAGE at Southwest Research Institute, San Antonio, Texas. "This revolutionary spacecraft makes these invisible storms visible. In a sense, IMAGE allows us to view the Earth through plasma-colored glasses. We eagerly anticipate the arrival of severe solar weather associated with solar maximum, which we are now entering."

Previous spacecraft explored this turbulent region by detecting particles and fields as they passed through them. This technique limited their vision to small portions of this vast and dynamic region, extending beyond the Moon on the Earth's night side.

"The old way of tracking magnetic storms is like trying to understand severe thunderstorms in the Midwest by driving around with a rain gauge out the window," said Dr. Thomas Moore, IMAGE Project Scientist at NASA's Goddard Space Flight Center, Greenbelt, Md. "With IMAGE, we will see the big picture, just like entire storm systems appear on the evening news with weather satellites."

The initial pictures from IMAGE will be presented at a press conference during the spring meeting of the American Geophysical Union May 31 at 2 P.M. EDT in Washington, D.C.

"These first images are an enticing glimpse at the spectacular results expected from IMAGE once we encounter really heavy weather in space," said Dr. James Green, Deputy Project Scientist for IMAGE at Goddard.

A suite of three Neutral Atom Imaging instruments is recording the glow of fast atoms coming from throughout the Earth's magnetic field. This reveals the shape and motion of the clouds of plasma that make up a magnetic storm.

The Far Ultraviolet Imaging instrument is collecting the first-ever images from space of the Earth's proton aurora. The aurora, commonly known as the northern and southern lights, is a ghostly light show seen most often at high latitudes of Earth. The dance of lights that is visible from the ground is caused by electrons striking and lighting up the atmosphere much like electricity lights up a television screen. The proton aurora is invisible to the naked eye and has never been viewed from space; from the ground, it is visible only in far-ultraviolet wavelengths.

The Extreme Ultraviolet Imager is capturing the first global images of the plasmasphere, which is the tenuous extension of the Earth's electrically charged upper atmosphere, or ionosphere. The plasmasphere extends about 12,500 miles (20,000 kilometers) into space. Images from this region will provide a sensitive indicator of the onset of magnetic storm activity.

The Radio Plasma Imager instrument provides a three-dimensional view of the plasmasphere by sounding it with radio pulses, like an ultrasound image of the human body. To accomplish this, it uses the longest antennas ever deployed in space, longer than the height of the Empire State Building. 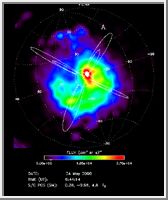 Plasmasphere
Depth sounding of the tenuous extension of the Earth's upper ionosphere about 20,000 kilometers into space around the Earth, called the plamasphere, using the Radio Plasma Imager instrument. The green traces correspond to echoes from the plasmasphere at varying depths. (Courtesy NASA) 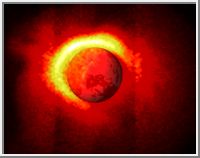 Ionized Helium Atmosphere
Ultraviolet image of sunlight scattered from the Earth's extended atmosphere of helium using the Extreme Ultraviolet Imager instrument. This image shows that the ionized helium atmosphere extends to about 2 - 3 times the size of the Earth. Irregularities at the fringe of the image, such as the upper left, indicate magnetic storm activity. This is the first time such features have been imaged. (Courtesy NASA) 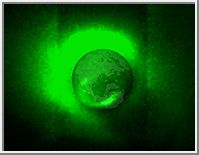 Aurora Viewd by Extreme Ultraviolet Imager
Ultraviolet image of the aurora at the peak of a small space storm using the Extreme Ultraviolet (EUV) Imager instrument on IMAGE. Brighter green corresponds to brighter auroral light. The view is towards the earth's night side, and the detailed, highly turbulent region near midnight reveals storm activity in the magnetic field surrounding Earth. (Courtesy NASA)

Aurora Showing Geomagnetic Substorm
Aurora are caused by the interaction of precipitating charged particles (electrons and ions) with the neutral gases of our atmosphere. Light from the Earth's aurora occur principally in two oval-shaped bands lying between ~65 and 75 degrees magnetic latitude and centered on the northern (aurora borealis) and southern (aurora australis) magnetic poles. IMAGE observes the aurora in several important wavelengths and has captured its first geomagnetic substorm. These observations are caused by precipitating electrons. This is a selected frame from a sequence which is available as a quicktime movie. (Courtesy NASA) 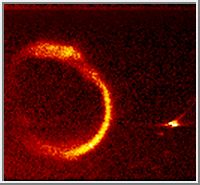 Electron/Proton Aurora Comparison
With IMAGE we can now simultaneously observe the proton and electron induced aurora. The image of the aurora on the left is from precipitating protons, in the center from precipitating electrons, and on the right from combined protons and electrons. The overlay to the right shows green where the electron aurora dominates, red where the proton aurora dominates, and yellow where both are comparable. (Courtesy NASA)