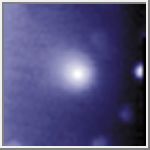 A Taste for Comet Water
When Comet LINEAR broke apart last year it revealed what many scientists thought all along: Water in Earth's oceans could have come from outer space.

Last year comet C/1999 S4 (better known as "Comet LINEAR") surprised astronomers by breaking apart as it passed near the Sun. Now the long-dead comet has surprised them again: New research shows Comet LINEAR was likely made up of water with the same isotopic composition as water found here on Earth. The finding supports a controversial idea that cometary impacts billions of years ago could have provided most of the water in Earth's oceans.

"The idea that comets seeded life on Earth with water and essential molecular building blocks is hotly debated, and for the first time, we have seen a comet with the right composition to do the job," said Michael Mumma of NASA's Goddard Space Flight Center. Mumma is the lead author of a paper about this research that appeared in the May 18th issue of Science.

A separate announcement in the same issue of Science describes how scientists using an instrument on board the Solar and Heliospheric Observatory watched a cloud of hydrogen (the by-product of dissociating water vapor) billow into space as Comet LINEAR's ice evaporated in the warmth of the Sun. That team estimates the comet harbored within its nucleus about 3.3 billion kilograms of water, enough to fill a small lake.

Comet LINEAR had plenty of water, but was it the same type of water found here on Earth?

Comets and Earth's oceans both contain a small amount of so-called "heavy water" composed of equal parts hydrogen, oxygen, and deuterium. (Deuterium is an isotope of hydrogen with one extra neutron in its nucleus.) The chemical formula of heavy water is HDO; normal water is H2O.

There is growing evidence that comets born in the outer solar system (near Neptune's orbit, for example) contain ices relatively rich in heavy water -- too rich, in fact. They don't match the isotopic composition of water in Earth's oceans.

However, Comet LINEAR apparently was born in a part of the solar system where water was more Earth-like. Using telescopes at the W. M. Keck Observatory and the NASA Infrared Telescope Facility, Mumma and colleagues studied the comet's chemistry and concluded that it must have formed around the orbit of Jupiter.

Chemistry tells astronomers where a comet formed in the following way: Certain molecules like carbon monoxide (CO), methane (CH4), ethane (C2H6), and acetylene (C2H2) are "volatile." They freeze only at extremely low temperatures. Comets that formed in the outer solar system (where it is very, very cold) would include such frozen molecules in their icy nuclei. Comets that formed nearer the Sun (where those substances remain in gaseous form) would contain fewer volatiles.

According to some laboratory experiments, a comet born billions of years ago ago in the neighborhood of Jupiter would contain about the same fraction of heavy water as Earth's present-day oceans. Unfortunately, Comet LINEAR broke up before this could be directly confirmed, but its low concentration of volatile organic molecules provides a strong indication that it carried the same kind of water that fills terrestrial seas.

Comets born near Jupiter are rare today because the giant planet's gravity long ago flung most of them into interstellar space. Nevertheless, they would have been numerous during the solar system's formative years. Astronomers think the primordial Earth would have intercepted more comets from the "Jupiter zone" (which is comparatively poor in heavy water) than ones that formed in the outer solar system (which is rich in heavy water).

The "Jupiter zone" received more light and was warmer than the outer solar system. As a result, more reactions occurred in the gas near Jupiter and greater amounts of many complex organic molecules were available to wind up in comets. Also, Jupiter's powerful gravity kept collision speeds between comets near it high, preventing them from growing very large. Both factors may have given a boost to life on Earth.

"It's like being hit by a snowball instead of an iceberg," said Mumma. "The smaller comets from Jupiter's region impacted Earth relatively gently, shattering high in the atmosphere and delivering most of their organic molecules intact. Such comets would have had a greater portion of life's building blocks -- the complex organic molecules -- to begin with. This means life on Earth did not have to start completely from scratch. Instead, it was delivered in kit form from space."

Editor's Note: In 1999 cosmochemist Geoff Blake and colleagues at Caltech showed that Comet Hale-Bopp contained too much heavy water to match Earth's oceans.Those findings triggered widespread reports that comets couldn't be a source of terrestrial water. Now Comet LINEAR has shown us that Earth's oceans could hail from comets after all. But do they? Comets aren't the only candidate water sources for Earth. Our oceans may have been delivered by asteroids (another controversial idea) or perhaps water was caught up in the body of Earth as it formed and later released by volcanic outgassing (as many of us learned in school). Or all of the above! The origin of Earth's oceans remains a mystery, a topic for continued research.