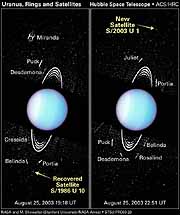 Hubble Uncovers Smallest Moons Yet Seen Around Uranus Astronomers have discovered two of the smallest moons yet found around Uranus. The new moons, uncovered by NASA's Hubble Space Telescope, are about 8 to 10 miles across (12 to 16 km) -- about the size of San Francisco.

The two moons are so faint they eluded detection by the Voyager 2 spacecraft, which discovered 10 small satellites when it flew by the gas giant planet in 1986. The newly detected moons are orbiting even closer to the planet than the five major Uranian satellites, which are several hundred miles wide. The two new satellites are the first inner moons of Uranus discovered from an Earth-based telescope in more than 50 years. The International Astronomical Union (IAU) will announce the finding today. The Hubble telescope observations also helped astronomers confirm the discovery of another tiny moon that had originally been spotted in Voyager pictures.

"It's a testament to how much our Earth-based instruments have improved in 20 plus years that we can now see such faint objects 1.7 billion miles (2.8 billion km) away," says Mark Showalter, a senior research associate at Stanford University in Stanford, Calif., who works at the NASA Ames Research Center, in Moffett Field, Calif. Showalter and Jack Lissauer, a research scientist at the NASA Ames Research Center, used Hubble's Advanced Camera for Surveys (ACS) to make the discovery. The images were taken Aug. 25, 2003.

The newly discovered moons are temporarily designated as S/2003 U 1 and S/2003 U 2 until the IAU formally approves their discovery. S/2003 U 1 is the larger of the two moons, measuring 10 miles (16 km) across. The Hubble telescope spotted this moon orbiting between the moons Puck, the largest satellite found by Voyager, and Miranda, the innermost of the five largest Uranian satellites. Astronomers previously thought this region was empty space. S/2003 U 1 is 60,600 miles (97,700 km) away from Uranus, whirling around the giant planet in 22 hours and 9 minutes.

"The inner swarm of 13 satellites is unlike any other system of planetary moons," says co-investigator Jack Lissauer. "The larger moons must be gravitationally perturbing the smaller moons. The region is so crowded that these moons could be gravitationally unstable. So, we are trying to understand how the moons can coexist with each other."

One idea is that some of the moons are young and formed through collisions with wayward comets. For example, the Hubble telescope spotted two small moons orbiting very close to the moon Belinda. One of them is the newly detected moon, S/2003 U 2, which is traveling inside Belinda's orbit. The other, designated S/1986 U 10, was found in 1999 by astronomer Erich Karkoschka of the University of Arizona, who uncovered the satellite in Voyager pictures. But the finding required confirmation by an Earth-based telescope. This is the first time this moon has been seen since Voyager snapped a picture of it. S/1986 U 10 is 750 miles (1,200 km) away from Belinda.

"Not all of Uranus's satellites formed over 4 billion years ago when the planet formed," Lissauer says. "The two small moons orbiting close to Belinda, for example, probably were once part of Belinda. They broke off when a comet smashed into Belinda."

The astronomers hope to refine the orbits of the newly discovered moons with further observations. "The orbits will show how the moons interact with one another, perhaps showing how such a crowded system of satellites can be stabilized," Showalter explains. "This could provide further insight into how the moon system formed. Refining their orbits also could reveal whether these moons have any special role in confining or 'shepherding' Uranus's 10 narrow rings."

Astronomers stretched the limit of Hubble's ACS to find the tiny satellites. "These moons are 40 million times fainter than Uranus," Showalter says. "The moons are at 25th magnitude and Uranus is at sixth magnitude. They are blacker than asphalt, if their composition is like the other small, inner moons. So they don't reflect much light. Even with the sensitivity and high resolution of Hubble's ACS, we had to overexpose the images of Uranus to pinpoint the moons."

The newly detected moons, when approved by the IAU, will bring the Uranian satellite total to 24. Uranus ranks third in the number of IAU-certified moons behind Jupiter (38) and Saturn (30). Excluding the outer moons that travel in elongated orbits and are probably captured asteroids, Uranus holds the record for the most satellites with 18 in its inner system. All of them have nearly circular orbits. Saturn is second with 17.