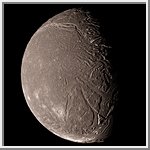 Ariel, a Moon of Uranus
Uranus I

Ariel [AIR-ee-al] is a relatively small satellite and is the brightest moon of Uranus. The surface is pock-marked with craters, but the most outstanding features are long rift valleys stretching across the entire surface. Canyons much like the ones on Mars appear in the pictures. The canyon floors appear as though they have been smoothed by a fluid. The fluid could not have been water because water acts like steel at these temperatures. The flow marks might have been made by ammonia, methane or even carbon monoxide.


This image of Ariel shows a world pock-marked with craters. Across its surface long rift valleys extend. Ariel has canyons similar to those on Mars, with canyon floors that appear to have been smoothed by a fluid. The fluid could not have been water because water acts like steel at these temperatures. The flow marks might have been made by ammonia, methane or even carbon monoxide. (Copyright Calvin J. Hamilton)

High Resolution Mosaic of Ariel
This image of Ariel is a a composite of four clear filter images taken by the Voyager 2 spacecraft on January 24, 1986, from a distance of 130,000 kilometers (80,000 miles). Two of these images that covered the terminator on the right were smeared because of the longer exposure times.

Much of Ariel's surface is densely pitted with craters 5 to 1O kilometers (3 to 6 mi) across. These craters are close to the threshold of detection in this picture. Numerous valleys and fault scarps crisscross the highly pitted terrain. Voyager scientists believe the valleys have formed over down-dropped fault blocks (graben); apparently, extensive faulting has occurred as a result of expansion and stretching of Ariel's crust. The largest fault valleys, near the terminator at right, as well as a smooth region near the center of this image, have been partly filled with deposits that are younger and less heavily cratered than the pitted terrain. Narrow, somewhat sinuous scarps and valleys have been formed, in turn, in these young deposits. It is not clear whether these sinuous features have been formed by faulting or by the flow of fluids. (Copyright Calvin J. Hamilton)

Mercator Map of Ariel
This image is a mercator map of Ariel. The map covers from 70 to -70 degrees latitude with 0 degree longitude located at the center. The scale is 2km/pixel at the equator. (Courtesy A. Tayfun Oner)

Polar Stereographic Map of Ariel
This image is a polar stereographic map of the southern hemisphere of Ariel. Zero degrees longitude is at the top. The best unsmeared Voyager 2 images of Ariel were used in making this map. (Courtesy A. Tayfun Oner)