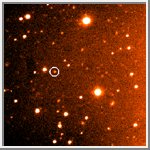 The moons Caliban (S/1997 U 1) and Sycorax (S/1997 U 2) were first detected on September 6 and 7, 1997 in images obtained by the Hale 5-meter telescope at Palomar Observatory. Additional observations of the satellites were made at Palomar, Hawaii, and New Mexico. The discoveries were made by Brett Gladman, Phil Nicholson, Joseph Burns, and JJ Kavelaars and were reported in the IAU Circular 6764. These two satellites are the faintest ever imaged from the ground. Their discovery was made possible by the use of a large telescope and a very efficient detector.

Moons of Uranus have traditionally been named after characters from the poetry of Shakespeare and Pope. The satellite discovery team suggested to the International Astronomical Union (IAU) that the names Caliban and Sycorax be given to these new satellites. (The IAU is the committee which officially approves the names of planetary moons.) Caliban came from a character in Shakespeare's play The Tempest. He was a deformed son of the witch Sycorax who imprisoned the fairy Ariel (a moon of Uranus) for disobedience. In The Tempest, the magician Prospero frees Ariel from Sycorax's spell and makes Caliban a slave. Uranus' moon Miranda was named after a daughter of Prospero.

Caliban and Sycorax are the first moons around Uranus to be called irregular satellites, due to their retrograde and highly inclined orbits. The other giant planets such as Jupiter, Saturn, and Neptune are known to possess similar irregular moons. Such satellites are believed to have been captured early in the solar system's life from interplanetary orbits.

Caliban and Sycorax appear quite red indicative of the presence of organic molecules in their icy surfaces. Such molecules are formed by the bombardement of cosmic-rays over billions of years. Their composition "is probably a plum-pudding mixture of rocks and ice" according to Nicholson.

Animations of Sycorax
Views of Caliban and Sycorax

Discovery image of Sycorax
This shows the discovery image of brighter of the two new moons of Uranus. It is designated as S/1997 U 2 and later named Sycorax. Notice the motion of the moon (circled) with respect to the background stars. The images were taken roughly one hour apart on September 7, 1997. A faint asteroid in the main belt (not circled) may also be observed and identified by its much faster rate of motion. (Credit Brett Gladman, Canadian Institute for Theoretical Astrophysics and Cornell University)

Discovery image of Caliban (S/1997 U 1)
This shows the discovery image Caliban, a faint moon of Uranus. It was designated as S/1997 U 1 and was later named Caliban. The glare from Uranus, which was placed intentionally off the frame to avoid saturating the detector, is visible at the right. (Credit Brett Gladman, Canadian Institute for Theoretical Astrophysics and Cornell University)

Nicer Color Image of Caliban
This shows another discovery image of Caliban. The moon must be located by looking at the above image. (Credit Brett Gladman, Canadian Institute for Theoretical Astrophysics and Cornell University)

Positions of the Moons Relative to Uranus
This diagram shows the position of the moons relative to Uranus. Uranus is shown at the center of the plot (not to scale). The circular orbits of the outermost two previously known moons (Titania and Oberon) surround the planet, and appear as ellipses because the orbits viewed from Earth are somewhat edge on. The four search fields for the discovery observations of September 6 and 7 surround the planet, each box (dashed) showing one field that the digital detector saw during a single exposure. The fainter moon was discovered almost directly east of the planet (note that east is to the left when looking up at the sky while facing south). The brighter moon was west and somewhat north at the time of discovery. The arcs that the satellites followed after discovery are shown, corresponding to the preliminary fits to the orbits of the moons, calculated by Brian Marsden of the Minor Planet Center at Harvard University. The observations from the Palomar 5-meter telescope are shown as large dots. The small squares on October 9 and 18 are two of several observations beginning on the former date by the amateur astronomer Warren Offut. The predicted paths are shown out until November 15th, 1997. Observations after this date will be difficult due to the fact that the Earth is moving to the opposite side of the Sun than Uranus, and so the planet will become unobservable until the spring of 1998. (Credit Brett Gladman, Canadian Institute for Theoretical Astrophysics and Cornell University)