March 12, 2007: When scientists announce they're about to calibrate their instruments, science writers normally put away their pens. It's hard to write a good story about calibration. This may be the exception:

On Feb. 25, 2007, NASA scientists were calibrating some cameras aboard the STEREO-B spacecraft and they pointed the instruments at the sun. Here is what they saw: 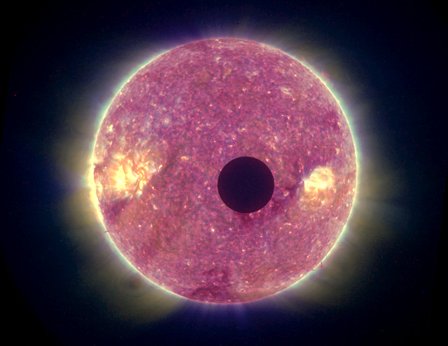 "What an extraordinary view," says Lika Guhathakurta, STEREO Program Scientist at NASA headquarters. The fantastically-colored star is our own sun as STEREO sees it in four wavelengths of extreme ultraviolet light. The black disk is the Moon. "We caught a lunar transit of the sun," she explains.

The purpose of the experiment was to measure the 'dark current' of STEREO-B's CCD detectors. The idea is familiar to amateur astronomers: Point your telescope at something black and see how much 'dark current' trickles out of the CCD. Later, when real astrophotography is taking place, the dark current is subtracted to improve the image.

In this case, the Moon served as a black calibration disk backlit by the sun. "The observation was no accident," she says. Mission controllers arranged the alignment with a small tweak to STEREO-B's orbit last December and engineers have been waiting for the dark current data ever since.

"The images have an alien quality," notes Guhathakurta. "It's not just the strange colors of the sun. Look at the size of the Moon; it's very odd." When we observe a lunar transit from Earth, the Moon appears to be the same size as the sun—a coincidence that produces intoxicatingly beautiful solar eclipses. The silhouette STEREO-B saw, on the other hand, was only a fraction of the sun's diameter. "It's like being in the wrong solar system."

The Moon seems small because of STEREO-B's location. The spacecraft circles the sun in an Earth-like orbit, but it lags behind Earth by one million miles. This means STEREO-B is 4.4 times further from the Moon than we are, and so the Moon looks 4.4 times smaller.

STEREO-B has a sister ship named STEREO-A. Both are on a mission to study the sun. While STEREO-B lags behind Earth, STEREO-A orbits one million miles ahead ("B" for behind, "A" for ahead). The gap is deliberate: it allows the two spacecraft to capture offset views of the sun. Researchers can then combine the images to produce 3D stereo movies of solar storms.

Of particular interest are coronal mass ejections (CMEs), billion ton clouds of electrified gas hurled into space by explosions on the sun. "STEREO's ability to see these clouds in 3-dimensions will revolutionize our understanding of CMEs and improve our ability to predict when they will hit Earth," she says.

The STEREO mission is still in its early stages. The two spacecraft were launched in Oct. 2006 and reached their stations on either side of Earth in January 2007. Now it's time for check-out and calibration. The first 3D views of solar storms are expected in April.

So science writers, ready your pens. If the calibration runs are any indication, the actual data will be something to write about.