Sharpest View of the Sun

The first images from the Swedish 1-m Solar Telescope on the Canary Island of La Palma show new solar features of hitherto unknown phenomena in sunspots. The resolution achieved with adaptive optics that adjust the shape of its mirror a thousand times a second in order to compensate for the ever changing atmosphere. The images produced by the telescope are 1,200 times better than normal eyesight and show thin dark cores in thread-like structures that surround the darkest part of a sunspot.

Sunspots are curious dark spots on the solar disk that are concentrations of strong magnetic fields that block upwelling gas from the solar interior. This produces darker, cooler regions on the Sun. A large sunspot consists of a dark umbra that is the coolest region with brighter penumbra along the outer edges. The images show the penumbra consists of thin, long filaments. The penumbra is in constant motion with gas flows along the filaments. 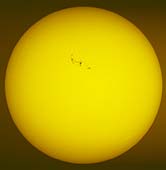 Sunspot Group
This image of the whole solar disk shows the sunspot group size of the images. The diameter of the Sun is 100 times larger than the diameter of the Earth. The image was recorded with a finder telescope at about the same time as the 15 July images and movies below. (Courtesy Royal Swedish Academy of Sciences)

Penumbra
Part of the largest sunspot in Active Region 10030 recorded on 15 July 2002 with the Swedish 1-m Solar Telescope on La Palma. This image was post-processed with the so-called Phase-Diversity Technique, making it the highest-resolution solar image ever. The tickmarks around the edge of the image is there to show the scale. The distance between two ticks is 1000 km. The central part of the sunspot ("the umbra") looks dark because the strong magnetic fields there stop upwelling hot gas from the solar interior. The thread-like structures surrounding the umbra make up the penumbra. Dark cores are clearly visible in some of the bright penumbral filaments that stick out into the umbra. (Courtesy Royal Swedish Academy of Sciences)

Solar Structure Details
Examples of new kinds of solar structures found in or near sunspots with the Swedish 1-m Solar Telescope on La Palma. Panels a, b, and c show small sunspots ("pores") that have thin dark lines around their edges - dubbed "hairs". The surrounding solar surface show dark lines we call "canals". Panel d shows penumbral filaments with dark cores and one of the filaments seems to be twisted. The tickmarks around the edge of the images show the scale. The distance between two ticks is 1000 km. (Courtesy Royal Swedish Academy of Sciences)