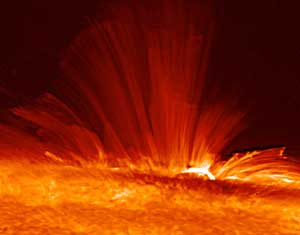 NASA released on Wednesday never-before-seen images that show the sun's magnetic field is much more turbulent and dynamic than previously known. The international spacecraft Hinode, formerly known as Solar B, took the images.

Hinode, Japanese for "sunrise," was launched Sept. 23, 2006, to study the sun's magnetic field and how its explosive energy propagates through the different layers of the solar atmosphere. The spacecraft's uninterrupted high-resolution observations of the sun will have an impact on solar physics comparable to the Hubble Space Telescope's impact on astronomy.

"For the first time, we are now able to make out tiny granules of hot gas that rise and fall in the sun's magnetized atmosphere," said Dick Fisher, director of NASA's Heliophyics Division, Science Mission Directorate, Washington. "These images will open a new era of study on some of the sun's processes that effect Earth, astronauts, orbiting satellites and the solar system."

Hinode's three primary instruments, the Solar Optical Telescope, the X-ray Telescope and the Extreme Ultraviolet Imaging Spectrometer, are observing the different layers of the sun. Studies focus on the solar atmosphere from the visible surface of the sun, known as the photosphere, to the corona, the outer atmosphere of the sun that extends outward into the solar system.

"By coordinating the measurements of all three instruments, Hinode is showing how changes in the structure of the magnetic field and the release of magnetic energy in the low atmosphere spread outward through the corona and into interplanetary space to create space weather," said John Davis, project scientist from NASA's Marshall Space Flight Center, Huntsville, Ala.

Space weather involves the production of energetic particles and emissions of electromagnetic radiation. These bursts of energy can black out long-distance communications over entire continents and disrupt the global navigational system.

"Hinode images are revealing irrefutable evidence for the presence of turbulence-driven processes that are bringing magnetic fields, on all scales, to the sun's surface, resulting in an extremely dynamic chromosphere or gaseous envelope around the sun," said Alan Title, a corporate senior fellow at Lockheed Martin, Palo Alto, Calif., and consulting professor of physics at Stanford University, Stanford, Calif.

Hinode is a collaborative mission led by the Japan Aerospace Exploration Agency and includes the European Space Agency and Britain's Particle Physics Astronomy Research Council. The National Astronomical Observatory of Japan, Tokyo, developed the Solar Optical Telescope, which provided the fine-scale structure views of the sun's lower atmosphere, and developed the X-ray Telescope in collaboration with the Smithsonian Astrophysical Observatory of Cambridge, Mass. The X-ray Telescope captured the rapid, time-sequenced images of explosive events in the sun's outer atmosphere.

"By following the evolution of the solar structures that outline the magnetic field before, during and after these explosive events, we hope to find clear evidence to establish that magnetic reconnection is the underlying cause for this explosive activity," said Leon Golub of the Smithsonian Astrophysical Observatory.

Developing Sunspot
Hinode's Solar Optical Telescope (SOT) provides crystal-clear images of features on the sun's surface. This video shows a whirl of a new developing sunspot colliding with an existing spot that explodes into a major solar flare. This solar flare, captured on December 13, 2006, produced high-energy protons that reached the Earth at the time of STS-116 Space Shuttle flight. The flare is shown in three different wavelengths. (Courtesy NASA/JAXA)

Sunspot Magnetic Field
Sunspots contain a strong magnetic field. Scientists believe that this magnetic field is generated by flows of plasma and gas deep below the surface of the sun, in the process called a dynamo. With Hinode, scientists discovered a new class of dynamo, referred to as a "chaotic dynamo" that is visible on the surface of the sun, called the photosphere. (Courtesy NASA/JAXA)

Sun Chromosphere
Hinode captures this very dynamic movie of the chromosphere. The chromosphere is a thin "layer" of solar atmosphere "sandwiched" between visible surface, photosphere, and corona. The chromosphere is the source of ultraviolet radiation. Before these images, scientists thought the chromosphere was a motionless "layer." Hinode shows that this description is obsolete. The observatory reveals a chromosphere that appears as constantly moving field lines like grassland with tall grass swaying under the wind. (Courtesy NASA/JAXA)

Solar Flare
The large frame shows a solar flare on the limb of the sun taken by Hinode's Solar Optical Telescope (SOT). The small box shows the same flare captured by the X-ray Telescope (XRT). The combination of these two images shows how interconnected and dynamic are the processes throughout the solar atmosphere. (Courtesy NASA/JAXA)

Solar Corona
The sun's outer atmosphere, known as corona, is the spawning ground for the largest explosions in the solar system. By combining observations from Hinode's optical, X-ray, and Extreme Ultraviolet imaging instruments, scientists will be able to study how changes in the sun's magnetic field trigger powerful solar flares and coronal mass ejections that affect the Earth. (Courtesy NASA/JAXA)

Plasma of the Sun
Taken by Hinode's Solar Optical Telescope on Jan. 12, 2007, this image of the sun reveals the filamentary nature of the plasma connecting regions of different magnetic polarity. Hinode captures these very dynamic pictures of the chromosphere. The chromosphere is a thin "layer" of solar atmosphere "sandwiched" between the visible surface, photosphere, and corona. (Courtesy Hinode JAXA/NASA)

Magnetic Field Around a Sunspot
Taken by Hinode's Solar Optical Telescope on Jan. 12, 2007, this image of the sun reveals the filamentary nature of the plasma connecting regions of different magnetic polarity. Hinode captures these very dynamic pictures of the chromosphere. The chromosphere is a thin "layer" of solar atmosphere "sandwiched" between the visible surface, photosphere, and corona. (Courtesy Hinode JAXA/NASA)

The Sun's Chromosphere
Taken by Hinode's Solar Optical Telescope on Nov. 11, 2006, this image reveals the fine scale structure in the chromosphere that extends outward above the top of the convection cells, or granulation, of the photosphere. The structure results from the interaction of hot ionized gas with the magnetic field. (Courtesy Hinode JAXA/NASA) 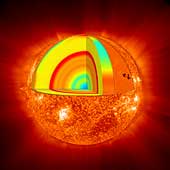 Layers of the Sun
The sun and its atmosphere consist of several zones or layers. From the inside out, the solar interior consists of the core, the radiative zone, and the convection zone. The solar atmosphere is made up of the photosphere, the chromosphere, a transition region, and the corona. Beyond the corona is the solar wind, which is actually an outward flow of coronal gas. Because astronomers cannot see inside the sun, they have learned about the solar interior indirectly. Part of their knowledge is based on the observed properties of the sun as a whole. Some of it is based on calculations that produce phenomena in the observable zones. (Courtesy NASA)