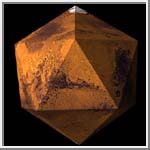 The icosahedron is a 20-sided polyhedron with each side made up of an equilateral triangle. Each vertex is formed by joining five triangle faces together. Ancient Greeks discovered that certain solid objects could be made from flat polygons such as the equilateral triangle and square. A tetrahedron is made from 4 triangles, a cube from six squares, an octahedron from 8 triangles, a dodecahedron from 12 pentagons and the icosahedron from 20 triangles. As the number of faces increases in the polyhedron, its shape becomes more spherical.

Each face of the planetary Icosahedron displays a part of the (nearly spherical) planetary surfaces. The triangles are folded so that adjacent triangles are joined exactly at their closest edges. The cut-out pattern forms the complete globe with the North and South Poles at opposite vertices. The overall size of an assembled globe is approximately 2.75 inches if printed on an 8 1/2 x 11 piece of paper and 3.75 inches if printed on an 8 1/2 x 14 page.

To assemble the icoshedron cut along the edges of the map. You can use tape or glue to asseble the globe. Double-sided tape works well. The challenge is in connecting the last edges together. Good luck and have fun.

All of these icosahedrons are © copyrighted 1998-2001 by Calvin J. Hamilton. Permission is granted for teachers to use the planetary icosahedron in classroom activities. Teachers may make copies for their students as long as the copies are given freely to them. Under no circumstance may the icosahedrons be used for-profit or commercial use without contacting Calvin J. Hamilton. More images will be added as I have time to create them. The Idea for creating this page was by A. Tayfun Oner.