Using NASA's Hubble Space Telescope to view the ninth planet in our solar system, astronomers discovered Pluto may have not one, but three moons.

If confirmed, the discovery of the two new moons could offer insights into the nature and evolution of the Pluto system; Kuiper Belt Objects with satellite systems; and the early Kuiper Belt. The Kuiper Belt is a vast region of icy, rocky bodies beyond Neptune's orbit. 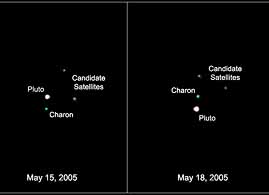 The Hubble Space Telescope images left, taken by the Advanced Camera for Surveys, reveal Pluto, its large moon Charon, and the planet's two new candidate satellites. Between May 15 and May 18, 2005, Charon, and the potential moons, provisionally designated P1 and P2, all appear to rotate counterclockwise around Pluto.

P1 and P2 move less than Charon because they are farther from Pluto, and therefore would be orbiting at slower speeds. P1 and P2 are thousands of times less bright than Pluto and Charon. The enhanced-color images of Pluto (the brightest object) and Charon (to the right of Pluto) were constructed by combining short exposure images. The images of the new satellites were made from longer exposures. Click image for full resolution.

"If, as our new Hubble images indicate, Pluto has not one, but two or three moons, it will become the first body in the Kuiper Belt known to have more than one satellite," said Hal Weaver of the Johns Hopkins Applied Physics Laboratory, Laurel, Md. He is co-leader of the team that made the discovery.

Pluto was discovered in 1930. Charon, Pluto's only confirmed moon, was discovered by ground-based observers in 1978. The planet resides about 3 billion miles from the sun in the heart of the Kuiper Belt.

"Our result suggests other bodies in the Kuiper Belt may have more than one moon. It also means planetary scientists will have to take these new moons into account when modeling the formation of the Pluto system," said Alan Stern of the Southwest Research Institute, Boulder, Colo. Stern was co-leader of the research team.

The candidate moons, provisionally designated S/2005 P1 and S/2005 P2, were observed approximately 27,000 miles away from Pluto. The objects are roughly two to three times as far from Pluto as Charon.

The team plans to make follow-up Hubble observations in February to confirm the newly discovered objects are truly Pluto's moons. Only after confirmation will the International Astronomical Union consider names for S/2005 P1 and S/2005 P2.

The Hubble's Advanced Camera for Surveys observed the two new candidate moons on May 15, 2005. The candidates are roughly 5,000 times fainter than Pluto. Three days later, Hubble looked at Pluto again. The two objects were still there and appeared to be moving in orbit around Pluto.

The team looked long and hard for other potential moons around Pluto. "These Hubble images represent the most sensitive search yet for objects around Pluto," said team member Andrew Steffl of the Southwest Research Institute. "It is unlikely that there are any other moons larger than about 10 miles across in the Pluto system," he said.

The Hubble Space Telescope is a project of international cooperation between NASA and the European Space Agency. The Space Telescope Science Institute in Baltimore conducts Hubble science operations. The Institute is operated for NASA by the Association of Universities for Research in Astronomy, Inc., Washington.

Additonal Images of the New Moons 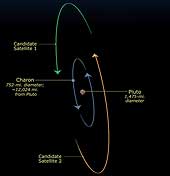 Pluto's Moon May Have Company
Hubble reveals two previously undetected satellites likely orbiting Pluto in the same plane as Pluto's moon, Charon. The two objects are estimated to have diameters between 40 and 125 miles (64 and 200 kilometers) and orbit roughly 27,000 miles (43,000 kilometers) from Pluto.

Hubble Views the Pluto System
These Hubble Space Telescope images, taken by the Advanced Camera for Surveys, reveal Pluto, its large moon Charon, and the planet's two new putative satellites. In the short-exposure image [left], taken June 11, 2002, the candidate moons cannot be seen. They do, however, appear in the middle and right-hand images. Longer exposure times were used to take these images. Pluto and Charon are overexposed in these images, causing the bright streaks or "blooms" that emerge vertically from them. The candidate moons are not overexposed because they are thousands of times less bright than Pluto and Charon. In these unprocessed images, various optical artifacts of the Advanced Camera for Surveys system are visible, such as the radial spokes of light caused by the telescope's optics. The enhanced-color images of Pluto and Charon were constructed by combining images taken in filters near 475 nanometers (blue) and 555 nanometers (green-yellow). The images of the new satellites were taken in a single filter centered near 606 nanometers (yellow), so no color information is available for them. 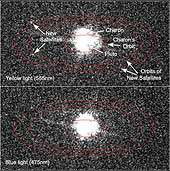 The Pluto system on June 14, 2002
A careful search of Hubble images taken with the ACS/HRC on June 14th, 2002, reveals two objects that are consistent with the expected locations of the newly-discovered satellites. One image (top) was taken in yellow light (555 nm) and the other (bottom) was taken in blue light (475 nm). The ellipse shows the orbital path of the new satellites derived from the May 2005 Hubble observations. The satellites should lie somewhere along this ellipse and, indeed, there are two objects along the predicted path, thus confirming the 2005 observations. 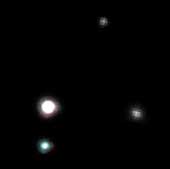 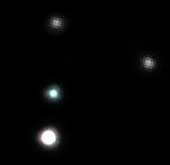