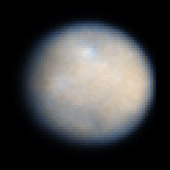 Ceres was named after the Roman goddess of the harvest, of growing plants, and motherly love. It is the smallest of the dwarf planets, a new category of astronomical bodies created by the International Astronomical Union in 2006. Dwarf planets currently includes Pluto, Eris, and Ceres.. Pluto's demotion from the list of solar system planets grabbed front-page headlines in 2006. But the debate over the qualifications for planethood reaches back to the discovery of Ceres.

Ceres was discovered on January 1, 1801 by astronomer Giuseppe Piazzi, a monk in Sicily and the founding director of the Palermo Astronomical Observatory. Ceres was found within a gap between Mars and Jupiter where a planet was expected to reside, based on the spacing of the known planets in the solar system. Known as the Titius-Bode Law, this prediction was named for the astronomers who had noticed in the 1760s and 1770s that the relative distances of the six known planets from the Sun fit a mathematical relationship. Although it is called a "law," it has no basis in physics.

According to Titius-Bode, a planet should exist between Mars and Jupiter. Astronomers had been hunting for this phantom planet since Uranus was discovered in 1781. Uranus, too, was at just the distance where the law predicted a planet should be.

Nestled between Mars and Jupiter, Ceres was in just the right spot. So astronomers called it a planet. Piazzi initially named the new planet Ceres Ferdinandea after the Roman goddess of the harvest and King Ferdinand IV of Naples and Sicily. Ferdinandea, however, was later dropped.

Ceres's discovery was just the beginning of a landslide of small bodies spotted between Mars and Jupiter. A year after Ceres was discovered, astronomers found another body between the two planets that was almost as bright as Ceres. Heinrich Olbers unexpectedly found the second body, which he called Pallas after Pallas Athena, an alternate name for the goddess Athena.

Many astronomers realized that neither Ceres nor Pallas fit the conventional idea of a planet because their disks were so small they could only be resolved through telescopes. Because of their star-like appearance, Sir William Herschel coined the term "asteroid" for such bodies, writing in 1802: "They resemble small stars so much as hardly to be distinguished from them, even by very good telescopes." Herschel, therefore, argued that Ceres and Pallas were different from other planets.

Most other astronomers, however, disagreed. These two new additions to the solar system were listed with the rest of the planets.

The rush of small bodies continued to pile up. Astronomers nabbed Juno in 1804 and Vesta in 1807. The growing list of small objects raised concern that the asteroids were debris from a planet that had somehow disintegrated. Nevertheless, Juno and Vesta joined Ceres and Pallas as planets.

Astronomers found another body, Astraea, near the end of 1845, almost 39 years after Vesta was spied. Three new objects were spotted in 1847. By the end of 1851, there were 15 known bodies between Mars and Jupiter.

Finally, astronomers realized that this large number of similar bodies all in orbit between Mars and Jupiter represented a new class of solar-system object. They called them asteroids, the name Herschel had coined 50 years earlier. Instead of listing them by distance from the Sun, as they did the planets, astronomers categorized them by their order of discovery. Astronomers today list about 100,000 known asteroids as large as 6 miles (10 kilometers) across located between Mars and Jupiter, a region now called the asteroid belt.

So Pluto's dismissal from the planetary ranks is not unique. Ceres, Vesta, and the other asteroids found in the 1800s, suffered the same indignity. In fact, their stories are similar. Astronomers began to question the planethood of Ceres, Vesta, and the other asteroids as they spotted more objects in the same region. Likewise, Pluto's planetary pedigree was put to the test when astronomers began finding other icy rocks in the planet's neighborhood, a region now called the Kuiper belt. In fact, one of the objects discovered, Eris, is even larger than Pluto. Ceres, Vesta, and Pluto also are among the most massive bodies in their respective regions, the asteroid belt and the Kuiper belt.

The long debate on the definition of a planet is a textbook example of how scientific concepts are not etched in stone but continue to evolve with new discoveries.

With a diameter of about 975x909 km, Ceres is by far the largest and most massive (9.5 x1020 kg) body in the asteroid belt, and contains approximately a third of the mass (0.2 x1021 kg) of all the asteroids in the solar system. However, it is not the largest solar system object besides the Sun, planets, and their moons. Larger bodies have been found in the Kuiper belt including Pluto, 50000 Quaoar, 90482 Orcus, 90377 Sedna, and Eris. Recent observations have revealed that Ceres is nearly spherical in shape, unlike the irregular shapes of smaller bodies with less gravity. Having sufficient mass for self-gravity to overcome rigid body forces is one of the requirements for classification as a planet or dwarf planet.

German mathematician Karl Friedrich Gauss calculated from Piazzi's few observations that Ceres circled around the Sun once every 4.6 years or about 4 years, 220 days. Its true sidereal period is 1679.819 days. Ceres has a very small axial tilt of 4±5 degrees.

Ceres has a very primitive surface and like a young planet, contains water-bearing minerals, and possibly a very weak atmosphere and frost. Infrared observations show that the surface is warm with a possible maximum temperature of 235 K (-38°C). Ceres ranges in its visual brightness magnitude from +6.9 to +9.. At its brightest point it is just barely too dim to be seen with the naked eye.

NASA's Hubble Space Telescope observed that Ceres' surface has a large dark spot as well as a bright spot which are presumed to be crates. A second explanation for the dark spot it that it may be a darker substance in the asteroid's soil. Studies have shown that Ceres probably has a differentiated interior with a rocky core, an icy mantle that is betwee 60 to 120 km thick, and a thin dusty surface.

More will be know about Ceres when the Dawn spacecraft visits the dwarf planet in 2015. The Dawn mission is set for launch in September 2007. It will explore asteroid 4 Vesta in 2011 before arriving at Ceres.

Dwarf Planet Ceres
This photo was taken by the Hubble space telescope on January 24, 2004. It show Ceres a Texas-sized asteroid that was discovered in 1801 by Giuseppe Piazzi. It circles about the sun every 4.6 years and is about 930 kilometers (580 miles) across. It has a very primitive surface, contains water-bearing minerals and possibly a very weak atmosphere. It has a very large spot that likely formed when another asteroid struck Ceres.

The left image is the original picture and the right image has been contrast enhanced. (Copyright 2005 Calvin J. Hamilton)

Images of the Asteroid Ceres As It Rotates One Quarter
NASA's Hubble Space Telescope took these images of the asteroid 1 Ceres over a 2-hour and 20-minute span, the time it takes the Texas-sized object to complete one quarter of a rotation. One day on Ceres lasts 9 hours.

Hubble snapped 267 images of Ceres as it watched the asteroid make more than one rotation. By observing the asteroid during a full rotation, astronomers confirmed that Ceres has a nearly round body like Earth's. Ceres' shape suggests that its interior is layered like those of terrestrial planets such as Earth. Ceres may have a rocky inner core, an icy mantle, and a thin, dusty outer crust inferred from its density and rotation rate.

The bright spot that appears in each image is a mystery. It is brighter than its surroundings. Yet it is still very dark, reflecting only a small portion of the sunlight that shines on it. (Courtesy NASA/ESA/STScI) 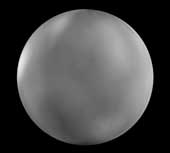 Movie: Hubble Tracks Ceres
The Hubble Space Telescope's Advanced Camera for Surveys studied the asteroid Ceres for a full nine-hour rotational period. The observations represent the most complete view of Ceres, showing that the asteroid has a round shape like Earth and may have a rocky core and a thin crust, also like our planet. Ceres may even have a mantle of water-ice. The features are reflected in this movie of the asteroid's rotational period. (Courtesy NASA/ESA/STScI)

Dwarf Planets
The following images represent the three newly designated dwarf planets. The image of Pluto was rendered from a map created from a servies of Hubble images. Eris is an artistic image, and Ceres is a Hubble telescope image. (Copyright Calvin J. Hamilton)

The colors represent the differences between relatively red and blue regions. These differences may simply be due to variation on the surface among different types of material.

Astronomers enhanced the sharpness in these images to bring out features on Ceres' surface, including brighter and darker regions that could be asteroid impact features. The observations were made in visible and ultraviolet light between December 2003 and January 2004. (Courtesy NASA/ESA/STScI)