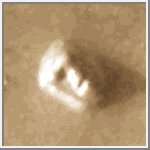 The Face on Mars and other Familiar Features

One of my favorite pastimes as a child, and even occasionally as an adult, was to sit back, look up at the sky, and watch the clouds rolling by. It is quite a game to pick out the shapes of familiar-looking animals and objects in the clouds. Who hasn't heard a child or adult exclaim, "I see a horse, there's an elephant," or "do you see the bird?" We take enjoyment out of creating recognizable-looking features out of clouds and indeed, even in other natural formations in the world around us. Just as we can look at the clouds and identify the familiar, so can we look at features of other worlds and relate them to our own experiences. Even planetary scientists play this game.

One of the most widely recognized features on a world other than our own, is a mesa of resistant rock located in the Cydonia region of Mars. It has a strikingly resemblance to a human face, especially in older images taken by the Viking Orbiters. The Cydonia region is located along an escarpment that separates the relatively crater-free planes to the north from the heavily cratered terrain to the south. JPL scientists made the discovery of the "Face on Mars" in July of 1976 while searching for a landing site for the Viking 2 Lander. Wanting to give the public a familiar looking feature, JPL released the image to the right.

Based upon the low resolution Viking images (which was the best the Viking spacecraft could do), several people claimed that the "Face" was artificial and not a natural geological structure. They also put forth the proposition that other features in the area proved that an intelligent civilization once lived on Mars and created the formations. This became fuel for a small number of conspiracy theorists that asserted that NASA was trying to cover up evidence of ancient intelligent life on other worlds. This argument is preposterous, especially when one considers that NASA has always been faced with budget cuts. The best thing that could happen to NASA would be the discovery of ancient life or technology on another world. This would give them an overwhelming argument in convincing Congress for a large budget increase dedicated to further space exploration. I am not aware of any planetary scientist who believes that these features are anything more than natural formations.One problem with using the Viking images as proof of something is that they are low resolution. At such a resolution the images do not reveal crisp surface features. But a number of laywriters seem to be able to interpret quite a bit from these low resolution images, and some have published books and "supermarket tabloid" reports about their impressions, flawed as they may be. At maximum resolution, the face measures 46 pixels wide and 56 pixels high. The next highest resolution image was approximately 40 pixels wide by 48 pixels high.

Fortunately, on April 6th, 1998 NASA's Mars Global Surveyor spacecraft imaged the Face from a distance of 444 kilometers (276 miles). The image had a resolution of 4.3 meters (15 feet) per pixel, which is ten times sharper than the best Viking image of the region. The face is about a mile across and a few hundred feet high. What some imagined to be eyes, a nose, and lips, now appear to be nothing more than peaks and ridges. Even though the Face has now lost much of its facial appearance, it is still fun to identify features that resemble things that we know. The following are a few other fun familiar-looking features to explore.

Happy Face
The story of the Mars Orbiter Camera (MOC) onboard the Mars Global Surveyor (MGS) spacecraft began with a proposal to NASA in 1985. The first MOC flew on Mars Observer, a spacecraft that was lost before it reached the red planet in 1993. Now, after 14 years of effort, a MOC has finally been placed in the desired mapping orbit. The MOC team's happiness is perhaps best expressed by the planet Mars itself. On the first day of the Mapping Phase of the MGS mission--during the second week of March 1999--MOC was greeted with this view of "Happy Face Crater" (center right) smiling back at the camera from its location on the east side of Argyre Planitia. This crater is officially known as Galle Crater, and it is about 215 kilometers (134 miles) across. The picture was taken by the MOC's red and blue wide angle cameras. The bluish-white tone is caused by wintertime frost. Illumination is from the upper left. (Courtesy Malin Space Science Systems/NASA)

Hot Dog and Butterfly
Some of the pictures returned from Mars by the Mars Orbiter Camera (MOC) onboard the Mars Global Surveyor (MGS) spacecraft show features that--at a glance--resemble familiar, non-geological objects on Earth. For example, the picture at the left shows several low, relatively flat-topped hills (mesas) on the floor of a broad valley among the mountains of the Nereidum Montes region, northeast of Argyre Planitia. One of the mesas seen here looks like half of a butterfly (upper subframe on right). Another hill looks something like a snail or a hot dog wrapped and baked in a croissant roll (lower subframe on right). These mesas were formed by natural processes and are most likely the eroded remnants of a formerly more extensive layer of bedrock. In the frame on the left, illumination is from the upper left and the scene covers an area 2.7 km (1.7 miles) wide by 6.8 km (4.2 miles) high. The "butterfly" is about 800 meters (875 yards) in length and the "hot dog" is about 1 km (0.62 miles) long. (Courtesy Malin Space Science Systems/NASA)

From Mars, With Love
First, Mars seemed to be greeting Mars Global Surveyor (MGS) with a Happy Face. Now, it seems as if the planet is sending its love with the this picture from MGS's Mars Orbiter Camera (MOC).

This valentine from Mars is actually a pit formed by collapse within a straight-walled trough known in geological terms as a graben. Graben are formed along fault lines by expansion of the bedrock terrain. The heart-shaped pit is about 2.3 kilometers (1.4 miles) at its widest. The image was targeted by the MOC team in order to examine the relationship between a lava flow and the graben and pits that disrupted and cut across the flow. The graben, pit, and lava flow are located on the east flank of the Alba Patera volcano in northern Tharsis. The MOC images are illuminated from the left. (Courtesy Malin Space Science Systems/NASA)