Enceladus [en-SELL-ah-dus] is one of the innermost moons of Saturn. It is quite similar in size to Mimas but has a smoother, brighter surface. Enceladus reflects almost 100 percent of the sunlight that strikes it. Unlike Mimas, Enceladus displays at least five different types of terrain. Parts of Enceladus shows craters no larger than 35 km in diameter. Other areas show regions with no craters indicating major resurfacing events in the geologically recent past. There are fissures, plains, corrugated terrain and other crustal deformations. All of this indicates that the interior of the moon may be liquid today, even though it should have frozen aeons ago. It is postulated that Enceladus is heated by a tidal mechanism similar to Jupiter's moon Io. It is perturbed in its orbit by Saturn's gravitational field and by the large neighboring satellites Tethys and Dione. Because Enceladus reflects so much sunlight, the surface temperature is only -201° C (-330° F).

Enceladus
This Voyager 2 mosaic of Enceladus was made from images taken through the clear, violet and green filters on August 25, 1981, from a distance of 119,000 kilometers (74,000 miles). In many ways, the surface of this satellite of Saturn resembles that of Jupiter's Galilean satellite Ganymede. Enceladus, however, is only one-tenth Ganymede's size. Some regions of Enceladus show impact craters up to 35 kilometers (22 miles) in diameter, whereas other areas are smooth and uncratered. Linear sets of grooves tens of kilometers long traverse the surface and are probably faults resulting from deformation of the crust. The uncratered regions are geologically young and suggest that Enceladus has experienced a period of relatively recent internal melting. The rims of several craters near the lower center of the picture have been flooded by the smooth terrain. Features as small as 2 kilometers (1.2 miles) are visible in this highest-resolution view of Enceladus. (Courtesy NASA/JPL) 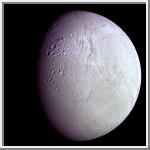 Color Image of Enceladus
This image was created by projecting a digital map of Enceladus onto an orthographic view and then replacing the color channels by low resolution color images. The images were taken on August 25, 1981 by Voyager 2. (Courtesy A. Tayfun Oner) 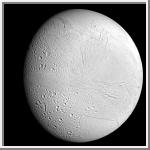 Orthographic Projection of Enceladus
This image was created by projecting a digital map of Enceladus onto an orthographic view. The images used to create the digital map were taken on August 25, 1981 by Voyager 2. (Courtesy A. Tayfun Oner)

Mercator Map of Enceladus
This image is a mercator map of Enceladus. It was made from images taken by the Voyager 2 spacecraft. The map covers the region from -70° to 70° latitude. (Courtesy A. Tayfun Oner) 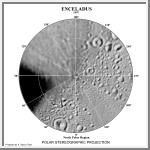