Dione
This image of Dione is a mosaic of several of the highest resolution images taken by the Voyager spacecraft. It shows a heavily cratered surface. The large crater named Aeneas, towards the top of this image, is 150 kilometers (90 miles) in diameter. Another large crater named Dido, towards the bottom, is 125 kilometers (75 miles) in diameter. Bright streaks are found on the opposite side of Dione. A rimmed and flat floored fracture near the terminator is named Latium Chasma. It is greater than 300 kilometers (180 miles) long, less than 1 kilometer (.6 miles) deep and 8 to 12 kilometers (4.8 to 7.2 miles) wide. (Credit: Calvin J. Hamilton)

Color Composite
This image is a color composite of Dione taken by Voyager 1 on November 12, 1980. It was constructed from three separate images taken through orange, green and blue filters. It shows a low resolution view of the trailing hemisphere of Dione. The wispy white streaks are perhaps deposits of snow exuded from fractures in its crust. (Credit: Calvin J. Hamilton)

Wispy White Streaks
This image of Dione was taken by Voyager 1 on November 12, 1980. It shows the Saturn-facing hemisphere. The darker trailing hemisphere is located toward the right limb, with wispy white streaks crisscrossing the surface. The plains terrain is located along the terminator. (Credit: Calvin J. Hamilton)

Mercator of Dione
This image is a mercator map of Dione. It was made from images taken by the Voyager spacecrafts. (Courtesy A.Tayfun Oner) 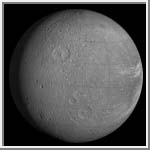 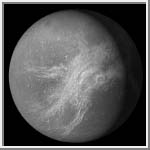