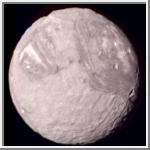 
Miranda [mih-RAN-dah] is not one of the larger satellites of Uranus; however, it was the one that was approached the closest by Voyager 2. This was not the satellite scientists would have chosen to get close to if they had a choice, but they had no choice. Voyager 2 had to fly close to the planet in order to get the boost it needed to go to Neptune. The resolution at which the larger satellites were photographed was around 2 to 3 kilometers (1.2 to 1.9 miles). On the other hand, details on the order of a few hundred meters can be seen on Miranda. Fortunately, Miranda turned out to be the most remarkable of all the satellites. 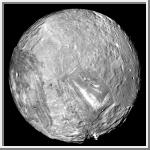 The Chevron
This view of Miranda shows details as small as 600 meters across. It was acquired by Voyager 2 on January 24, 1986. This is a close-up view of the chevron which shows the light and dark grooves with its sharp boundaries. The upper right shows a region of uniformly dark grooved terrain. The area shown is about 150 kilometers (93 miles) on a side. (Credit: Calvin J. Hamilton) 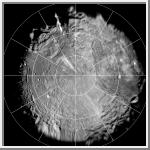 Cylindrical Map of Miranda
This image is a simple cylindrical map projection of Miranda. Zero degrees longitude is at the center and 1 pixel equals 1 kilometer at the equator. (Courtesy A. Tayfun Oner)