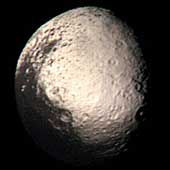 Iapetus [eye-AP-i-tus] is one of the stranger moons of Saturn. Its density is similar to that of Rhea, indicating that it has a small allotment of rocky materials. Its leading side is dark with a slight reddish color while its trailing side is bright. The dark surface might be composed of matter that was either swept up from space or oozed from the moon's interior. The real reason is still unknown. The dark material might be a thin layer of organic material perhaps similar to the complex substances found in the most primitive meteorites. However, there are no bright rimed craters present on the dark hemisphere. If the dark material is thin, it must be constantly renewed since a meteor impact would punch through the layer to reveal brighter surface material.

The dark material may have originated from Phoebe, which has a very low albedo. Micrometeor impacts could kick dark matter off Phoebe which is then swept up by Iapetus. (Phoebe, however, has a slightly different color from that of the dark surface of Iapetus.) The fact that the material is on the leading hemisphere seems to support this theory. On the other hand, the dark material seems to be concentrated in crater floors. This would indicate an internal origin. Since Iapetus is so far from Saturn, it may have formed with methane or ammonia ice in its interior. The dark material could be explained by eruptions of methane from its interior. This theory is supported by a dark ring of material about 100 kilometers (62 miles) in diameter that straddles the border between the leading and trailing hemispheres of Iapetus. Such rings formed on the Moon and on Mars when dark volcanic material flowed into impact craters and filled around the central peak.

Color Image of Iapetus
This color image of Iapetus was created by combining Voyager 2 image data taken through orange, green and blue filters. It was acquired on August 22, 1981. The picture shows a portion of dark material on the left. The satellite's motion is towards the left. (Copyright Calvin J. Hamilton)
Iapetus Animation
This animation of Iapetus was created from 8 pictures taken on August 22, 1981 by the Voyager 2 spacecraft. It is interesting to note the bright mountain peaks, located in the dark material, as they move towards the limb of the satellite. (Copyright Calvin J. Hamilton)

Color Image of Iapetus Taken by Voyager 1
This image of Iapetus was acquired by the Voyager 1 spacecraft on 14 November 1980. The image was created by combining 3 images taken through the orange, green and blue filters of Voyager 1's camera. Voyager 1 did not approach Iapetus as closely as Voyager 2; consequently, the image is of much lower resolution. Despite the low resolution, the image still shows a bright, heavily cratered icy terrain. (Copyright Calvin J. Hamilton) 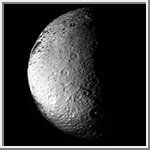 Iapetus
This is another image of Iapetus acquired by the Voyager 2 spacecraft on August 22, 1981. The bright trailing side is prominent in this image. (Copyright Calvin J. Hamilton)

Mercator Map of Iapetus
This image is a mercator map of Iapetus. It was made from images taken by the Voyager 2 spacecraft. The map covers the region from -70° to 70° latitude. (A. Tayfun Oner) 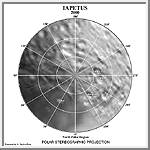 North Polar Map of Iapetus
This image in a north polar stereographic projection map of Iapetus It covers latitudes 65 to 90 degrees and was made from images taken by the Voyager 2 spacecraft. (A. Tayfun Oner)