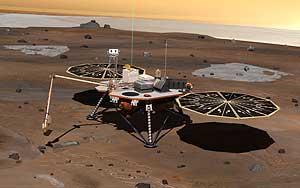 The Phoenix mission has officially ended, its last signal was received on 2 November, 2008.

The Phoenix Mars Lander is designed to study the surface and near-surface environment of a landing site in the high northern area of Mars. The primary science objectives for Phoenix are to: determine polar climate and weather, interaction with the surface, and composition of the lower atmosphere around 70 degrees north for at least 90 sols; determine the atmospheric characteristics during descent through the atmosphere; characterize the geomorphology and active processes shaping the northern plains and the physical properties of the near-surface regolith focusing on the role of water; determine the aqueous mineralogy and chemistry as well as the adsorbed gases and organic content of the regolith; characterize the history of water, ice, and the polar climate and determine the past and present biological potential of the surface and subsurface environments.

The spacecraft comprises an octagonal base supported on three landing legs. Two octagonal solar panel wings extend from the base to provide power. Communication will be primarity through UHF relay via the Mars 2001 Odyssey orbiter, but Mars Reconnaissance Orbiter and Mars Express can also be used as relays, and Phoenix has a steerable medium gain X-band antenna to provide communications directly with Earth.

The science experiments and a robotic arm are mounted on the base. The experiments are: the Microscopy, Electrochemistry, and Conductivity Analyzer (MECA), the Robotic Arm Camera (RAC), the Surface Stereo Imager (SSI), the Thermal and Evolved Gas Analyzer (TEGA), and the meteorological station (MET). Total science payload mass is 55 kg.

Phoenix launched on 4 August 2007 at 9:26:34 UT (5:26 a.m. EDT) on a Delta II 7925 from Cape Canaveral Air Force Station. The 681 million km heliocentric cruise to Mars will take approximately 10 months, with landing on Mars on 25 May 2008. Nominal times are given, these are subject to change by up to about a minute. Fourteen minutes before touchdown, and about 7 minutes before atmospheric entry (defined as reaching an altitude of 125 km) the cruise stage will be jettisoned (23:39 UT, 7:39 p.m. EDT). The spacecraft enters the atmosphere at 23:46:33 UT. A heat shield will initially slow the craft on entry into the martian atmosphere, followed by a parachute (23:50), ejection of the heat shield 15 seconds later, deployment of landing legs 10 seconds after that, and radar activation 50 seconds later. At 1 km altitude (about 23:53) the parachute is released and a powered descent and soft-landing will be achieved using a pulsed propulsion system with 8 thrusters, which turn off when footpad sensors detect touchdown.

Touchdown occurred at 23:53:44 UT (7:53:44 p.m. EDT) on 25 May, 2008. The landing site is in the north polar region between 65 and 72 degrees N, nominally at 68.15 N, 125.9 W, a relatively boulder-free area with a high (30-60%) ratio of ice to rock. Surface temperatures in this region range between about 190 and 260 K and the landing altitude is about 3.5 km below the planetary reference. Mars was 275 million km from Earth at the time of touchdown, a light travel time of about 15 minutes. Communications were maintained through the relays on the orbiting Mars spacecraft Mars Reconnaissance Orbiter and Mars Express throughout the descent and for about 1 minute after touchdown, after which there was no communications with Phoenix for about an hour and a half.

The solar panels were deployed after allowing 15 minutes for the dust to settle. Phoenix then took its first images of itself and its surroundings. When communications resume the first images, along with spacecraft health telemetry, were relayed back to Earth. Landing occured just before the northern summer solstice, at 68 degree latitude the Sun will be in the sky full time and will not dip below the horizon until August.

All instruments will be deployed in the first two days after landing, but there will be an 8 to 10 day "characterization phase" to check out all systems. After this, the first soil sample will be delivered to the TEGA experiment. Surface samples will be analyzed by TEGA and MECA for the next 10 to 15 days and then deeper layers will be explored in 2 to 3 cm increments. Ice is expected to be 2 to 5 cm deep. As the summer ended the mission had less solar energy to operate and made its last transmission on 2 November before power was depleted. Cost of the mission is estimated at $417 million.

Phoenix Lander on Mars
NASA's Phoenix Mars Lander monitors the atmosphere overhead and reaches out to the soil below in this artist's depiction of the spacecraft fully deployed on the surface of Mars.

Phoenix has been assembled and tested for launch in August 2007 from Cape Canaveral Air Force Station, Fla., and for landing in May or June 2008 on an arctic plain of far-northern Mars. The mission responds to evidence returned from NASA's Mars Odyssey orbiter in 2002 indicating that most high-latitude areas on Mars have frozen water mixed with soil within arm's reach of the surface.

Phoenix will use a robotic arm to dig down to the expected icy layer. It will analyze scooped-up samples of the soil and ice for factors that will help scientists evaluate whether the subsurface environment at the site ever was, or may still be, a favorable habitat for microbial life. The instruments on Phoenix will also gather information to advance understanding about the history of the water in the icy layer. A weather station on the lander will conduct the first study Martian arctic weather from ground level.

The vertical green line in this illustration shows how the weather station on Phoenix will use a laser beam from a lidar instrument to monitor dust and clouds in the atmosphere. The dark "wings" to either side of the lander's main body are solar panels for providing electric power. (Courtesy NASA/JPL/UA/Lockheed Martin) 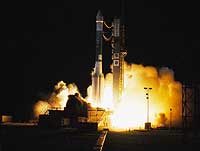 Launch of the Mars Phoenix Lander
The Delta II 7925 rocket carrying NASA's Phoenix Mars lander thunders to life at 5:26 a.m. EDT at Pad 17A on Cape Canaveral Air Force Station. Phoenix will land in icy soils near the north polar, permanent ice cap of Mars and explore the history of the water in these soils and any associated rocks, while monitoring polar climate. Landing on Mars is planned in May 2008 on arctic ground where a mission currently in orbit, Mars Odyssey, has detected high concentrations of ice just beneath the top layer of soil. (Courtesy NASA)

Launch of the Mars Phoenix Lander
NASA's Phoenix Mars lander illuminates Launch Pad 17A as it lifts off aboard a Delta II 7925 rocket at 5:26 a.m. EDT from Cape Canaveral Air Force Station. Phoenix will land in icy soils near the north polar, permanent ice cap of Mars and explore the history of the water in these soils and any associated rocks, while monitoring polar climate. Landing on Mars is planned in May 2008 on arctic ground where a mission currently in orbit, Mars Odyssey, has detected high concentrations of ice just beneath the top layer of soil. (Courtesy NASA)

Phoenix Twilight (Artist Concept)
In this artist's concept illustration, NASA's Phoenix Mars Lander begins to shut down operations as winter sets in. The far-northern latitudes on Mars experience no sunlight during winter. This will mark the end of the mission because the solar panels can no longer charge the batteries on the lander. Frost covering the region as the atmosphere cools will bury the lander in ice. (Courtesy NASA/JPL-Calech/University of Arizona) 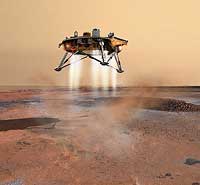 Powered Landing of Phoenix (Artist Concept)
This artist's concept depicts NASA's Phoenix Mars Lander a moment before its 2008 touchdown on the arctic plains of Mars. Pulsed rocket engines control the spacecraft's speed during the final seconds of descent. (Courtesy NASA/JPL-Calech/University of Arizona)