Craters formed on this object by impacts appear to be covered by debris, a process that probably happens rapidly in a geologic sense. The grooves and small ridges on Pandora (84 kilometers, or 52 miles across) suggest that fractures affect the overlying smooth material.

The crisp craters on another Saturn moon, Hyperion, provide a contrasting example of craters on a small object (see PIA07740).

Cassini acquired infrared, green and ultraviolet images on Sept. 5, 2005, which were combined to create this false-color view. The image was taken with the Cassini spacecraft narrow-angle camera at a distance of approximately 52,000 kilometers (32,000 miles) from Pandora and at a Sun-Pandora-spacecraft, or phase, angle of 54 degrees. Resolution in the original image was about 300 meters (1,000 feet) per pixel. The image has been magnified by a factor of two to aid visibility. (Courtesy NASA/JPL/Space Science Institute) 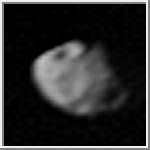