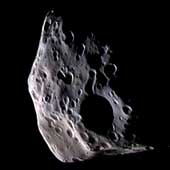 Epimetheus: Up-Close and Colorful
With this false-color view, Cassini presents the closest look yet at Saturn's small moon Epimetheus (epp-ee-MEE-thee-uss).

The color of Epimetheus in this view appears to vary in a non-uniform way across the different facets of the moon's irregular surface. Usually, color differences among planetary terrains identify regional variations in the chemical composition of surface materials. However, surface color variations can also be caused by wavelength-dependent differences in the way a particular material reflects light at different lighting angles. The color variation in this false-color view suggests such "photometric effects" because the surface appears to have a more bluish cast in areas where sunlight strikes the surface at greater angles.

This false color view combines images obtained using filters sensitive to ultraviolet, polarized green and infrared light. The images were taken at a Sun-Epimetheus-spacecraft, or phase, angle of 115 degrees, thus part of the moon is in shadow to the right. This view shows an area seen only very obliquely by NASA's Voyager spacecraft. The scene has been rotated so that north on Epimetheus is up.

The slightly reddish feature in the lower left is a crater named Pollux. The large crater just below center is Hilairea, which has a diameter of about 33 kilometers (21 miles).

At 116 kilometers (72 miles) across, Epimetheus is slightly smaller than its companion moon, Janus (181 kilometers, or 113 miles across), which orbits at essentially the same distance from Saturn.

The images for this color composite were obtained with the Cassini spacecraft narrow-angle camera on March 30, 2005, at a distance of approximately 74,600 kilometers (46,350 miles) from Epimetheus. Resolution in the original images was about 450 meters (1,480 feet) per pixel. This view has been magnified by a factor of two to aid visibility. (Courtesy NASA/JPL/Space Science Institute) 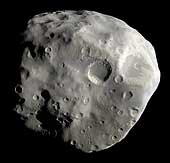 The view shows what might be the remains of a large impact crater covering most of this face, and which could be responsible for the somewhat flattened shape of the southern part of Epimetheus (116 kilometers, or 72 miles across) seen previously at much lower resolution.

The image also shows two terrain types: darker, smoother areas, and brighter, slightly more yellowish, fractured terrain. One interpretation of this image is that the darker material evidently moves down slopes, and probably has a lower ice content than the brighter material, which appears more like "bedrock." Nonetheless, materials in both terrains are likely to be rich in water ice.

The images that were used to create this enhanced color view were taken with the Cassini spacecraft narrow-angle camera on Dec. 3, 2007. The views were obtained at a distance of approximately 37,400 kilometers (23,000 miles) from Epimetheus and at a Sun-Epimetheus-spacecraft, or phase, angle of 65 degrees. Image scale is 224 meters (735 feet) per pixel. (Courtesy NASA/JPL/Space Science Institute) 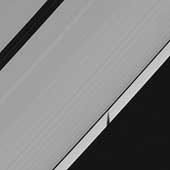 
The beauty and spectacle of celestial motion is captured in this short movie of a moon shadow darting across Saturn's rings.

Over the span of about an hour, Cassini's camera tracked the shadow of the small moon Epimetheus, orbiting beyond the rings, as it moved across Saturn's A ring in this movie made up of 21 images.

As Saturn approaches equinox, the angle at which the ringplane is inclined away from the sun will continue to decrease until August 2009, when equinox will bring about an alignment of the plane containing the rings with the rays of the sun. Only around the time of equinox is a moon's shadow cast on the rings rather than the planet. Between now and equinox in August, the shadows cast by the moons on the rings will grow longer with time. (Courtesy NASA/JPL/Space Science Institute) 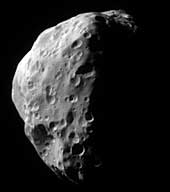 Looking Down on Epimetheus
From 34 degrees above Saturn's equatorial plane, Cassini gazed down at Saturn's moon Epimetheus. The region seen here includes territory farther north and east than that imaged in March 2005 (above).

The two largest craters visible here are the only officially named features on Epimetheus. The crater at the left (at about the 9 o'clock position) is named Pollux; the crater at lower left (containing a string of several smaller craters) is called Hilairea. Epimetheus is 116 kilometers (72 miles) across.

The image was taken in visible light with the Cassini spacecraft narrow-angle camera on July 14, 2005, at a distance of approximately 87,000 kilometers (54,000 miles) from Epimetheus and at a Sun-Epimetheus-spacecraft, or phase, angle of 95 degrees. The image scale is 520 meters (1,710 feet) per pixel. (Courtesy NASA/JPL/Space Science Institute) 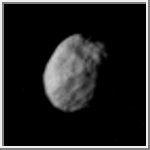 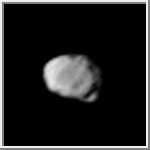