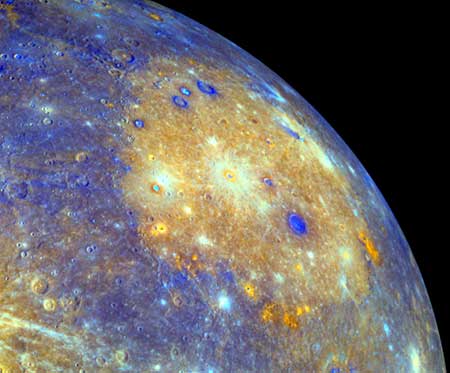 Scientists have argued about the origins of Mercury's smooth plains and the source of its magnetic field for more than 30 years. Now, analyses of data from the January 2008 flyby of the planet by the Mercury Surface, Space Environment, Geochemistry and Ranging (MESSENGER) spacecraft have shown that volcanoes were involved in plains formation and suggest that its magnetic field is actively produced in the planet's core.

Scientists additionally took their first look at the chemical composition of the planet's surface. The tiny craft probed the composition of Mercury's thin atmosphere, sampled charged particles (ions) near the planet, and demonstrated new links between both sets of observations and materials on Mercury's surface. The results are reported in a series of 11 papers published in a special section of Science magazine July 4.

The controversy over the origin of Mercury's smooth plains began with the 1972 Apollo 16 moon mission, which suggested that some lunar plains came from material that was ejected by large impacts and then formed smooth "ponds." When Mariner 10 imaged similar formations on Mercury in 1975, some scientists believed that the same processes were at work. Others thought Mercury's plains material came from erupted lavas, but the absence of volcanic vents or other volcanic features in images from that mission prevented a consensus.

Six of the papers in Science report on analyses of the planet's surface through its reflectance and color variation, surface chemistry, high-resolution imaging at different wavelengths, and altitude measurements. The researchers found evidence of volcanic vents along the margins of the Caloris basin, one of the solar system's youngest impact basins. They also found that Caloris has a much more complicated geologic history than previously believed.

The first altitude measurements from any spacecraft at Mercury also found that craters on the planet are about a factor of two shallower than those on Earth's moon. The measurements also show a complex geologic history for Mercury.

Mercury's core makes up at least 60 percent of its mass, a figure twice as large as any other known terrestrial planet. The flyby revealed that the magnetic field, originating in the outer core and powered by core cooling, drives very dynamic and complex interactions among the planet's interior, surface, exosphere and magnetosphere.

Remarking on the importance of the core to surface geological structures, Principal Investigator Sean Solomon at the Carnegie Institution of Washington said, "The dominant tectonic landforms on Mercury, including areas imaged for the first time by MESSENGER, are features called lobate scarps, huge cliffs that mark the tops of crustal faults that formed during the contraction of the surrounding area. They tell us how important the cooling core has been to the evolution of the surface. After the end of the period of heavy bombardment, cooling of the planet's core not only fueled the magnetic dynamo, it also led to contraction of the entire planet. And the data from the flyby indicate that the total contraction is a least one-third greater than we previously thought."

The flyby also made the first-ever observations of the ionized particles in Mercury's unique exosphere. The exosphere is an ultrathin atmosphere in which the molecules are so far apart they are more likely to collide with the surface than with each other. The planet's highly elliptical orbit, its slow rotation and particle interactions with the magnetosphere, interplanetary medium and solar wind result in strong seasonal and day-night differences in the way particles behave.