On February 14, 2000 at 10:33 AM EST the NEAR spacecraft was successfully inserted into orbit around 433 Eros, becoming the first artificial satellite of an asteroid. Just over an hour later, NEAR pointed its camera at the asteroid and took the above picture from a range of 210 miles (330 km) above the surface.

NEAR was launched on February 17, 1996 as the first of NASA's Discovery missions to rendezvous with asteroid 433 Eros. During the journey to Eros, NEAR flew within 1212 kilometers (750 miles) of asteroid Mathilde on June 27, 1997. NEAR was to continue onto Eros and obtain orbit in December of 1998; however, due to a computer glitch the rendezvous burn of NEAR's bipropellant engine was aborted. This failure caused NEAR to fly past the asteroid on December 23, 1998. Mission operators quickly reprogrammed the spacecraft to obtain scientific flyby information and to put the spacecraft into an orbit that would eventually reach Eros in February 2000.

Eros is approximately 33x13x13 kilometers (20x8x8 miles) in size and resembles a "fat banana." It is the second largest near-Earth asteroid and spins on its axis once every 5 hours, 16 minutes. Eros exhibits a heavily cratered surface with one side dominated by a huge, scallop-rimmed gouge, and the opposite side by a conspicuous sharp, raised rimmed crater.

Eros Rotation Movie
On February 10, four days before NEAR's insertion into orbit around Eros, the spacecraft's Multispectral Imager took this movie of the asteroid's rotation over one 5.27-hour Eros "day", from a range of 2050 miles (3300 kilometers).

Features as small as a 1100 feet (330 meters) across can be seen. The most prominent, sharp-rimmed impact crater is on the opposite side of Eros form a huge, hollowed-out gouge, which may also have been caused by an impact. Between these features, and towards the ends of the "fat banana" shape of Eros, the asteroid's surface is covered with smaller craters. (Courtesy NASA/JHU-APL)

Map of Eros
This image is a shaded relief map of asteroid Eros in simple cylindrical projection. It was created from laser altimetry data. The feature names are IAU approved. North latitude is at the top with zero longitude at the left edge. (Courtesy of Grant L. Hutchison)

Eros in Color
This color image of Eros was acquired at a range of 1100 miles (1800 kilometers). It is part of the final approach imaging sequence prior to orbit insertion and is intended to map the color properties of Eros across all of the illuminated surface. The image shows approximately the color that Eros would appear to the unaided human eye. Its subtle butterscotch hue is typical of a wide variety of minerals thought to be the major components of asteroids like Eros. (Courtesy of NASA/JHU-APL)

Eros, in Stereo
Stereo imaging will be an important tool on NEAR for geologic analysis of Eros, because it provides three-dimensional information on the asteroid's landforms and structures. This anaglyph can be viewed using red-blue glasses to show Eros in stereo. It was constructed from images taken on February 14 and 15 that showed the same part of Eros from two slightly different viewing perspectives. The smallest feature visible is 100 feet (30 meters) across. (Courtesy of NASA/JHU-APL)

Eros Image Mosaic, Looking North
This image mosaic of Eros was taken by the NEAR spacecraft on February 18, 2000 from a range of 224 miles (361 kilometers). The smallest detail visible on the surface is about 115 feet (35 meters) across. At the time the spacecraft was over the shadowed southern hemisphere, looking north at a crescent Eros. (Courtesy of NASA/JHU-APL)

Eros's Eastern and Western Hemispheres
On February 23, 2000, the NEAR spacecraft obtained a sequence of image mosaics showing Eros' surface as the asteroid rotated under the spacecraft. At that time the range to the surface was approximately 355 kilometers (220 miles). These two mosaics, part of that sequence, show the stark beauty of the two opposite hemispheres. The smallest detail visible is 35 meters (120 feet) across. The top mosaic shows wavy brightness banding exposed in the interior walls of the saddle. In the bottom mosaic, similar banding is visible in one of the craters near the limb at left. To the right, the angle of the illumination accentuates the quasi-linear troughs near the terminator. (Courtesy of NASA/JHU-APL) 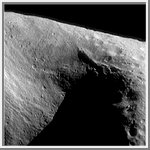 Interesting Structural Features on Eros
This image of the interior of Eros' saddle area, taken at a range of 204 km (127 miles), displays a paucity of craters compared to the surface on the right hand side of the image. The saddle displays many interesting structural features. Visible on the left wall are a series of closely spaced grooves that follow the terrain downslope. Opposite, on the upper right wall, trending towards the back of the saddle is a prominent ridge. Boulders are visible throughout this image. Features as small as 20 meters (65 feet) are discernable in this image. (Courtesy of NASA/JHU-APL) 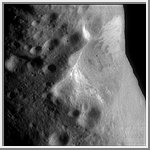 Oblique View of Eros' Crater
This image, showing an oblique view of Eros' large central crater, was taken at a resolution of about 20 meters (65 feet) per pixel. The brightness or albedo patterns on the walls of this crater are clearly visible, with the brighter materials near the tops of the walls and darker materials on the lower walls. Boulders are seen inside this crater and the smaller nearby craters. The higher density of craters to the left of the large crater implies that this region is older than the smoother area seen associated with the saddle region on the opposite side of the asteroid. (Courtesy of NASA/JHU-APL)

NEAR's First Whole-Eros Mosaic from Orbit
This picture of Eros, the first of an asteroid taken from an orbiting spacecraft, is a mosaic of four images obtained by NEAR on February 14, 2000, immediately after the spacecraft's insertion into orbit. We are looking down over the north pole of Eros at one of the largest craters on the surface, which measures 4 miles (6 kilometers) across. Inside the crater walls are subtle variations in brightness that hint at some layering of the rock in which the crater formed. Narrow grooves that run parallel to the long axis of Eros cut through the southeastern part of the crater rim. A house-sized boulder is present near the floor of the crater; it appears to have rolled down the bowl-shaped crater wall. A large number of boulders is also present on other parts of the asteroid's surface. The surface of the asteroid is heavily cratered, indicating that Eros is relatively old. (Courtesy of NASA/JHU-APL)

Inside Eros' Giant Gouge
This picture was taken from NEAR on February 15, 2000, while the spacecraft was passing directly over the large gouge that creates Eros's characteristic peanut shape. It is a mosaic of individual images showing features as small as 120 feet (35 meters) across. Although most of the asteroid is in shadow, we are able to see inside the gouge. Many narrow parallel troughs closely follow the shape of the gouge. Although they appear curvilinear from this view, they are most likely oriented parallel to the length of the asteroid. The strong lighting contrast along the terminator (the line separating day from night on Eros) makes it easy to see that most of the surface is saturated with impact craters. Inside the gouge, however, only smaller craters are present, indicating that the area within the gouge is younger than the surface along the terminator. This implies that the event that caused the gouge must have happened more recently than the formation of the rest of the surface of Eros. (Courtesy of NASA/JHU-APL)

Over Eros' Horizon
This incredible picture of Eros, taken on February 14, 2000, shows the view looking from one end of the asteroid across the gouge on its underside and toward the opposite end. In this mosaic, constructed from two images taken after the NEAR spacecraft was inserted into orbit, features as small as 120 feet (35 meters) across can be seen. House-sized boulders are present in several places; one lies on the edge of the giant crater separating the two ends of the asteroid. A bright patch is visible on the asteroid in the top left-hand part of this image, and shallow troughs can be see just below this patch. The troughs run parallel to the asteroid's long dimension. (Courtesy of NASA/JHU-APL)

During the early stages of NEAR's approach, Eros appeared as a small blob only a few pixels across. The apparent size of Eros and the resolution of the pictures increased continuously, at first only slowly and later dramatically day by day until, on February 9, the level of detail visible exceeded that during NEAR's first flyby of Eros on December 23, 1998. In the last images shown here, details of Eros's surface have become visible. Heavy cratering has pockmarked the irregular asteroid's surface. One side is dominated by a scallop-rimmed gouge, and the opposite side by a conspicuous, raised-rimmed crater. (Courtesy NASA/JHU-APL)