Ranger 7 was designed to achieve a lunar impact trajectory and to transmit high-resolution photographs of the lunar surface during the final minutes of flight. The spacecraft carried six television cameras, an optical earth sensor and high-gain antenna for optimum communications, and solar panels to provide power (as well as additional engineering equipment). The telecommunications equipment converted the composite video signal from the camera transmitters into an RF signal for subsequent transmission through the spacecraft high-gain antenna. Sufficient video bandwidth was provided to allow for rapid framing sequences of both narrow- and wide-angle television pictures. The spacecraft encountered the lunar surface in direct motion along a hyperbolic trajectory, with an incoming asymptotic direction at an angle of -5.57 degrees from the lunar equator. The orbit plane was inclined 26.84 degrees to the lunar equator. After 68.6 hours of flight, impact occurred in an area between Mare Nubium and Oceanus Procellarum (subsequently named Mare Cognitum). Velocity at impact was 2.62 km/sec (1.62 miles per second). The spacecraft performance was excellent. Transmission of over 4,300 photographs occurred during the final 17 minutes of flight, from 1308 UT to 1325 UT on July 31, 1964.

The television system consisted of a six slow-scan vidicon TV cameras capable of transmitting high-resolution, close-up television pictures of the lunar surface during the final minutes of flight before the spacecraft impacted the lunar surface. These photographs provided large-scale topographic information needed for the Surveyor and Apollo projects. Vidicons 2.54 centimeters in diameter with an antimony-sulfide oxy-sulfide (ASOS) photoconductor target were used for image sensing in all six cameras.

There were two camera channels which had independent power distribution networks so that the greatest reliability and probability of obtaining highest quality video pictures would be afforded. The first channel had two full-scan cameras, one wide angle (25-degree field of view and 25-millimeter focal length) designated the A-camera and one narrow angle (8.4 degree field of view and 76-millimeter focal length) B-camera. These cameras utilized an active image area of 11 square millimeter that contained 1150 lines and was scanned in 2.5 seconds. Scan and erase cycles were designed to act alternately resulting in intervals of 5 seconds between consecutive pictures on a particular camera. The other channel had four partial-scan p-cameras, two narrow angle and two wide angle. The image area of these four cameras was 2.8 square millimeters which contained 300 lines and was scanned in 0.2 seconds. The instrument allowed for camera fields of view, ranging from 25 degrees to 2.1 degrees, to overlap and produce a 'nesting' sequence of pictures. The video transmissions were recorded on both kinoscope film recorders and magnetic tape recorders. A cathode-ray tube reconstructed the original image, which was then photographed on 35-millimeter film.

The full-scan camera system began transmitting pictures at 1308 UT on July 31, 1964, 17 minutes, 13 seconds prior to impact. The partial-scan system initiated transmission of pictures at 1312 UT, 13 minutes, 40 seconds prior to impact. The last full-scan transmission occured between 2.5 and 5 seconds before impact, while the last partial-scan picture was taken between 0.2 and 0.4 seconds before impact and achieved resolution to 0.5 meters (1.64 feet). Image motion is more severe in the last pictures. The experiment returned 4,308 photographs of excellent quality.

Images of the Moon from Ranger 7

First image of the Moon taken by a U.S. spacecraft
This is the first image of the Moon taken by the Ranger 7 spacecraft on 31 July 1964 at 13:09 UT (9:09 AM EDT) about 17 minutes before impacting the lunar surface. The area photographed is centered at 13° S, 10° W and covers about 360 km from top to bottom. The large crater at center right is the 108 km diameter Alphonsus. Above it is Ptolemaeus and below it Arzachel. The terminator is at the bottom right corner. Mare Nubium is at center and left. North is at about 11:00 at the center of the frame. The Ranger 7 impact site is off the frame, to the left of the upper left corner. (Courtesy NASA) 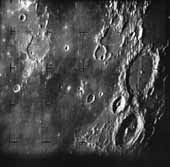 Second image of the Moon's surface taken by a U.S. Spacecraft
This is the second image of the Moon taken by the Ranger 7 spacecraff. Ranger 7 was the first U.S. spacecraft to successfully transmit images of the lunar surface back to Earth. The image was taken 17.2 minutes before impact from a distance of 2158 km. North is at 12:30. Mare Nubium is at lower right and Mare Humorum at lower left. The image is centered at 13° S, 330° E and is about 950 km across. The Ranger 7 impact site, at 10.7° S, 339.3° E, is at the center of the upper right quadrant, in Mare Cognitum. Landsberg crater is against the top of the frame at center, and the 60 km diameter Bullialdus crater is just below and right of center, partly obscured by a hash mark. (Courtesy NASA)

Lubiniezky and Bullialdus craters from 1170 km
This Ranger 7 image of Mare Nubium was taken 8.5 minutes before impact from 1170 km. The 60 km diameter Bullialdus crater is at the bottom center, and the 43 km Lubiniezky is just above it to the left. The small crater below and right of the central reticle is Darney. The Fra Mauro region is in the upper right corner and Montes Riphaeus, with white arcs, is near the top center of the image. The impact point is midway between the reticle right of the center and the one above it. North is up. (Courtesy NASA)

Floor of Mare Nubium 2 1/2 seconds before impact
This final Ranger 7 (A-camera) image was taken 2.5 seconds before impact at 10.59° S, 20.68° W from a distance of 6.5 km. The frame is about 2.7 km across and north is up. The impact point is just above and right of the central reticle. At this high resolution (about 5 meters) the flat floor of Mare Nubium was shown to be peppered with small impact craters. (Courtesy NASA) 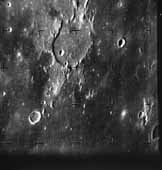 Floor of Mare Nubium on the Moon from 15 km
This Ranger 7 (camera-B) image was taken 5 seconds before impact on 31 July 1964 from a distance of 14.71 km and shows the floor of Mare Nubium. The frame is about 2.8 km across and shows features as small as approximately 5 meters. The impact site is off this image to the upper left. (Courtesy NASA)

First Ranger 7 (P-camera) images of the Moon
These are the first P-camera images taken by Ranger 7. The images are numbered by camera (clockwise from upper left) P3, P4, P2, P1. All images were taken from a distance of 1870 km, about 13.5 minutes before impact. Frame P3 shows Guericke crater (diameter 63 km) at the upper right. P4 also shows Guericke at right center. Image P1 is 41 km across and shows the floor of Mare Nubium north of Opelt crater. The bottom of frame P2 overlaps the upper right corner of P1. P2 is about 40 km across. North is at 12:30 in all four images. (Courtesy NASA)

Four views of the same area of Mare Nubium on the Moon from 250 km
These four Ranger 7 P-camera images show part of the floor of Mare Nubium near the impact site. The images are ordered by camera (clockwise from upper left) P3, P4, P2, P1. The images were taken from 250 km about 90 seconds before impact. Images P3 and P4 are about 15 km across. Image P1 overlaps the lower left corner of P4, and the bottom of P2 overlaps the top of P1. Frames P1 and P2 are about 5.5 km across. North is at 12:30. (Courtesy NASA)

Last Ranger 7 images taken before impact on the Moon
These are the final two images taken by Ranger 7 before its impact on the Moon's surface. They were taken by the number 1 and 3 P-channel cameras at 0.39 and 0.19 s before impact from an altitude of 1070 and 519 meters, respectively. The pictures are cut off because the spacecraft impacted the surface before completing the transmission. The top image was taken by the P3 camera and the bottom image by P1. The P3 image is about 25 m across. North is at 12:30 for both images. The impact occurred on 31 July 1964 at 13:25:48.82 UT. (Courtesy NASA)

Ranger to the Moon