Views of Ida and Dactyl 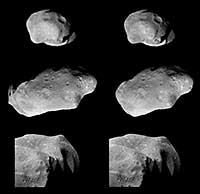 
Additional Images of Ida and Dactyl