Titan [TY-tun] is the largest moon of Saturn and the second largest moon in the solar system, rivaled only by Jupiter's moon Ganymede. Before the Voyager encounters, astronomers suspected that Titan might have an atmosphere. Scientists also believed they might find liquid seas or pools of methane or ethane; water would be frozen due to Titan's low surface temperature. Expecting an unusual world, Voyager 1 was programmed to take numerous close up views of Titan as it flew past in November of 1980. Unfortunately, all that was revealed was an impenetrable layer of atmosphere and clouds. Only slight color and brightness variations were observed.

Although Titan is classified as a moon, it is larger than the planets Mercury and Pluto. It has a planet-like atmosphere which is more dense than those of Mercury, Earth, Mars and Pluto. The atmospheric pressure near the surface is about 1.6 bars, 60 percent greater than Earth's. Titan's air is predominantly made up of nitrogen with other hydrocarbon elements which give Titan its orange hue. These hydrocarbon rich elements are the building blocks for amino acids necessary for the formation of life. Scientists believe that Titan's environment may be similar to that of the Earth's before life began putting oxygen into the atmosphere.

Titan's surface temperature appears to be about -178°C (-289°F). Methane appears to be below its saturation pressure near Titan's surface; rivers and lakes of methane probably don't exist, in spite of the tantalizing analogy to water on Earth. On the other hand, scientists believe lakes of ethane exist that contain dissolved methane. Titan's methane, through continuing photochemistry, is converted to ethane, acetylene, ethylene, and (when combined with nitrogen) hydrogen cyanide. The last is an especially important molecule; it is a building block of amino acids.

The Voyager spacecrafts were not able to penetrate the thick layers of clouds but they did reveal that Titan is one of the more interesting places in the solar system. What kind of landscape lies below the layers of clouds? What mysteries are held beneath these orange curtains? These questions will have to wait until future spacecraft are launched to visit this unusual moon. On October 15, 1997, the Cassini spacecraft was launched for a rendezvous with Saturn in June 2004. Later that year, it will release the European-built Huygens probe for a descent through Titan's atmosphere. Cassini will have more than 30 encounters with Titan, mapping the moon's surface with a synthetic aperature radar similar to the one Magellan used to map Venus. 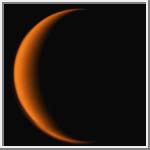 Titan Looking Back
This view of Titan was taken from a position looking almost directly back toward the Sun. Titan's hydrocarbon-rich nitrogen atmosphere scatters sunlight in a forward direction over the limb around the entire disk. The surface of Titan is obscured by a deep cloud layer. The only visible markings are the dark north polar hood and a difference in the brightness and color in the north and south hemispheres. (Courtesy NASA/JPL)

Pioneer 11 Image of Titan
This image of Titan was taken by the Pioneer 11 spacecraft on September 3, 1979 from a range of 3.6 million km. It was constructed from the red and blue channel data of image G-14. The quality is limited due the limited quality of the Pioneer imaging system as well as poor telecomunications at the time of the Titan encounter. This is the first image of Titan to clearly show one hemisphere brighter than the other. (Courtesy NASA)

Mercator Map Of Titan
For the first time scientists have made images of the surface of Titan. They mapped light and dark features over the surface of the satellite during nearly a complete 16-day rotation. One prominent bright area they discovered is a surface feature 2,500 miles across, about the size of the continent of Australia. This view of Titan is a Mercator projection with latitude ranging from 40° south to 50° north and longitude ranging from 0° to 360° (E longitude increasing to the right). This image was constructed from images taken by the Hubble Space Telescope during 14 observing runs between October 4 - 18, 1994. The WideField/Planetary Camera 2 was used at near-infrared wavelengths (between .85 and 1.05 microns). Titan's haze is transparent enough in this wavelength range to allow mapping of surface features according to their reflectivity. (Courtesy Peter Smith, University of Arizona/NASA)

Four Views of Titan
This image shows four views of Titan by mapping the Mercator Map onto a globe at four different orientations. (Courtesy Peter Smith, University of Arizona/NASA)

Huygens
This artist's rendering shows the European Space Agency's Huygens probe descending into the atmosphere of Saturn's moon Titan after being released by NASA's Cassini spacecraft. Cassini was launched on October 15, 1997 and will reach Saturn in June 2004. It will release the Huygens probe later that year. (Courtesy ESA)

Huygens on Titan's Surface
This artist's rendering shows the Huygens probe on the surface of Saturn's moon Titan after being released by NASA's Cassini spacecraft. (Courtesy ESA)