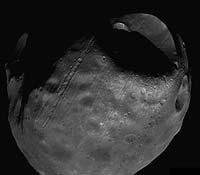 Phobos [FOH-bohs] (fear) is a moon of Mars and was named after an attendant of the Roman war god Mars. Phobos is a dark body that appears to be composed of C-type surface materials. It is similar to the C-type (blackish carbonaceous chondrite) asteroids that exist in the outer asteroid belt. Some scientists speculate that Phobos and Mars' other moon, Deimos, are captured asteroids. However, other scientists point to evidence that contradicts this theory. Phobos shows striated patterns which are probably cracks caused by the impact event of the largest crater on the moon.

High Resolution Mosaic of Phobos
This high-resolution mosaic of Phobos was created from three Viking orbiter images. The striking feature in this image is the giant Stickney crater. Grooved fractures caused from the impact that created Stickney extend away from the crater. (Copyright © 1997 by Calvin J. Hamilton)

Six Views of Phobos
This picture shows six different orientations of Phobos. The images were rendered by using Peter C. Thomas' model and the USGS airbrush map of Phobos. (Courtesy A. Tayfun Oner)

Phobos 2 VSK image of the Martian Moon Phobos
This image was taken by the VSK instrument on the USSR Phobos 2 spacecraft in March of 1989 shortly before the spacecraft failed. It is made from blue and red images superimposed on a broadband high resolution image. The color is as true as can be with no real green image, although color variations are exagerated. From the VSK data, this is perhaps the prettiest color picture. (Courtesy Ted Stryk) 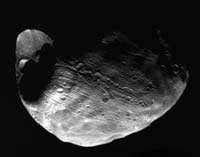 Stickney Crater
One of the most striking features of Phobos, aside from its irregular shape, is its giant crater Stickney. Because Phobos is only 28 by 20 kilometers (17 by 12 miles), the moon must have been nearly shattered from the force of the impact that caused the giant crater. Grooves that extend across the surface from Stickney appear to be surface fractures caused by the impact. Near the crater, the grooves measure about 700 meters (2300 feet) across and 90 meters (295 feet) deep. However, most of the grooves have widths and depths in the 100 to 200 meters (328 to 655 feet) and 10 to 20 meters (33 to 65 feet) ranges, respectively. (Courtesy NASA)

Topographic Map of Phobos
This is a topographic map of Phobos. It is based upon the shape model of Phil Stooke. As with all maps, it is the cartographer's interpretation; not all features are necessarily certain given the limited data available. This interpretation stretches the data as far as possible. (Courtesy A. Tayfun Oner) 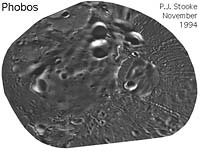