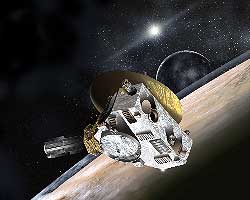 New Horizons launched at 19:00 UT (2:00 p.m. EST) on 19 January 2006 on an Atlas V 551 booster with a Star 48B third stage directly into an interplanetary trajectory. It passed within 101,867 km of main belt asteroid JF56 on 13 June 2006. It used the encounter as a test of its instruments and tracking and navigation sensors, and returned images of the 2.5 km diameter asteroid, which only shows as a faint dot at that distance. It will reach Jupiter for a gravity assist on 28 February 2007. The flyby will come within about 32 Jovian radii of Jupiter at 21 km/s and will be the center of a 4 month intensive Jupiter system observation campaign. The flyby will put the spacecraft on a trajectory towards Pluto, about 2.5 degrees out of the plane of the solar system. During cruise to Pluto New Horizons may be targeted to fly by a Centaur object (an escaped Kuiper Belt Body) if a suitable target can be identified.

Flyby of Pluto will occur nominally on 14 July 2015. The encounter period begins 6 months prior to closest approach. Long range imaging will include 40 km mapping of Pluto and Charon 3.2 days out. This is half the rotation period of Pluto-Charon and will allow imaging of the side of both bodies which will be facing away from the spacecraft at closest approach. New Horizons will fly within 10000 km of Pluto at a relative velocity of 11 km/s at closest approach and will come as close as 27,000 km to Charon. During the flyby the instruments should be able to obtain images with resolution as high as 25 m/pixel, 4-color global dayside maps at 0.7 km/pixel, hyper-spectral near infrared maps at 7 km/pixel globally and 0.6 km/pixel for selected areas, characterization of the atmosphere, and radio science results. Because of the limited power available, the instruments will be duty cycled during encounter. The flyby will take place at a distance of about 33 AU from Earth with a round-trip light time of 9 hours. Encounter data will be transmitted to Earth at 600 bps over a 9-month period. After passing by Pluto, New Horizons will be headed out to the Kuiper Belt where one to three Kuiper Belt Objects with diameters exceeding 35 km are expected to be targeted for encounter and similar measurements to those made at Pluto. This phase of the mission will last from 5 to 10 years.

The spacecraft has the shape of a thick triangle (0.68 x 2.11 x 2.74 m) with a cylindrical radiothermal generator (RTG) protruding from one vertex in the plane of the triangle and a 2.1 m high-gain radio dish antenna affixed to one flank side. An aluminum central cylinder supports surrounding honeycomb panels. The central cylinder acts as the payload adapter fitting and houses the propellant tank. The 465 kg launch mass includes 80 kg of propellant. The entire structure is covered in thermal multi-layer insulating blankets and thermal control is further achieved by electrical dissipation and RTG waste heat, thermal louvers, and external shunt plates. Communication from Pluto will be via X-band at a rate of 600 bps through the high gain antenna to a 70-m DSN dish. There are also two low gain antennas for communications within 5 AU and a medium gain antenna with uplink capability to 50 AU. The RTG will provide approximately 228 W at encounter in 2015. Hydrazine monopropellant is used for propulsion via four 4.4 N thrusters and twelve 0.8 N thrusters, a delta-V capability of 290 m/s will be available after launch. The hydrazine is stored in a titanium tank separated from the gaseous nitrogen pressurant by a girth-mounted diaphragm. The spacecraft has both 3-axis stabilized and spin-stabilized modes. Star cameras are mounted on the side of the spacecraft for navigation.

The 31 kg science payload package requires 21 W of power and consists of seven scientific instruments. The Long Range Reconnaisance Imager (LORRI) consists of a visible light, high-resolution CCD Imager. The Ralph instrument is composed of two parts, a visible CCD imager (MVIC) and a near-infrared imaging spectrometer (LEISA). The Alice instrument is an ultraviolet imaging spectrometer. The plasma and high energy particle spectrometer suite (PAM) consists of SWAP, a toroidal electrostatic analyzer and retarding potential analyzer, and PEPSSI, a time-of-flight ion and electron sensor. The Radio Science Experiment (REX) will use an ultrastable oscillator to conduct radio science investigations. A student-built dust counter (SDC) will make dust measurements in the outer solar system. Total mission cost is planned to be under $550 million.

Launch of New Horizons
Into a cloud-scattered blue sky, NASA's New Horizons spacecraft roars off the launch pad aboard an Atlas V rocket spewing flames and smoke. Liftoff was on time at 2 p.m. EST from Complex 41 on Cape Canaveral Air Force Station in Florida. This was the third launch attempt in as many days after scrubs due to weather concerns. The compact, 1,050-pound piano-sized probe will get a boost from a kick-stage solid propellant motor for its journey to Pluto. New Horizons will be the fastest spacecraft ever launched, reaching lunar orbit distance in just nine hours and passing Jupiter 13 months later. The New Horizons science payload, developed under direction of Southwest Research Institute, includes imaging infrared and ultraviolet spectrometers, a multi-color camera, a long-range telescopic camera, two particle spectrometers, a space-dust detector and a radio science experiment. The dust counter was designed and built by students at the University of Colorado, Boulder. The launch at this time allows New Horizons to fly past Jupiter in early 2007 and use the planet's gravity as a slingshot toward Pluto. The Jupiter flyby trims the trip to Pluto by as many as five years and provides opportunities to test the spacecraft's instruments and flyby capabilities on the Jupiter system. New Horizons could reach the Pluto system as early as mid-2015, conducting a five-month-long study possible only from the close-up vantage of a spacecraft. (Courtesy NASA)

New Horizons Spacecraft
In NASA Kennedy Space Center's Payload Hazardous Servicing Facility, the New Horizons spacecraft rests on a work stand. New Horizons will make the first reconnaissance of Pluto and Charon - a "double planet" and the last planet in our solar system to be visited by spacecraft. The mission will then visit one or more objects in the Kuiper Belt region beyond Neptune. New Horizons is scheduled to launch in January 2006, swing past Jupiter for a gravity boost and scientific studies in February or March 2007, and reach Pluto and its moon, Charon, in July 2015. (Courtesy NASA)

Pluto/Charon
Artist's concept of the New Horizons spacecraft during its planned encounter with Pluto and its moon, Charon. The craft's miniature cameras, radio science experiment, ultraviolet and infrared spectrometers and space plasma experiments would characterize the global geology and geomorphology of Pluto and Charon, map their surface compositions and temperatures, and examine Pluto's atmosphere in detail. The spacecraft's most prominent design feature is a nearly 7-foot (2.1-meter) dish antenna, through which it would communicate with Earth from as far as 4.7 billion miles (7.5 billion kilometers) away. (Courtesy NASA/JHUAPL/SwRI)

Approaching Pluto
Artist's concept of the New Horizons spacecraft as it approaches Pluto and its three moons in summer 2015. The craft's miniature cameras, radio science experiment, ultraviolet and infrared spectrometers and space plasma experiments would characterize the global geology and geomorphology of Pluto and large moon Charon, map their surface compositions and temperatures, and examine Pluto's atmosphere in detail. The spacecraft's most prominent design feature is a nearly 7-foot (2.1-meter) dish antenna, through which it will communicate with Earth from as far as 4.7 billion miles (7.5 billion kilometers) away. (Courtesy NASA/JHUAPL/SwRI)

Juipter Flyby
Although the main mission of New Horizons is to explore the Pluto system and the Kuiper Belt of icy, rocky objects, the spacecraft will first fly by the solar system's largest planet, Jupiter, early 2007 - just a little over a year after launch. In this artist's rendering, New Horizons soars past Jupiter as the volcanic moon Io passes between the spacecraft and planet. (Courtesy NASA/JHUAPL/SwRI)

Kuiper Belt Object
Artist's impression of the New Horizons spacecraft encountering a Kuiper Belt object. The Sun, more than 4.1 billion miles (6.7 billion kilometers) away, shines as a bright star embedded in the glow of the zodiacal dust cloud. Jupiter and Neptune are visible as orange and blue "stars" to the right of the Sun. Although you would not actually see the myriad other objects that make up the Kuiper Belt because they are so far apart, they are shown here to give the impression of an extensive disk of icy worlds beyond Neptune. (Courtesy NASA/JHUAPL/SwRI)

Artist's concept of the New Horizons spacecraft during its planned encounter with Pluto and its moon, Charon. The craft's miniature cameras, radio science experiment, ultraviolet and infrared spectrometers and space plasma experiments would characterize the global geology and geomorphology of Pluto and Charon, map their surface compositions and temperatures, and examine Pluto's atmosphere in detail. The spacecraft's most prominent design feature is a nearly 7-foot (2.1-meter) dish antenna, through which it would communicate with Earth from as far as 4.7 billion miles (7.5 billion kilometers) away. (Courtesy NASA/JHUAPL/SwRI)