Nov. 3, 2009: The MESSENGER spacecraft's third flyby of the planet Mercury has given scientists, for the first time, an almost complete view of the planet's surface and revealed some dramatic changes in Mercury's comet-like tail.

"The new images remind us that Mercury continues to hold surprises," says Sean Solomon, principal investigator for the mission and director of the Department of Terrestrial Magnetism at the Carnegie Institution of Washington.

The probe flew by Mercury on Sept. 29th, executing a critical gravity assist maneuver designed to help MESSENGER enter Mercury-orbit in 2011. Despite shutting down temporarily because of a power system switchover during a solar eclipse, the spacecraft's cameras and instruments revealed 6 percent of the planet's surface never before seen at close range, including this picturesque region pocked by impact craters and molded by volcanic activity: 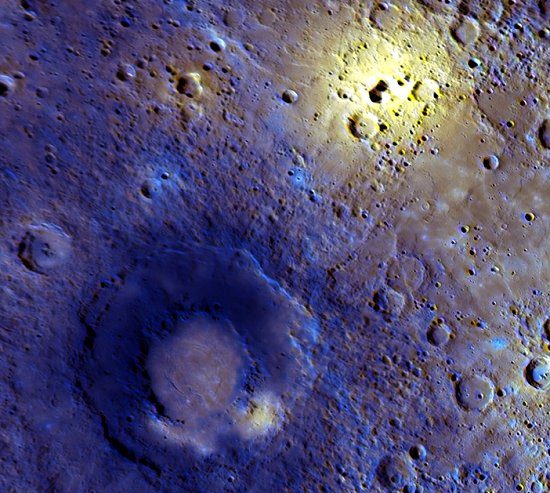 Above: This enhanced-color view was created with a statistical technique that highlights subtle color variations seen in the 11 filters of MESSENGER's wide-angle camera. The colors are often related to the composition of underlying material material. [more]

The bright region in the upper-right corner of the image surrounds a suspected explosive volcanic vent. The 290-km-diameter double-ring basin near the bottom of the image has a smooth interior that may be the result of effusive volcanism.

"This double-ring basin, seen in detail for the first time, is remarkably well preserved," notes Brett Denevi, a member of the probe's imaging team and a postdoctoral researcher at Arizona State University. "The inner floor of this basin is even younger than the basin itself and differs in color from its surroundings. We may have found the youngest volcanic material on Mercury."

One of the spacecraft's instruments conducted its most extensive observations to date of Mercury's ultrathin atmosphere or "exosphere." Material in the exosphere comes mainly from the surface of Mercury, knocked aloft by solar radiation, solar wind bombardment and meteoroid vaporization: diagram. This wispy gaseous envelope is stretched by solar radiation pressure into a long, comet-like tail, which seems to be changing as Mercury moves around the sun.

"A striking illustration of what we call 'seasonal' effects in Mercury's exosphere is that the neutral sodium tail, so prominent in the first two flybys, is now significantly reduced in extent," says participating scientist Ron Vervack of the Johns Hopkins University Applied Physics Laboratory in Laurel, Md.

Above: Mercury's comet-like tail as traced by neutral sodium atoms has substantially decreased in size since MESSENGER's 2nd flyby in Oct. 2008. The two panels are extended models fit to data sampled relatively close to Mercury. Click here to view the original data. [more]

"This difference is related to expected variations in solar radiation pressure as Mercury moves in its [elliptical orbit around the sun]," adds Vervack. "Mercury's exosphere is one of the most dynamic in the solar system."

The observations also show that calcium and magnesium in the exosphere exhibit different seasonal changes than sodium--a difference that researchers do not yet fully understand. After MESSENGER enters Mercury orbit in 2011, it can make a continuous study of seasonal changes in all exospheric constituents. That will provide key information on the relative importance of the processes that generate, sustain, and modify Mercury's atmosphere.

Approximately 98 percent of Mercury's surface now has been imaged by NASA spacecraft. After MESSENGER goes into orbit, it will see the polar regions, which are the only remaining unobserved areas of the planet.