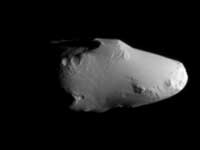 
Calypso [ka-LIP-so] and Telesto [tah-LESS-toh] are called the Tethys Trojans because they circle Saturn in the same orbit as Tethys, about 60 degrees ahead of and behind that body. Telesto is the leading Trojan and Calypso is the trailing Trojan. Both were found in 1981 by B. Smith through ground-based observations made in 1980. Calypso is 34 by 22 by 22 kilometers (21 by 14 by 14 miles).

Calypso Close Up
The Cassini spacecraft's February 2010 encounter with Calypso yielded this incredibly detailed view of this Trojan moon. Irregularly shaped Calypso is one of two Trojan moons of the larger moon Tethys; Calypso trails Tethys in its orbit by 60 degrees. See PIA07633 to learn more about Calypso and its fellow Tethys Trojan, Telesto. Like Telesto, Calypso's smooth surface does not appear to retain the record of intense cratering that most of Saturn's other moons possess (see PIA07702). This view looks toward the leading hemisphere of Calypso (21 kilometers, or 13 miles across). North on Calypso is up and rotated 1 degree to the left. The image was taken in visible light with the Cassini spacecraft narrow-angle camera on Feb. 13, 2010. The view was acquired at a distance of approximately 21,000 kilometers (13,000 miles) from Calypso and at a Sun-Calypso-spacecraft, or phase, angle of 75 degrees. Scale in the original image was 128 meters (420 feet) per pixel. The image has been magnified by a factor of two and contrast-enhanced to aid visibility. (Courtesy NASA/JPL/Space Science Institute) 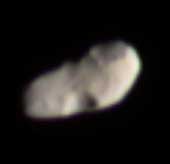 Colorful Cratered Calypso
This color image provides the best look yet at Saturn's moon Calypso, a Trojan (trailing moon) of the larger moon Tethys. Calypso trails Tethys in its orbit by 60 degrees.

Telesto is the other Tethys Trojan, orbiting Saturn 60 degrees ahead of Tethys.

Calypso is 22 kilometers (14 miles) across. Calypso, like many other small Saturnian moons and small asteroids, is irregularly shaped by overlapping large craters. Although the resolution here is not as high as in Cassini's best images of Pandora and Telesto, this moon appears to also have loose surface material capable of smoothing the appearance of craters.

Images taken using ultraviolet, green and infrared spectral filters were combined to create this false-color view. The images were taken with the Cassini spacecraft narrow-angle camera on Sept. 23, 2005, at a distance of approximately 101,000 kilometers (63,000 miles) from Calypso and at a Sun-Calypso-spacecraft, or phase, angle of 61 degrees. Resolution in the original image was 602 meters (1,976 feet) per pixel. The image has been contrast-enhanced and magnified by a factor of three to aid visibility. (Courtesy NASA/JPL/Space Science Institute)

Calypso
This was the best picture that was ever taken by the Voyager spacecraft of Saturn's moon Calypso. (Copyright Calvin J. Hamilton)