February 2, 2010: NASA's Hubble Space Telescope has observed a mysterious X-shaped debris pattern and trailing streamers of dust that suggest a head-on collision between two asteroids. Astronomers have long thought that the asteroid belt is being ground down through collisions, but such a smashup has never been seen before. 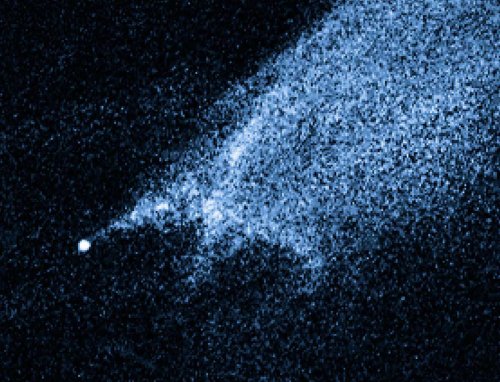 The object, called P/2010 A2, was discovered by the Lincoln Near-Earth Asteroid Research (LINEAR) sky survey on January 6, 2010. At first, astronomers thought it might be a so-called "main belt comet"--a rare case of a comet orbiting in the asteroid belt. Follow-up images taken by Hubble on January 25 and 29, however, revealed a complex X-pattern of filamentary structures near the nucleus:

"This is quite different from the smooth dust envelopes of normal comets," says principal investigator David Jewitt of the University of California at Los Angeles. "The filaments are made of dust and gravel, presumably recently thrown out of the nucleus. Some are swept back by radiation pressure from sunlight to create straight dust streaks. Embedded in the filaments are co-moving blobs of dust that likely originated from tiny unseen parent bodies."

Hubble shows the main nucleus of P/2010 A2 lies outside its own halo of dust. This has never been seen before in a comet-like object. The nucleus is estimated to be 460 feet in diameter.

Normal comets fall into the inner regions of the solar system from icy reservoirs in the distant Kuiper belt and Oort cloud. As comets approach the sun and warm up, ice near the surface vaporizes and ejects material from the solid comet nucleus via jets. But P/2010 A2 may have a different origin. It orbits in the warm, inner regions of the asteroid belt where its nearest neighbors are dry rocky bodies lacking volatile materials.

This leaves open the possibility that the complex debris tail is the result of an impact between two bodies, rather than ice simply melting from a parent body.

"If this interpretation is correct, two small and previously unknown asteroids recently collided, creating a shower of debris that is being swept back into a tail from the collision site by the pressure of sunlight," Jewitt says.

Asteroid collisions are energetic, with an average impact speed of more than 11,000 miles per hour--five times faster than a rifle bullet. The main nucleus of P/2010 A2 would be the surviving remnant of this so-called hypervelocity collision.

The asteroid belt contains abundant evidence of ancient collisions that have shattered precursor bodies into fragments. The orbit of P/2010 A2 is consistent with membership in the Flora asteroid family, produced by collisional shattering more than 100 million years ago. One fragment of that ancient smashup may have struck Earth 65 million years ago, triggering a mass extinction that wiped out the dinosaurs. But no such asteroid-asteroid collision has been caught "in the act"--until now.